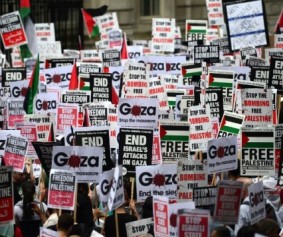 Left: Protesters display placards and banners as they take part in demonstration against Israeli airstrikes in Gaza in central London on July 19, 2014. (photo credit: AFP/Carl Court)

A View from the “Emergency Routine” under the Iron Dome – Prof. Haim Harari – These lines are written ten days after the beginning of the latest Gaza conflict and thirteen years since the Hamas started launching thousands of rockets from Gaza exclusively into Israeli civilian targets. It has also been nine years since Israel completely left the Gaza strip, and a few hours since the Hamas rejected two Egyptian cease fire proposals, and Israel launched a ground operation aimed at destroying Hamas offensive facilities. In Israeli towns, near the Gaza border, 13 year old children celebrated their Bar Mitzvah without experiencing, since their birth, even one day free of fear of rockets, always having 15 seconds to reach for an improvised cover. High school graduates, the class of 2014, never went to school or returned from school, since kindergarten, without a real threat of a Hamas rocket hitting them on the way. It is debatable whether the children’s stress or their parents’ anxiety has more damaging long term effects. It is a hard competition.…more…

Celebrating Ramadan – From the White House to Gaza – Rachel Ehrenfeld – Expressions of sympathy to Gazans, for having their Ramadan celebrations foiled by Israeli retaliations, highlight a prevailing ignorance of Islamic values, not only on the part of the American media. On July 9, in his “Ramadan Message,” President Barack Obama, once again, equated the the Islamic principles of Ramadan with American values: “I…know that Ramadan is a time of intense devotion and reflection…reciting and listening to the entire Koran over the course of the month. These rituals remind us of the principles that we hold in common, and Islam’s role in advancing justice, progress, tolerance, and the dignity of all human beings,” he said. Yet, the Koran and prayers recited by Muslims, are reminders to follow in the footsteps of the Prophet Mohammad, who we all know had nothing in common with our Founding Fathers or Abraham Lincoln. Canadian Imam Ahmed Shehab, who was linked to at least two of the 9/11 hijackers, set the record straight.…more…

Why Economic Sanctions Seldom Work – Norman Bailey – The prevention of the proliferation of nuclear weapons, particularly in the case of rogue countries such as North Korea and Iran, is a goal universally accepted by the international community. There is no such unanimity as to what to do to prevent it.  Diplomatic pressure, economic measures, and military action are all in the menu of possibilities. In the case of North Korea, all measures adopted were unsuccessful, and North Korea has constructed a full-fledged nuclear arsenal, which (along with increased Chinese assertion of various degrees of control over most of the East China and South China Seas), has resulted in increased military buildups in Japan, South Korea, Vietnam, the Philippines and elsewhere.  Why did the imposition of an extensive regime of economic sanctions, punctuated by periods of economic aid to North Korea in times of famine, fail to prevent its development of nuclear weapons capacity? Quite simply because the sanctions were never adopted universally or applied effectively, especially by China, which provided North Korea with the energy and food supplies needed to maintain a minimum level of societal functionality. The case of Iran is different.…more…

Hamas Uses Mosques in the Gaza Strip for Military Purposes – Meir Amit Intelligence and Terrorism Information Center – The use of mosques in the Gaza Strip for military purposes by Hamas and other terrorist organizations: The Al-Farouq Mosque in the Nuseirat refugee camp after being attacked on July 12, 2014, by the Israel Air Force. According to Israeli military sources, the mosque was used for storing rockets and weapons and as a compound for Hamas operations. The Arabic graffiti written on the wall reads “We will stand firm, Netanyahu. (Filastin al-’Aan, July 12, 2014).…more…

Backgrounder: Students for Justice in Palestine – Lee Kaplan – The Students for Justice in Palestine (SJP) today exists as a consortium of campus “clubs” throughout the American and Canadian college systems which work to oppose the existence of Israel and to promote Boycott, Divestment and Sanctions against the Jewish state. There are at least 80 chapters of these clubs on campuses throughout the US and Canada. The SJP goes under other assorted names on some campuses. Names such as Palestine Solidarity Committee or Students for Palestinian Equal Rights are also common. In Canada, some SJP chapters have adopted the name Students Against Israeli Apartheid (SAIA), or Solidarity for Palestinian Human Rights (SPHR), while others use similar sounding names but advocate for the Palestinian “revolution” or resistance against the Israeli and US governments when they are perceived as allies together against “Palestinian” irredentist goals. The SJP could be said to operate on the campuses in a classic Rico Statute style of infiltration as a method of promoting the Boycott, Divestment and Sanctions Movement throughout the USA and Canada via a “grass roots movement.”…more…

Horror Vacui – Sol W. Sanders – President Obama has given new meaning to that epithet “imperial presidency.” It was slung at Richard M. Nixon not only for his extravagant White House “palace guard” — some in kitschy uniforms — but for his more serious unconstitutional overreaching. But though imperial in his style, Mr. Obama reigns; he does not rule. Whether on domestic or foreign policy, Mr. Obama abdicates to congressional or bureaucratic control, then spins the resulting muddle as something for which he is not responsible.…more…

Hamas Is the Norm, Israel Is the Exception – David Goldman

Follow Stephen Harper’s Lead. The Canadian prime minister is showing the world how to take a principled stand for Israel. Unlike Obama, Harper has been unequivocal in condemning Hamas and supporting Israel – Larry Haas

Countering the ISIS Threat to Jordan. The kingdom can repel any direct military attack. It needs U.S. help to deal with terrorist subversion. – David Schenker

THE FEED: Kurds Ask for Western Weapons – The American Interest

Ace in the Hole? Is Obama’s Strategy on Iran Sound? – Walter Russell Mead

Israel and Hamas: Another Round of Conflict – Jim Zanotti, Specialist in Middle Eastern Affairs – July 15. 2014