Time to Shield the U.S. from EMP Threats 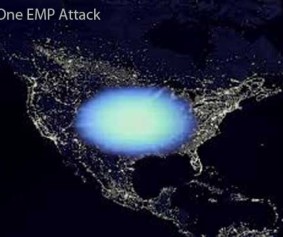 “Protecting the national grid could be accomplished at a cost to the average rate payer of merely 20 cents annually,” says Dr. Peter V. Pry.

Instead of fixating on George Zimmerman’s trial, the U.S. media would much better serve the public by probing real existential threats to the U.S. — threats that would leave them and us in the dark, unable to use any our sophisticated communication gadet, drive, fly, heat/or cool our homes, use our credit cards, obtain cash from the ATM machines, have no water or the services of other untilities, no funcutioning hospitals, no police, no nothing.

An electro-magnetic pulse (EMP) attack could do all this and more.  The nation’s vulnerability to  EMP attack created by the explosion of a nuclear device in the atmosphere, could shut down the electrical grid of the country for a very long time.

Ambassador R. James Woolsey, former Director of Central Intelligence, gave a sobering illustration and warning of this threat at the ACD/s April 9Washington briefing “Cyber Threats & the Economy.” It was hardly covered by the press (but you can read them here).

Dr. Peter V. Pry, who has been advising Congress on policies to counter Weapons of Mass Destruction for the last three decades has also published here: “EMP, Congress & The SHIELD Act.” Woolsey and Pry together described in an op-ed published by the Wall St. Journal last May, “How North Korea Could Cripple the U.S.”-–a single nuke exploded above America could cause a national blackout for months.

There is no excuse to risk millions of American lives by failing to protect the grid. The Congressional EMP Commission estimated robust EMP protection of the national electric grid can be accomplished by a one-time investment of $2 billion dollars–which is what the U.S. gives to Pakistan every year in foreign aid. The U.S. Federal Energy Regulatory Commission estimates that says Dr. Peter V. Pry.

Both Woolsey and Pry have urged Congress on several occasions to act swiftly to curtail the EMP threat. According to Pry: “The EMP Commission warned that, given our current state of unpreparedness, within 12 months of a catastrophic EMP event, some two-thirds to 90 percent of the total U.S. population, more than 200 million Americans, would perish from starvation, disease and societal collapse….

The SHIELD Act, introduced by Congressman Trent Franks (R-AZ) and co-sponsored by Congresswoman Yvette Clarke (D-NY), would implement one of the most important recommendations of the EMP Commission. SHIELD would empower the U.S. Federal Energy Regulatory Commission to require the electric power industry to protect the national grid from EMP. SHIELD would require industry to protect the grid by selective “hardening” of vital components by using surge arrestors, blocking devices, faraday cages and other proven technologies that the Department of Defense has known for fifty years can reliably protect military systems from EMP.”

Ambassador Woolsey has pointed out that other countries–among them Russia, Israel and the UK–have taken the EMP threat much more seriously than the U.S. and are hardening their electrical grids against potential pulse attack.

Meanwhile, U.S. focus seems to be almost entirely on cyber warfare and the effects of hacking on our defenses, but very little, if anything is done to protect our grid from an EBP attack.

A recent study by the Pentagon’s Defense Science Board concludes that cyber warfare poses such a serious ³existential threat² to the United States that Washington should be prepared to retaliate against an all-out cyber attack with a nuclear response. At least 33 nations are developing cyber attack and defense capabilities and integrating this new dimension of warfare into their military organizations, according to a United Nations survey.

Skeptics claim that the catastrophic scenarios envisioned for cyber warfare are grossly exaggerated, in part to justify costly cyber programs desired by the Pentagon and defense contractors. However, it is not widely understood that foreign military doctrines define cyber warfare as encompassing kinetic attacks, including electromagnetic pulse attacks that do represent an existential threat to the United States.

A January Defense Science Board study, “Resilient Military Systems and the Advanced Cyber Threat,” equates the consequences of an all-out cyber attack on the United States with the fallout of a nuclear attack and concludes that a nuclear response is justified to deter or retaliate against cyber warfare: “While the manifestation of a nuclear and cyber attack are very different, in the end, the existential impact to the United States is the same.”

The Defense Science Board is the Defense Department’s brain trust of scientists and strategic experts who advise the Pentagon on the most complex and important scientific and technical matters bearing on national security. The board’s cyber threat report ranks among the most in-depth studies it has ever conducted, having been 18 months in the making by a panel of 24 experts whose research included 50 Defense Department and intelligence community briefings.

Cyber warfare capabilities are proliferating worldwide. According to a study conducted in 2011 by the UN Institute for Disarmament Research, 33 nations including the United States, China and Russia have incorporated cyber warfare into their military organizations and planning for aerospace, land, sea and special operations.

U.S. Cyber Command is anticipating explosive growth despite government-wide furloughs and budget cuts. Cyber Command plans to quadruple in size by hiring 4,000 technology specialists over the next four years.

Gen. Jack Dempsey, chairman of the Joint Chiefs of Staff, recently warned that the United States must be prepared for the revolutionary threat represented by cyber warfare. “One thing is clear. Cyber has escalated from an issue of moderate concern to one of the most serious threats to our national security,” Dempsey cautioned. “We now live in a world of weaponized bits and bytes, where an entire country can be disrupted by the click of a mouse.”

Critics accuse government and industry of deliberately exaggerating the threat from computer viruses and hacking to keep revenue flowing to lucrative programs and cyber security contracts. Cyber security expert Bruce Schneier contends that “the threat of cyberwar has been hugely hyped” to keep growing cyber security programs at the Department of Homeland Security and new funding streams to Lockheed Martin, Raytheon, Century Link and AT&T, which are all players in the new cyber defense industry.

“Zero. That is the number of people who have been hurt or killed by cyber terrorism,” the Brookings Institution¹s Peter Singer wrote in November.

In “Reducing Systemic Cybersecurity Risk,” a study written for Europe’s Organization for Economic Cooperation and Development, authors Peter Sommer of the London School of Economics and Ian Brown of Oxford University note that natural EMP causing “a catastrophic cyber incident, such as a solar flare that could knock out satellites, base stations and net hardware” makes computer viruses and hacking “trivial in comparison.”

Exaggerated claims regarding the threat posed by computer viruses and hacking–such as Dempsey’s assertion that “an entire country can be disrupted by the click of a mouse”–mislead policymakers and the public about why cyber warfare really is an existential threat. Potential adversaries including Russia, China, North Korea and Iran have integrated cyber warfare capability into their military forces and are prepared to launch an all-out cyber attack as a joint military operation using all available means to disrupt and destroy information systems and critical infrastructure. That includes attacks by nuclear electromagnetic pulse, or EMP.

A single nuclear weapon detonated at high altitude over the United States would generate an EMP that could collapse the national electric grid and all the dependent critical infrastructure–communications, transportation, finance, food and water–that sustain modern civilization and the lives of millions. A nuclear EMP attack in the military doctrines of potential adversaries is defined as part of an all-out cyber attack or information warfare operation.

Computer viruses and hacking alone probably could not collapse the U.S. electric grid and other critical infrastructure and pose “with the click of a mouse” an existential threat to the nation. The now declassified Aurora experiment is the empirical basis for the claim that a computer virus might be able to collapse the national electric grid. In Aurora, a virus was inserted into the Supervisory Control and Data Acquisition System running a generator, causing the generator to malfunction and destroy itself.

However, using a computer virus to destroy a single generator does not prove it is possible or likely that an adversary could destroy all or most of the generators in the United States. Aurora took a long time to burn out a generator–and technicians were not allowed to intervene to save it as they would in a nationwide cyber attack, if one could be engineered.

Nor is there a single documented case of even a local blackout caused by a computer virus or hacking–which surely would have happened by now if vandals, terrorists or rogue states could attack U.S. critical infrastructure easily.

Even the Stuxnet worm, the most devastating computer virus so far, proved a disappointment. Stuxnet, reportedly jointly engineered by the U.S. and Israel to attack Iran¹s nuclear weapons program, succeeded in damaging only 10 percent of Iran¹s centrifuges for enriching uranium and did not stop or even significantly delay Tehran’s march toward the bomb.

The congressional EMP Commission warned in 2004 and again in 2008 that cyber warfare doctrine among potential adversaries includes nuclear EMP attack-an existential threat to the United States. Former CIA Director James Woolsey repeated this warning in May in testimony before the House Energy and Commerce Committee.

The January study by the Defense Science Board likewise concluded that cyber warfare is an existential threat not because of computer viruses alone: “[T]he cyber threat is serious and the United States cannot be confident that our critical information technology systems will work under attack from a sophisticated and well-resourced opponent utilizing cyber capabilities in combination with all of their military and intelligence capabilities (a ‘full spectrum’ adversary).”

Reinforcing this theme, a July 3 Russian military article on information warfare notes that a cyber attack can collapse “the system of state and military control [and] its military and economic infrastructure” because of “electromagnetic weapons.”

A 2011 U.S. Army War College study, “In The Dark: Planning for a Catastrophic Critical Infrastructure Event,” warned U.S. Cyber Command that U.S. doctrine should not focus on computer viruses to the exclusion of EMP attack and other information warfare threats posed by potential adversaries.

Cyber warfare poses an existential threat to the United States not because of computer viruses and hacking alone, but because the military doctrines of potential adversaries include plans for all-out information warfare operations involving a broad spectrum of military capabilities–including an EMP attack. U.S. cyber doctrine must be designed to deter and defeat the actual doctrines and plans of our real adversaries–not the preferred adversaries of our imagination.