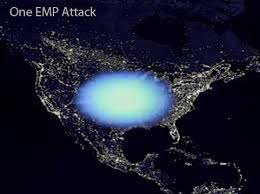 A one time investment of $2 billion – less than the cost of the 2012 Presidential election  – would provide our national electric grid robust EMP protection. Yet, Congress hasn’t passed the SHIELD Act.

On June 18, the Congressional EMP Caucus held a public event to launch the SHIELD Act that would protect the national electric grid from a natural or manmade electromagnetic pulse (EMP) It works like a super-energetic radio wave that can damage and destroy all electronic systems across vast regions, potentially across the entire continental United States. EMP is harmless to people in its direct effects. But it would create the failure of critical infrastructures that sustain our lives, such as electricity , water, communication and literately everything we depend on  today; trains will collide, planes could crash and ships could sink. Anyone with an implanted medical devise could die, banks will shut down as will their ATMs…and on and on.  Clearly, the indirect effects of EMP would be genocidal.

EMP is a high-tech means of killing millions of people the old fashioned way–through starvation, disease, and societal collapse.

An EMP can be generated by a terrorist or rogue state nuclear missile, perhaps launched off a freighter near our shores to preserve anonymity, and burst at high-altitude over the United States. In this manner, a single crude nuclear weapon, lofted by a primitive short-range missile, could generate an EMP that would destroy electronics and electric power everywhere, stopping the operation of the critical infrastructures–power, transportation, communications, banking and finance, food and water–that are vital to the existence of modern society and the survival of the American people.

Iran, the world’s chief sponsor of international terrorism, openly writes about eliminating the United States with an EMP attack, has conducted live missile launches simulating EMP attacks, and has practiced missile launching from a vessel in the Caspian Sea. North Korea, China and Russia also make no secret of their preparations to destroy the United States with EMP.

A ship-launched EMP attack by terrorists or rogue states would conceal the identity of the attacker, so we might never know who hit us.

An EMP can also be generated by the Sun. A solar flare or coronal mass ejection can generate a rare geomagnetic super-storm similar to an EMP attack from a high-yield nuclear weapon, with equally catastrophic consequences. The last geomagnetic super-storm was the Carrington Event of 1859, that caused worldwide damage and fires in telegraph stations and other primitive electronics–none of which were then necessary for societal survival.

A Carrington-class geomagnetic super-storm, that could collapse electric grids and critical infrastructures everywhere on Earth, is someday inevitable

The above findings represent the mainstream scientific consensus, first established by the congressionally mandated EMP Commission, which examined the nuclear and natural EMP threat for eight years, delivering its final report to Congress in 2008. The National Academy of Sciences subsequently independently re-examined the EMP Commission’s warnings about the consequences of a geomagnetic super-storm, and arrived at the same conclusion, and endorsed the recommendations of the EMP Commission.

Most recently, in December 2012, the National Intelligence Council, which speaks for the entire U.S. Intelligence Community, published an unclassified report Global Trends 2030 that warned an EMP is one of only eight “Black Swan” events that could change the course of global civilization by or before 2030. So there is an official consensus on the EMP threat within the U.S. Government studies, with no official study dissenting from the view that EMP is a potentially catastrophic threat that needs to be addressed urgently.

The EMP Commission warned that, given our current state of unpreparedness, within 12 months of a catastrophic EMP event, some two-thirds to 90 percent of the total U.S. population, more than 200 million Americans, would perish from starvation, disease and societal collapse.

The good news is that the EMP Commission provided a cost-effective plan, endorsed by all subsequent U.S. government studies, that could within a few years protect U.S. critical infrastructures from the worst effects of EMP. Indeed, protecting the 300 most important high-energy transformers that are indispensable to the national power grid is estimated to cost $100-200 million–about one dollar for every American life that would be saved. This alone is probably not sufficient protection, but it is the absolute minimum necessary to create the possibility of saving millions of American lives.

The SHIELD Act, introduced by Congressman Trent Franks (R-AZ) and co-sponsored by Congresswoman Yvette Clarke (D-NY), would implement one of the most important recommendations of the EMP Commission. SHIELD would empower the U.S. Federal Energy Regulatory Commission to require the electric power industry to protect the national grid from EMP. SHIELD would require industry to protect the grid by selective “hardening” of vital components by using surge arrestors, blocking devices, faraday cages and other proven technologies that the Department of Defense has known for fifty years can reliably protect military systems from EMP.

There is no excuse to risk millions of American lives by failing to protect the grid. The Congressional EMP Commission estimated robust EMP protection of the national electric grid can be accomplished by a one-time investment of $2 billion dollars–which is what the U.S. gives to Pakistan every year in foreign aid. The U.S. Federal Energy Regulatory Commission estimates that protecting the national grid could be accomplished at a cost to the average rate payer of merely 20 cents annually.

The electric grid is the “keystone” of the critical infrastructures as everything, all the other critical infrastructures that sustain our economy and our existence as a modern society depend, directly or indirectly, upon electricity. Enactment of the SHIELD Act and protection of the national electric grid will be a giant step forward toward securing our nation against the effects of an EMP catastrophe.

*Dr. Peter Vincent Pry, Executive Director of the Task Force on National and Homeland Security, a Congressional Advisory Board. He served in the Congressional EMP Commission, the House Armed Services Committee, and the CIA. His books Electric Armageddon and Apocalypse Unknown are available through CreateSpace.com and Amazon.com