Nuclear Threats on the Rise – Rethinking the Unthinkable 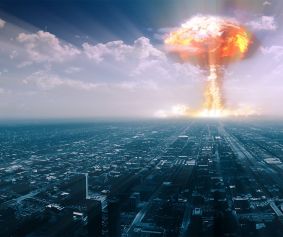 Today there are major imbalances between the new and expanding nuclear weapons research and production capacities of Russia and the declining capabilities of the United States.

The end of the Cold War brought many changes including the unification of Germany, the expansion of democracy into Eastern Europe, and the integration of Russia into the global economy. It also removed the previous five-decades-long worry about a nuclear war. “Thinking about the unthinkable,” that is, seriously contemplating nuclear war, has all but vanished from the minds of most people.

But given Vladimir Putin’s annexing of Crimea last spring and his boast in September that he could invade five NATO capitals inside two days, a Cold War 2.0 may be just around the corner. Putin’s actions come on the heels of the modernization of Russia’s nuclear weapons program. In stark contrast, the nuclear weapons research, testing, and production infrastructures of the United States have continued their rapid erosion through elimination and restructuring of organizations and reductions of workforces and budgets. These trends must be examined and evaluated.

This article was originally published as “Rethinking the Unthinkable” in National Security Science, Los Alamos National Laboratory on December 1, 2014.