New Calls for Jihad Against Russia 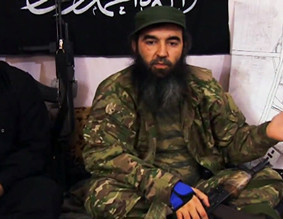 The Crimean Tatars opposition of Russia is nothing new. In 2010, they opposed the election of the pro-Russian Viktor Yanukovych as Ukraine’s president, and after he fled the country, more than 20,000 Tatars held a rally in support of the new pro-Western government.

Islamist proselytism of Crimean Muslims has increased since the fighting against Assad began in Syria. By early March 2014, at least 100 of them were reportedly fighting alongside the rebels in Syria. But since Putin’s invation of Crimea, Islamist leaders called all Muslims to jihad against Russia. More recently, Chechen Islamist leaders have been calling on Crimean Tatars to launch jihad against Russian forces in Ukraine. This time the call is to Muslims in the Ukraine and Crimea from the Army of Immigrants and Supporters, which is fighting in Syria.

1.   The Army of Immigrants and Supporters (Army of Immigrants) uploaded a video to the Russian-language website Akhbar Sham on May 13, 2014. It showed Salah al-Din the Chechen, commander of the Army of Immigrants, and his second in command, Abdul Karim Krymsky. After they had reviewed the fighting in Syria, Abd Karim Krymsky spoke directly to the Muslims in Crimea and Ukraine, appealing to them to wage a jihad against the Russian government,[1] similar to the jihad in the Caucasus, because the Russians humiliated them. He added that anyone who could not fight in Ukraine had to go to Syria to fight (See Appendix).

2.   Abdul Karim Krymsky is a Crimean Tatar who, along with other Ukrainians, joined a military formation called the Army of Immigrants, becoming commander Salah al-Din the Chechen’s deputy.[2] The Army of Immigrants has a hard core of Chechen and Caucasian operatives who regard themselves as part of a Caucasian body affiliated with Al-Qaeda and calling itself the Caucasian Emirate.

3.   In the video Abdul Karim Krymsky linked the jihad he and his operatives were waging in Syria to the recent events in Ukraine that led to the Russian annexation of Crimea. He said he himself was in Syria and not in Ukraine, but that jihad could be carried out anywhere, and the Ukrainian Muslims had to make the attempt (“It is sufficient to begin jihad and Allah will bring success.”). In our assessment, his call for jihad was meant to inspire the local Tatar population to carry out acts of terrorism and subversion against Russia. It illustrates the potential dangers for countries of origin (one of which is Russia) from the fighters in Syria. They gain military experience and absorb jihad ideology, which they can use when they return to their countries of origin, and in several cases is also used while still in Syria.

The Army of Immigrants and Supporters

4.   The Army of Immigrants and Supporters(jaish al-muhajiroun wal-ansar) is an Islamic jihadist military formation whose hard core is made up of Chechen and Caucasian fighters. It is affiliated with the Al-Nusra Front, the Al-Qaeda branch in Syria. According to various estimates, there are between 200 to 250 Chechens (and possibly more) fighting in Syria against the Assad regime. Among them there are some who participated in the rebellion against Russia in the 1990s, and are highly motivated and experienced. Some of them who joined the Army of Immigrants reached positions of command, and some were also killed in the fighting.

5.   As opposed to most of the foreign fighters, who are dispersed among the various military units, most of the Chechens serve in one organic unit. It was formed in March 2012 with the arrival of the first Chechens. It was originally called The Battalion of Immigrants (katibat al-muhajiroun[3]) and had strong connections to the Al-Qaeda branch, Al-Nusra Front. Among its members were also foreign fighters from Libya, Tajikistan, Turkey, Jordan, Saudi Arabia, and the occasional foreign fighter from the West. Its name was changed to the Battalions of Immigrants and eventually to the Army of Immigrants and Supporters.[4] Initially the formation was headed by a senior Chechen fighter named Omar the Chechen, until he deserted and joined the Islamic State in Iraq and Greater Syria (ISIS) at the beginning of 2014.[5] Since then the Army of Immigrants has been headed by a Chechen operative named Salah al-Din the Chechen (the commander who appeared in the video with Abd Karim Krymsky). Appendix Selections from the Video (Free Translation)

6.   Abd al-Karim Krymskysays that the events in Crimea and Ukraine are disturbing for those in Syria. All the Muslims in Crimea who think the Russians will leave them alone and allow them practice Islam are wrong. Actually, the Russians will persecute them until they give up their religion, he says. Thus he appeals to them not to believe promises of the good life they expect to have.

7.   He says that everyone knows the hadith according to which when a Muslim goes to wage jihad he leaves everything behind him: “Flee the one who persecutes you and go after the one who flees from you.” Therefore he appeals to his brother Muslims [in Ukraine], telling them to abandon all their secular trappings and to remember the obligations of Islam and their past. He says that today they know that no special conditions are necessary to wage jihad. It is enough to begin and Allah will bring success.

8.   He says again that Muslims continue to be humiliated in Ukraine while in Syria they are fighting proudly. All Muslims in Ukraine who are capable of waging jihad must try to do so. Those who cannot [act in Ukraine] must go to Syria.

9.   In addition, those who hope international organizations will help them, hope in vain. That is because those organizations only deal with politics. He added that in Syria there were also people who hoped to achieve success through negotiations and support from international organizations, but they have already been convinced that they were wrong. Given the conditions in Russia, [waging jihad] is the only path. He hopes that by joining forces and with the help of Allah, the problem in Crimea will be solved [i.e., through jihad]. The Battles in Syria

10.   Salah al-Din the Chechen describes the battles in the Al-Yarmoun neighborhood of Aleppo. He praises the achievements of the Army of Immigrants in battles, which, he says, have lasted for two years. He claims that today the Army of Immigrants has four military units. Three of them are in the battle zones and one is a secret reserve unit. He claims they are qualified professional soldiers with military experience.

11.   He also praises the religious faith of the Army of Immigrants fighters. He says that children from the age of 13 join their military training. They study religious subjects and then have military training. Today about 300 children are enrolled in the program. The school in which the children study has a reserve of 50 children younger than 13 would will also study Islamic themes to assure the next generation [i.e., the next generation of jihad fighters].

12.   According to Salah al-Din the Chechen, most of the Army of Immigrants operatives are not involved in the war between the various jihad organizations [the Al-Nusra Front and the ISIS], but focus on fighting the enemy, that is, the Assad regime. 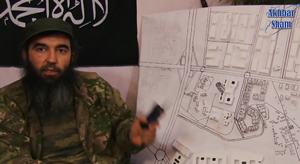 Abd al-Karim Krymsky, deputy commander of the Army of Immigrants, explains a battle in Syria (YouTube, Akhbar Sham, May 13, 2014).

[1]There are about 44 million Ukrainians, about 1%-2% of whom are Muslim, of them about 69,000 are Tatars. The Tatars living in Crimea are fundamentally different from the Tatars living elsewhere.

[2]At the time, the Syrian ambassador to Ukraine said that Ukrainian Tatars were also fighting in Syria. Mustafa Dzhemilev, the Ukrainian Tatar leader, confirmed that Tatars were participating in some of the battles in Syria on a volunteer basis. He said that one of them had been killed (Ukrainian Channel 5 TV, September 15, 2013).

[3]In Islam muhajiroun refers to Muslims who went with the prophet Muhammad from Mecca to Madinah, and were among his first followers.

[4]In Islam ansar refers to the supporters Muhammad found in Madinah, where he went with the “immigrants.”

[5]For further information see the April 15, 2014 bulletin ” Foreign fighters from various countries and regions in Asia, fighting against the Syrian regime, most of them in organizations affiliated with Al-Qaeda and the global jihad,” the section on Chechnya and the Caucasus. * Issued on: 22/05/2014 Type: Article