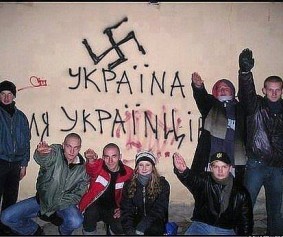 Blaming the Jews is a tradition in the borderlands of East Europe, where numerous governments and insurgency groups felt free to “use the Jews,” as the saying goes, blame them for whatever real or often trumped-up economic or other problem they failed to resolve, to divert their  critics’ attention, while massacring the Jews and often resettling the survivors against their will. So entrenched is this “tradition” that when there were no Jews to blame, others, non -Jews, were accused of hiding their Jewish identity and punished for that.  “Using the Jews” as sacrificial lambs has become a characteristic feature of totalitarian regimes there and elsewhere.

Yesterday brought news that disguised individuals with Russian flags or other insignias showed up outside a Donetsk synagogue after Passover prayers handing out leaflets in the name of the “Commissioner for Nationalities” in the Donetsk Regional Administration building, which is in the hands of Russian separatists. The leaflet required Jews over 16 years old to register with this new authority, pay a $50 fee to do so, and to provide a list of their property.  The leaflet also said that non-compliance would see their citizenship revoked, their assets confiscated, and their deportation.

The leaflet was signed by Denis Pushilin, self-appointed leader the pro-Russian “provisional government” in Donetsk.  U.S. Today, reported the leaflet “Says the reason is because the leaders of the Jewish community of Ukraine supported Bendery Junta, a reference to Stepan Bandera, the leader of the Ukrainian nationalist movement that fought for Ukrainian independence at the end of World War II, ‘and oppose the pro-Slavic People’s Republic of Donetsk,’ a name adopted by the militant leadership.”

Pushilin, curiously, denied that the leaflet was authorized by him, but didn’t deny that the leaflet came from his followers. This is strange because most commentators believed that the pro-Russian militants would utterly deny responsibility for the leaflet, dubbing it as yet another provocation from the “fascists” in Kiev to make the pro-Russians look like anti-Semites. Of course, Kiev, backed by the U.S. Ambassador to Ukraine, Geoffrey Pratt, has denied any and all alleged provocations.

According to Donetsk Rabbi Pinhas Vyshedski, the press secretary of the self-proclaimed [Russian] republic, Aleksander Kriakov, is “the most famous anti-Semite in the region.” Further, “Vyshedski wondered how separatists who are trying to position themselves as ‘anti-fascist’ and claiming it’s Kiev that¹s run by neo-Nazis could pick Kriakov as their spokesman,” reported the Daily Beast.

Given the vile history of anti-Semitism and Jew-baiting in Ukraine and Russia, either side could have been responsible for the leaflets.

In many ways, it doesn’t matter who created provocation. More important, of course, is its meaning for the Ukrainian Jews.  The unspoken suggestion that the Jews are on one side or the other of the conflict is putting them in danger.  Despite talks of new agreements with Moscow, Ukraine is unlikely to escape the violence that has been ubiquitous in its history, especially when Russia is promoting conflict in the eastern and southern parts of the country via propaganda and provocation.

Whether provoked or unprovoked, deliberate or accidental, that violence will continue a long history of suffering among numerous innocents. The Donetsk leafleting may presage nothing further.  On the other hand, the messier things get, both in rhetoric and actual conflict, the more likely it is that the Jews will be blamed for something by somebody, and if the past is of any indications, they will end up suffering or … dead.