Putin’s “Show of Power” in Ukraine 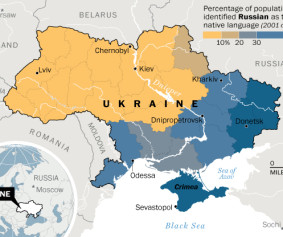 “Ukraine Must Reject Roots of Violence. If Ukrainians seek a brighter future, they must recognize, isolate and reject the inclinations to use violence that are now (emphasis added) deeply rooted in the country’s political culture…” said a recent publication by the Wilson Center. But violence in Ukraine is nothing new. Ukrainian history is riddled with massacre, pogroms and war. Peacefulness has never been a Ukrainian trait. Violence was and is.

Like all the “Bloodlands” between Russia and Germany, there is a long history of violence in Ukraine. According to the 2001 census, the country’s ethnic groups consisted of 77.8% Ukrainians, 17.3% Russians and relatively small percentages of Jews, Belarusians, Moldovans, Crimean Tatars, Bulgarians, Hungarians, Romanians, and Poles. These ethnic groups (especially Jews and those who call themselves Ukrainians) have seen the multitude of political, economic, religious and racial attacks, pogroms and provocations that accompany both military and non-military struggles for outside control and hegemony.

This fact of life about Ukraine was presaged by the revolt of Cossack Bogdan Khmelnytsky against the Poles in the 17th century.  Freedom from the Poles was apparently not enough for Bogdan to raise support, so he hit upon the clever idea of telling his recruits that the chief Polish sin was selling their lands to the Jews, whose presence in Ukraine began in the 8th century. Although many more Poles were killed in the uprising, at least 10,000 Ukrainian Jews were slaughtered.

Scapegoating national groups continued through the periodof the partition of Poland in the 18th century, all during the 19th century (while Russia attempted to control its borderlands), and into World War I and afterwards, during the Russian Civil War and the Russo-Polish war.  Then came WWII and Ukraine’s occupation by Germany and “liberation” by Russia.  The mere fact of occupation was proof enough to the Russians that Ukrainians had turned Fascist.

While Ukraine, which had always been multi-ethnic, multi-religious, and multi-national, suffered wholesale, historians often take statistics of the decline in the number of Ukrainian Jews as being most indicative of the German and Russian depredations in Ukraine. Estimates have it that there were 2.7 million Jews in Ukraine at the turn of the 20th century.  Now the number is put at 250,000, with some estimates going as low as 70,000.

Similarly, Ukraine’s Muslim Crimean Tatars, who were sent to Central Asia during WWII, have declined precipitously but 300,000 are still concentrated in Crimea.  As ACD senior fellow J. Millard Burr recently suggested, the return of Crimea to Moscow would very likely mean the utter suppression of the Sunni Muslim Tatars in Russia. (Many more Crimean Tatars live in Central Asia and Turkey, incidentally. The Turkish government has spoken up for the Tatars in the Crimea in the past few days.)

Conflict promoted from outside, especially from Russia, has in the past turned Ukraine into such a violent mess that only an external authoritarian power could pacify it.

The fact of Ukrainian victimization by violence raises the question of whether we will see it again now.  Already Putin has seemingly figured out that stirring up violence is the key to his retaining control over Ukraine. Moscow economist and commentator, Andrei Illarionov, has said that Putin will create civil war in Ukraine by pitting its Russian population against all the rest. He also said that Russia would not occupy Crimea, which it has.  But the question of whether Putin will stop at that and make other moves to create civil war in Ukraine is not yet answerable. And, of course, a wholesale Russian invasion is hardly out of the question either.

There are three ominous signs.  First was Thursday and Friday’s seizure of Crimea by pro-Russian politicians and military.  While the latter appeared at theairports and set up road blocks all over the place, they wore neither identifiable uniforms nor insignia. Apparently, Putin thought for a moment that making a Russian intervention “deniable” was to his advantage.  The pro-Russian politicians called on Putin to protect Russians in Crimea, claiming that paramilitary elements sent by Kiev were swarming (despite the complete absence of evidence that this was the case).  The Crimea Tatars would clearly wish to remain with Kiev, but they have not acted on that wish.

Second is the fact that Putin Friday won the agreement of the upper house of his Duma to deploy Russian troops in Crimea. It will not be hard for him to get the Duma’s approval for intrusions into the Eastern oblasts of Ukraine proper.  This action on Putin’s part has emboldened pro-Russian nationalists in Eastern Ukraine to spill into the streets to protest the deposing of Yanukovych, that is, if they weren’t led there by agents provocateur from Moscow. The latter is likely, as the Russians in Eastern Ukraine supported separation from Russia in 1991.

Ominously, there is apparently another bill being pushed in the Duma to allow Russia to “absorb and form new subjects.”  Russian commentator Irek Murtazin calls this the creation of a legal fiction to do an end-run around international law and absorb parts of neighboring states.

Third, Moscow is pumping out propaganda against the opposition that took Kiev and drove Yanukovych out.  The slurs against the opposition are of every possible variety and completely fantastic, and they are becoming increasingly specific. All of them are unverifiable.  For example, the Russian Foreign Ministry asserted that “unidentified gunmen directed from Kiev” had tried to capture the Crimean Interior Ministry headquarters overnight.  Kiev denies this and there are no reports that verify it. Ukrainian officials said things were quiet in Crimea overnight. Additionally, Putin, Lavrov, et al. are working the Russian public into a lather that will spread into the Russian population of Ukraine sooner rather than later.  Of course, Moscow’s greatest fantasy is that the Ukrainian opposition was encouraged, aided, and abetted by the United States and Europe. There have been reports that Putin is considering recalling the Russian ambassador from Washington.

Is civil war in Ukraine to Russia’s advantage? Putin knows that there is nothing anyone outside the immediate region can do to stop him from provoking unrest, then from pretending to step in and stop the violence as a kind of honest broker. Restoring Yanukovych will not occur (Putin hates him as much as any other troublesome Ukrainian), but a new government under Russian control will surely be set up.  The question is whether this new government will be in Kiev or Kharkiv.

‘Lest it be said that the portrait of Ukraine above is of a “rude and
barbarous kingdom” made so (forever after) by external intervention, we emphasize that there is a good deal of evidence that the Maidan opposition has been of a new sort for Ukraine. It is not characterized primarily by Ukrainian ethnic nationalists or anti-Russians or the anti-Semites of the Svoboda Party. Some of the evidence that shows this is a fact is the extent to which Ukrainian Jews have been involved.  In the past, they would have put themselves out of sight when such chaos occurred. In fact, at least one leading rabbi counseled Jews to stay home and, preferably, leave Ukraine altogether fearing that they would be caught in a maelstrom not of their own making (like always before). Whatever effect this counsel had on the Jewish community as a whole is not known, but apparently it has not discouraged the participation of young Jews in the Maidan. In many ways, the Maidan opposition reminds one of the Kosovars in the early 1990s.  They regarded themselves as Europeans and liberal democrats and believed the United States pointed the way to the future.

Of course, the United States barely bothered to support the opposition when the first violence broke out.  The White House was busy making plans to send Obama to Nelson Mandela’s funeral and turned the Ukraine matter over to Joe Biden, signaling that it was not a “big-enough deal” for the president to attend to. Reuben Johnson quotes his Ukrainian friends as saying at the time:

“‘Ronald Reagan would have known how to deal with Yanukovych,’ said one close friend, ‘he would have had him by the balls and screaming for mercy. What do we get out of this White House-one milquetoast declaration after another that the Administration ‘is against violence-kumbaya.’ But not a word about what they are prepared to do to stand up for these people dying on the barricades.'”

A number of commentators have said that Obama’s latest warnings to Russia will do nothing to deter Putin, because Crimea provides the Russian Navy access to the Black Sea. In addition, Ukraine under the Russian thumb, what Putin need to fulfill his aspirations to resurrect a Russian Empire. His strategy was similar to those taken by Lenin during the October 9, 1917 revolution. While the technology changed, the strategic target remain the same or adopts to reality. The success of Crimea take over, sounds similar to tactics used. First, civil unrest, followed by cyber attacks, following with cutting of communications and transportation venues. While the technicals are the same it’s hard to shake off the feeling that we may be witnessing a very real and unchallenged  grab for power that by a better equipped and wealthier nation. Putin, most like, chose the new feather to his hunting/fishing/skiing…cap.

In contrast to the Arab Spring, and perhaps even to Ukraine’s Orange Revolution of 2004, it may well be that the Ukrainian dissenters have grasped what freedom and responsible government means. While for months we have been hearing warnings not to take any actions that would upset Putin, it will double the tragedy of the most likely outcome of events if the U.S. and the West do not support the Maidan opposition at least in principle if not in action.

Ukraine: the Day After. How the United States can help, Jeff Gedmin: