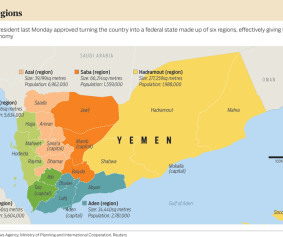 Yesterday’s attack that killed at least 20 Yemeni soldiers is the latest Al Qaida in the Arabian Peninsula’s (AQAP) atrocity in the region. It came at a time the country is debating the February 10 Regions Defining Committee’s decision to turn Yemen into “a federal state consisting of six regions—four in the north and two in the south.”  Yemen’s National Dialog Conference (NDC) ultimately agreed to 1400 articles and recommendations, some of which will now be incorporated in a constitution, which is due on March 2015.

A nation of six regions was determined to be a solution that is said to appeal to most of Yemen’s quarreling tribes. Three regions were carved from the North, two from the South, with one straddling both North and South (Tihama). In the South, the boundaries drawn for the Aden and Hadhramawt regions are rather clear-cut and seem to meet the demands of southern intransigents who previously demanded an almost unlimited political autonomy. Still, many politicians in the country’s South oppose the agreement. Aden province would include Abyan; Hadramawt province would include Al-Mahra, Shebwa and the island of Socotra.

Unfortunately, the northern borders were immediately rejected by Yemen’s Shia minority—commonly called the Houthi. Their leadership claimed that the proposed regions only cement Yemen’s existing uneven distribution of wealth. This really doesn’t mean much outside of the port of Aden and the capital Sana‘a, as Yemen is one of the world’s poorest nations.

The Houthi objection was not at all surprising as its armed bands started encroaching on neighboring regions well before the National Dialogue was initiated.  In fact, the Houthi revolt can be dated from 2004 when Sa‘ada, the Houthi homeland, literally exploded.  The result was an insurgency led by the Zaidi Shia religious leader Hussain Badreddin al-Houthi.  Before a cease-fire was reached in 2007, thousands were killed and 250,000 Yemenis displaced.  The cease-fire was followed in 2008 by a tenuous peace agreement with the government, which neither side respected.  The Houthis sought to gain control of their Sa‘ada homeland, and in so-doing displaced as many as 80,000 Yemenis, most of whom were Sunni Muslims.

March 2014 saw reports that a dozen fighters were killed as Houthis clashed with regular army forces close to Amran, a northern city that the Houthis seem determined to occupy as they have advanced from their northern mountain strongholds and pushed south toward the capital Sana’a.  Clashes will probably continue as the government fears a Houthi occupation of Amran would be followed by a siege of Sana‘a.

Following a day when well-armed Houthis “along with vehicles fitted with rocket launchers” paraded through Amran, the government sent orders to halt the entry of Houthis who seem determined to oust the “corrupt government” in Sana‘a. Observers were convinced that the Houthis had become the beneficiary of a recent shipment of Iranian arms.  Following the 2008 peace agreement, the rebels seem to have received modern arms, almost definitely from their Shiite brothers in Iran.  (The Zaidi are an offshoot of Shia Islam; one that is not rejected outright by the orthodox Iranian government.)

They have grown stronger since the 2012 ouster of President Ali Abdullah Saleh, and north of Sana‘a they have attacked both tribal militias and government forces with great success.  The result has left Saudi Arabia—which began air attacks on Houthi units following their 2009 cross-border raids—to speculate that Iran’s support of the Houthi rebels is an attempt to replicate the success they had arming the Shiite Hezbollah in Lebanon.  While the Houthi revolt predates any reported clandestine shipment of Iranian arms, in March 2011 U.S. Secretary of State Hillary Clinton told the Senate Appropriations Committee that Iran was “very much involved in the opposition movements in Yemen.”

Yemen was a failed state before the term became popular. As one tart-tongued Egyptian journalist put it in the 1960s, “Yemen is rushing pell-mell from the 12th to the 14th century.” The wonder is that it has managed to maintain its territorial integrity despite being confronted by Marxists, Arab Socialists, Hadhrami and Aden separatists, and now by Zaidi Shiite Houthi rebels and Sunni Islamists.  In the last case, the southern regions are a center of operations for AQAP (the former Aden-Abyan Islamic Army), whose nexus is at Zinjibar.  In March 2011 AQAP took control of that governorate and declared it an “Islamic Emirate.”

Despite being under constant threat of U.S. drones, AQAP continues its attacks. In a particularly notorious incident, in May 2012, an AQAP suicide bomber drove an explosive-laden vehicle into a school being used by armed Houthi in the Al-Jawf governorate.  At least fourteen people were killed.  AQAP quickly took credit for the event while declaring that Shiites were being targeted, “because they attacked our religion and the honor of our prophet and carried out criminal acts against Sunnis.”

Thus, one is led to conclude that despite the brave words following the conclusion of the National Dialogue, the battle to meld the aspirations of north and south Yemen and Sunni and Shia Yemenis will continue for years to come.

A map containing the boundaries is available here.