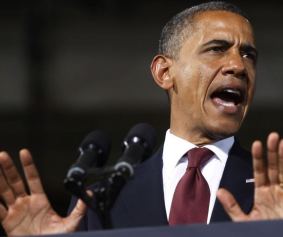 It used to be a joke among those of us student étrangers in Paris struggling with learning the French language and something about the French culture, a joke half seriously made, that it mattered less what you said in française as to how you said it.

We Americans, on the other hand, who were rarely effective vocal communicators – even our leaders with the exception of Wilson and FDR and Reagan – were sure our content was pithy with annotation and connotation. At least that was our conceit. It all had to do with our cultural history of our immigrant struggles for survival and success, our pioneering instincts, our work ethic which rarely depended on a silver tongue. And certainly not for us, the golden tongue.

Have times and custom changed?

Even President Barack Hussein Obama’s bitterest critics – and their number appears to be appreciating exponentially – admit that he has a way with words, and a microphone and teleprompter. He was quoted somewhere early in his career somewhat absent mindedly (or thoughtfully?) saying that it was, indeed, a gift, slightly intimating he, too, did not know whence it came.

The subject comes up now as we see the (granted, oft-misguided) polls which still reflect a substantial following for him. Among those who believe he is leading the country in the right direction, they, too, seem to admit the country isn’t going that way for whatever reason.

That loyal following, like any group of admirers, is prepared to excuse his indiscretions. And indeed, one has to wonder whether even he is aware of his frequent 180-degree turns in a statement of reality or his support for policies. I use that term for, again, is a lie a lie if the perpetrator does not know it is a falsehood? In the constant battle of ideas and the cross currents of strategy, power and policy, it is almost immediately a nest of contradictions. That’s why explanations and rationalizations of the failures of a leader or his policies or the politician’s abrupt about-turns can easily be concocted.

No, we are told, Obama’s recent decision to halt the threat (and the talking heads ignore that it is only a potential threat given the enormity of such an exercise) of deportation for millions of illegal immigrants was not a contradiction of his earlier twodozen public statements saying he could not do just that. Now, the apologists tell us, he was simply saying he could not fulfill the intention of the so-called immigration reform compromise legislation which came out of the Senate a half-year ago and has waited for any kind of up or down vote or committee compromise proposal in the House.

That would have been, they tell us, without question, too wide a change in public policy to be made by the chief executive rather than the people’s representatives in The Congress assembled. (Again, generally ignored by the talking heads is the complaint among a significant Republican minority in the House that the so-called Senate compromise only repeats earlier failed immigration solutions since it does not first and foremost attack the problem of how the illegals got here in the first place, and how more would not come with a repeat of an amnesty.) Nor as Heritage has just formulated, are his supporters  seemingly aware of the enormous cost of his act to the taxpayer.

Some of us certainly will not be around for the “kiss and tell” literature that one day, sometime in the now seemingly distant future, tells us what induced these sudden changes in fundamental public policy pronouncements. (How did a walk in The Jacqueline Kennedy Garden of the White House with the then National Security Adviser Tom Donilon reverse “a red line” publicly announced decision to intervene in Syria? Then there is the “not on the presidential staff” memory loss over knowing Jonathan Gruber, the seer on the health care package, who yet made more than one appearance in the Oval Office as well as frequent White House visits as a major consultant.)

It will also have to be left to historians to comment on whether the abrupt policy swings of the Obama Administration are greater or more consequential than those of earlier administrations. But certainly what is already apparent is that the noise level of this White House is greater than many before it. Words come quickly and are regurgitated abundantly on any and all subjects. And as often as not, we have the President as the principal source. That constant flow continues although there are signs of ennui in the general public. Did ratings or the anticipated loss of revenue dictate the recent refusal of the major networks to carry the President’s statement on his immigration decree?

With our once beloved filters of the word traffic, our carefully chosen daily newspapers, rapidly disappearing in the midst of technological change, the average listener/reader is bombarded with a constant flow of information and disinformation. Whether it is the old radio and TV or the internet and the new social networks, there is no dearth of  words demanding out attention.

And as the filters disappear, so does the power of discretion. It becomes harder and harder to discern what is important in public statements, much less whether they are simply made – as one suspects the President’s latest were – to drown out other news (the sweeping Republican midterm election successes).

And so more words on top of words. And that is my signal for a quick exit for the turkey and fixings which now demand attention.

* A version of this column was posted Monday, November 24, 2014, on the website yeoldecrabb.com.