Will Korea Be the Next Ukraine? 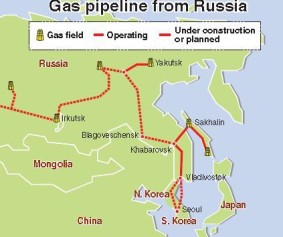 Washington’s eyes may be on the latest developments in the Keystone pipeline dispute and the Crimean Peninsula crisis, but a bigger story is unfolding, involving an entirely different pipeline and an entirely different peninsula. In a swift move to conquer another square on its geopolitical chess board Russia has just written off 90 percent of North Korea’s debt, a gesture estimated at $10 billion, in exchange for Pyongyang’s agreement to build a natural gas pipeline that would run from Sakhalin through North Korea to South Korea, the world’s second largest gas importer, with the goal of supplying South Korea with 10 billion cubic meters of gas annually, potentially raising its dependence on Russian gas from 6 to 30 percent. Indeed, while the U.S. invests a great deal of political capital on reducing Ukraine’s dependence on Gazprom its key ally in Asia might soon be heading in the opposite direction.

Moscow did not need to wait for the Ukraine crisis and the subsequent threats by American politicians and pundits that American gas exports should be used as a geopolitical tool against the Kremlin. Such proclamations are part and parcel of what could be referred to as faith-based-energy-policy as the U.S. does not have one terminal from which to export its gas and most of the countries under the Kremlin’s boot do not have the infrastructure to receive gas shipments. Russia has been engaged for years in efforts to diversify its gas sales to Asia and away from Europe including the construction of a pipeline to China and Japan and the aforementioned Russia-DPRK-ROK pipe. But for a variety of commercial and political reasons the projects did not pan out. Moscow’s sudden “act of generosity” toward North Korea indicates that Russia’s Drang nach Osten policy has kicked into higher gear. For the United States this might spell a new geopolitical setback.

There is an argument to be made that connecting the two Koreas in a gas pipeline would create a mutual dependency which could reduce tension and enhance peace and security in East Asia. The same logic of a “peace pipeline” guided the proponents of the Iran-Pakistan-India pipeline which has also been under negotiations for years. But in the case of the Koreas the exact opposite could happen.

Russia’s gift to North Korea’s leader Kim Jong-un is much more than money. It will effectively usher North Korea into a prestigious club of energy transit countries — Turkey, Georgia, Kazakhstan, Colombia to name a few — which serve as energy umbilical cords to economies larger than themselves. Should the pipeline be built, in good days Kim will be able to collect a nice chunk of money in transit fees but in his bad days — of which there are many — he will be able to coerce and intimidate the third largest economy in Asia-Pacific in ways that will make his missile and underground nuclear tests a fond memory. Keeping Kim in a box is an important component of President Obama’s Strategic Pivot in Asia-Pacific. Putin is throwing the despot the key to the box.

There is also a commercial aspect. As the United States is gearing to become a major exporter of LNG by the end of the decade, South Korea, a country with which we have a free trade agreement, is looked upon as one of the prime destinations for America’s gas. For the South Koreans piped gas from Russia will forever be more competitive than LNG from the United States.  Russia’s recent ploy could therefore pull the rug from under America’s aspiring gas exporters and particularly those currently taking the multibillion dollar risk of building new LNG terminals in the U.S.

Putin’s attempt to challenge the existing geopolitical terrain in the Korean Peninsula does not only aim to stick a thumb in Washington’s eye but also to send a signal to China ahead of his planned visit to Beijing next month Important as the South Korean market may be for Russia, China is a much bigger prize. China’s coal based economy is under enormous strains due to unbearable air pollution, and natural gas is viewed as a key component in China’s future energy basket. But China is poor in conventional gas reserves and Russia is the only neighbor China could count on for a long term large scale gas deal. The effort to run a pipeline from Western Siberia to North-Western China has suffered many cold starts over the past 15 years, mainly due to disagreements over price. Knowing how desperate Russia is now to diversify its exports away from Europe, the Chinese may perceive their hand to be stronger in the next round of price negotiations. Putin’s North Korean gambit aims to demolish this perception. His message: not only does Russia have an alternative client in the region but failure by Beijing to bend on price would plant Gazprom’s political machine right in the heart of China’s sphere of influence with all the attendant implications.

For now, the Russia-Korea pipeline is anything but a sure thing. Much needs to happen before the steel meets the ground. But Russia’s new bargain with Kim sheds light on what is likely to be its next set of moves. While the pipeline idea has been floating around for some years now, the United States has not taken a public position on it. In light of Russia’s recent conduct and in light of North Korea’s normal behavior, it should, and there is no better opportunity to do so than President Obama’s visit to Seoul next week.

While Pyongyang’s preparations to carry out a new nuclear test are likely to be at the center of discussion, the United States should have a well thought out position on its response should South Korea decide to go along with the project. At the same time Washington should formulate an alternative vision for South Korea’s energy security future, one that negates its need to tie itself to countries like North Korea and Russia. In this, the U.S. could find a common agenda with China whose interests too would be undermined by the Russia-Korea pipeline. Failure to kill the pipeline project in its infancy could face the U.S. with future challenges. Vladimir Putin has demonstrated how competent he is as a spoiler of U.S. foreign policy in Eastern Europe, the Middle East and Central Asia. Having his Gazprom muddling in the heart of the combustible Korean Peninsula is a spectacularly bad idea which America should resist with all vigor.

* Gal Luft is a member of the Board of Advisors of the American Center for Democracy. He is co-director of the Institute for the Analysis of Global Security (IAGS) and Senior Adviser to the United States Energy Security Council (USESC).