Where Are Today’s Maccabees? 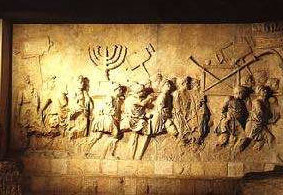 On this, the final day of Chanukah, as Jews worldwide complete their celebration of the Maccabee victory that liberated their Temple over two millennia ago, all Americans should remember our common love of liberty, the heritage that has set the West apart, and the common enemy that threatens our very existence and freedom today. We need modern Maccabees to preserve that heritage of liberty for our posterity. So may it be . . .

This is the last day of the 8-day Jewish Festival of Lights/Feast of Dedication, Chanukah, which this year began on Thanksgiving eve-a very rare event. Indeed, this was the first time since President Lincoln declared Thanksgiving to be a national holiday in 1863, and it reportedly will be 77,798 years before they can again be celebrated together.

Pity, because a frequent occurrence might lead many Christians who treasure their Judeo-Christian heritage to better appreciate at least one event from over four centuries between Old and New Testament times and the significance of the heritage of the 8-day long celebration. John 10:22-23 notes that Jesus was in the Temple during the Feast of Dedication-so if Jesus took it seriously, shouldn’t we Christians join our Jewish colleagues in its celebration every year?

In the first place, Chanukah and Thanksgiving both celebrate religious liberty: Chanukah celebrates a small contingent of Jewish Maccabees who, who over two millennia ago, triumphed over Greek oppressors who had banned the practice of Judaism and desecrated their Temple (the Second Temple) in Jerusalem, and Thanksgiving celebrates a small contingent of Christian Pilgrims that achieved religious freedom in the New World in 1620.

There’s more, much more-that you may know, but this engineer skipped too much history in my formative years and was delighted by what I learned from being prodded by Rachel Ehrenfeld’s Thanksgiving Blog, “Celebrating Freedom.”I found of particular interest an article by former Israeli Ambassador Yoram Ettinger to whom she referred, “Judah the Maccabee at West Point Military Academy.” I want to emphasize a major excerpt with you:

“The legacy of Chanukah – faith, patriotism, defiance of extreme odds and tenacity in the battle of liberty against tyranny – has underlined the American spirit since the early Pilgrims, enhancing the unique foundation of the US-Israel covenant: shared values.

“For instance, the statue of Judah the Maccabee, the hero of the Jewish rebellion against the Syrian-Seleucid Empire, is displayed at the West Point Military Academy, the most prestigious US military academy, founded in 1802. The statue of Judah the Maccabee, known for his principle-driven leadership and daring battle tactics, is displayed along with the statues of Joshua, David, Alexander the Great, Julius Caesar, Hector, King Arthur, Charlemagne and Godfrey of Bouillon – ‘the Nine Worthies.’

“George Washington became acquainted with the spirit of the Maccabees, upon settling, in December (Chanukah) 1777, at his new headquarters at Valley Forge, Pennsylvania, with ill-equipped, weary troops. Faced with a super-power, George III of Britain, Washington concluded that only a dramatic change could avoid a defeat. According to the diary entries of Louisa Hart, Washington told the Harts about a Jewish solider at Valley Forge who lit a Chanukah candle and explained its significance. Washington’s reaction was: “Perhaps we are not as lost as our enemies would have us believe. I rejoice in the Maccabees’ success, though it is long past…It pleases me to think that miracles still happen.” Six months later, on June 19, 1778, the Continental Army implemented the battle tactics of Judah the Maccabee, leaving Valley Forge in pursuit of the British, who were moving towards New York. Although the war would linger for five more years, Washington won a decisive victory.

“Benjamin Franklin, John Adams and Thomas Jefferson were inspired by the Maccabees, proposing “Rebellion against Tyrants is obedience to God” as the American official seal. Just like the Founding Fathers, the Maccabees were a tiny minority of “rebels” – condemned by the “loyalist/pragmatist” Jewish establishment – rebelling against an oppressive super-power. They prevailed due to their conviction-driven determination. They knew that swimming against the stream gets one closer to the source. The Maccabees were a role-model for Paul Revere, who was referred to as ‘a modern day Maccabee’ and the organizers of the Boston Tea Party, who realized that there were no free lunches for freedom-seeking nations.

“‘In God We Trust’ was inspired, also, by the Maccabees’ battle cry, which adopted Moses’ battle cry against the builders of the Golden Calf. A literal translation of the battle cry is ‘Whoever trusts God; join me!’ The Maccabees’ sacrifice and political-incorrectness, also, inspired Patrick Henry’s ‘Give me liberty or give me death.'”

Is there any doubt of the commonality of our historical interests and those whose antecedents were the Maccabees?

If so, then why are we at odds with the Israelis in assessing and addressing the existential threats posed by a nuclear armed Iran? Perhaps we have forgotten our heritage and common interests with the only nation in the Middle East that shares our love of liberty. Or perhaps too many Americans today never knew of it.

But, after all, the Iranian mullahs plainly say America is the Great Satan; Israel is only the Little Satan. They are coming after us both. See the excellent review of our current plight by my colleague Peter Vincent Pry in his Family Security Matters article earlier this week, “On Magical Thinking and the Doom of Nations.” As he concludes,

“Washington can talk all it wants, but the Mullahs will not give up the bomb just because sanctions have made the Rial worthless. The theocracy that celebrates the use of children as suicide bombers has a calling and a mission beyond this Earth that the Mullahs will never betray by surrendering their duty to redeem the world by Nuclear Jihad.”

Last Sunday, the chairpersons of the Senate and House Intelligence Committees, Sen. Dianne Feinstein (D-CA) and Rep. Mike Rogers (R-MI), also made a sober assessment in their joint appearance on CNN’s “State of the Union.” Widely reported was their bipartisan agreement that the United States is at greater risk of terrorist attack today than two years ago. Most notable was Sen. Feinstein’s less widely reported response to Candy Crowley’s question about what causes the “hatred” that makes our situation perilous:

“I think there is a real displaced aggression in this very fundamentalist, jihadist, Islamic community. And that is that the West is responsible for everything that goes wrong, and that the only thing that’s going to solve this is Islamic Sharia law and the concept of the Caliphate. And I see more groups, more fundamentalists, more jihadists more determined to kill to get to where they want to get. So, it’s not an isolated phenomenon . . . ”

Indeed, the Mullah’s hatred for Jews and Christians is in keeping with sharia-which places America and Israel (along with the rest of Western Civilization) in the “crosshairs for extinction.” So, we should be together in resisting this evil that seeks our destruction-there should be no daylight between us.

In the final words of his article, Ambassador Ettinger observes, “Pressuring the Jewish State to withdraw from the mountain ridges of Judea and Samaria defies the American story. Either you are with George Washington, Benjamin Franklin, Thomas Jefferson and other defenders of liberty, or you provide – inadvertently – a tailwind to the forces of tyranny.”

I fear the policies of the Obama administration are placing us in precisely that latter position. As previously argued, we should hope for the best, but prepare for the worst.

In particular, we should pay attention to an Iranian electromagnetic pulse (EMP) threat, build the most effective defenses possible and harden the electric power grid.

Finally, it is interesting to note that because of the vagaries of the Gregorian and Jewish calendars, Thanksgiving usually precedes Chanukah by such a time that it overlaps with the Christmas season-hence, the currently pervasive politically correct “Happy Holidays” greeting that ignores central features of both.

This year, however, the break before Christmas permits us to highlight similarities of Chanukah and Thanksgiving-and also to reinstate the distinctive “Merry Christmas” greeting, at least for this year.

And may we find modern Maccabees. Please . . .