What Should Israel Worry About? 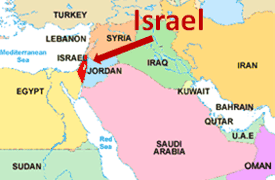 A former director of the Central Intelligence Agency recently stated that the intelligence community in the U.S. has a perfect record of identifying future threats: “We have never been right”. The one thing we know nothing about is the future. Nevertheless we have no choice but to try to peer through the fog and at least identify those potential threats which would seem most likely and try to position ourselves to confront them.

One thing we can be pretty sure about–the potential threats that get the most attention and publicity are probably not the ones that are in fact the most likely.

Illustration: If Iran achieves a nuclear capability, which now appears likely at some point, Israel must be prepared for a nuclear attack from Iran. Wrong. Israel has the most powerful armed forces in the entire MENA region (Middle East/North Africa). It has dozens of nuclear warheads. It has the missile capability to reach Iran and it has submarines in the Gulf capable of firing nuclear-tipped missiles, within a few miles of the Iranian coast. Targeting would not be a problem. It is extremely unlikely that Iran would initiate a nuclear war against Israel.

So what are the most likely external threats to Israeli security? I would argue that they are three:

(1) Either Hezbollah or Islamic State (IS) occupies the Syrian Golan and consolidates its positions there. If it’s Hezbollah and it is relieved of its current preoccupation with protecting the Assad regime in Syria, Israel can be attacked by Iran’s proxy terrorist army with tens of thousands of rockets from two directions simultaneously–the Golan and Lebanon. If it is Islamic State occupying the Syrian border region, the problem is simpler since it presumably would not simultaneously control southern Lebanon, would have many fewer rockets and would not be able to count on outside support. Nevertheless, such a development would be troubling–both Hezbollah and IS are sworn enemies of Israel, but only the IS people are psychotic. Israel is well-aware of this potential threat and has stationed substantial forces in the Golan as well as along the Lebanese border.

(2) Although as we have seen a nuclear missile attack from Iran is extremely unlikely, we can assume that once Iran has such a capacity it will move on to develop the capability of miniaturizing its nuclear arsenal. North Korea this year announced it had achieved that capacity after years of development. We can assume that the North Koreans will put their technical knowledge and capabilities at the disposition of the Iranians as they have in the past, drastically cutting down their development time. To introduce a miniaturized nuclear device into Israel at present, if not easy, is certainly feasible. To counteract this potential threat will require a hi-tech fence along the entire Syrian/Lebanese frontier, as currently exists on the Egyptian and Gazan borders and is being constructed along part of the frontier with Jordan.

(3) Perhaps the most frightening potential threat of all would be an overthrow of the al-Sisi regime in Egypt and its replacement by a Jihadist government. At present security and intelligence collaboration between Egypt and Israel is excellent, and Hamas is hemmed in by both countries. A Jihadist government in Cairo, actively collaborating with Hamas, would be a true nightmare and require heavy reinforcement of the southern borders, perhaps at the same time they will need to be reinforced in the north.

It has been noted, not least in these columns, that in fact and paradoxically, much of the current chaos in the Middle East actually benefits Israel, at least in the short- and perhaps medium-term. Other recent positive developments include the resolution of the offshore natural gas controversy and the budding Cyprus/Egypt/Israel consortium to exploit the resource on a regional basis. The passage of the budget putting to rest for the time being the excruciatingly difficult choice between defending the country and having a country worth defending, is another positive development. But security planners can never rest. Within the constraints of available present and likely future resources for the purposes of defense and security, all possible threats must be carefully analyzed and measures taken to confront them.

* This commentary  will be published in Globes.