UNRWA – The Hand that Feeds Palestinian Terrorists (With Our Money) 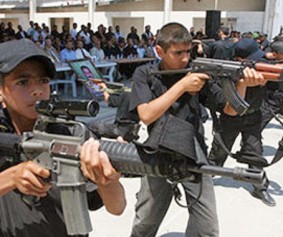 UNRWA has always denied links to Palestinian terrorism, or downplayed the significance of the relationship. As UNRWA’s former Commissioner, Peter Hansen, told the Canadian Broadcasting Corporation in October 2004, “I am sure that there are Hamas members on the UNRWA payroll, and I don’t see that as a crime.”

UNRWA began its emergency food and shelter aid programs to Palestinian refugees in the West Bank, Gaza, Syria, Jordan, and Lebanon in May 1950. Over the years, though its official mandate hasn’t been modified, UNRWA has been providing governmental and development services. UNRWA’s former legal advisor and general counsel, James G. Lindsay, published an important study in 2009: “Fixing UNRWA: Repairing the UN’s Troubled System of Aid to Palestinian Refugees.” Mr. Lindsay shows how UNRWA changed its function from “status-based” (treating Palestinians as refugees) to “need-based” (treating Palestinians as dependents). More than six decades later, and despite the establishment of an independent Palestinian governing body, UNRWA continues to operate in parallel with the government, both in the PA-ruled West Bank and Hamas-ruled Gaza.

Since then, despite repeated promises to cut off funds to Hamas, international aid organizations and many countries have continued funneling money to Gaza, purportedly as humanitarian aid, but more recently to fund the “Gaza Administration.” Hamas’s rule over Gaza does not seem to be an obstacle to funding it.

Although the designation of Hamas terrorists as individuals is lacking, the organization and its various entities are designated by the Treasury Department on its Specially Designated Nationals List (SDN). But the UN does not list Hamas as a terrorist organization at all. It only lists the Taliban and al Qaeda as terrorists. A May 2009 U.S. Government Accountability Office (GAO) report included UNRWA’s admission that it does not screen prospective staff or aid recipients for ties to Hamas, Hezbollah, Islamic Jihad (IJG), or other local terrorist groups.

“According to UNRWA, the UN Security Council has various working groups for terrorism-related issues, but the Sanctions Committee’s UN 1267 list is currently the only such UN terrorist screening list available…. The list is limited to those individuals or entities affiliated with Al-Qaida and the Taliban and thus does not specifically include major regional groups, such as Hamas and Hezbollah, which the United States has designated as foreign terrorist organizations.”

By the end of 2007, UNRWA employed more than 29,000. Less than 200 were listed as “international,” the rest were Palestinian, organized in unions. UNRWA’s Arab workers union is controlled by Hamas. In 2003, Hamas won more than 90 percent of the votes. In 2005, UNRWA provided a large increase in salaries for its thousands of workers. Since HAMAS deducts three to five percent of the UNRWA-paid annual salaries as membership fees, the raise contributed directly to Hamas’s coffers. Through another affiliate, the Islamic Bloc, Hamas also controls the UNRWA teachers union and UNRWA-funded schools.

UNRWA facilities and personnel have also been tied to numerous terrorist attacks on Israel. Its schools have been used as meeting places for Hamas terrorists and weapons storage, and UNRWA’s Hamas-affiliated staff members have used UNRWA equipment to transport arms for use in terrorist activities. For example, IDF-captured documents and evidence during Operation Cast Lead in 2008 showed that the UNRWA school compound across from the Nasser Hospital in Khan Yunis was used by Hamas to launch rockets into Israel, and that other UNRWA schools were used to store weapons and to hide Hamas operatives.

On January 12, 2009, Israeli Public Security Minister Avi Dichter stated that Shifa Hospital, Gaza City’s main medical center, had become the de facto Hamas headquarters, and that: “Shifa Hospital has long ago ceased to be just a hospital, just as the UN humanitarian and health services in Gaza long ago ceased to be just humanitarian services providing food and medical services.” Still, UNRWA’s response was: “Where any abuse of UN installations is discovered the UN carries out disciplinary action, including dismissals.” The known number of rockets found and fired from UNRWA facilities shows that the disciplinary measures, if any, were ineffective.

Not surprisingly, in January 2011, Hamas announced that it won 70.5 percent of the Gaza’s Nursing Association’s representatives’ vote. Their competitors, another terrorist designated group, the Islamic Jihad (IJG), won 29.5 percent. UNRWA pays their salaries.

In 2009, following Israel’s operation Cast Lead, conducted to stop Hamas and Islamic Jihad rocket attacks on Israel, the European Commission pledged at least $554 million to Gaza in “humanitarian aid.” In June 2010, the Obama administration promised $400 million in aid to the West Bank and Gaza. In March 2009, the U.S. pledged $300 million earmarked for Gaza and $600 million to the West Bank. Arab countries such as Saudi Arabia, Qatar and the UAE promised billions more.  Their promises get them lots of publicity, while they let the West foot the bill. UNRWA annually transfers about $200 million in cash to Gaza.

UNRWA does not rely only on pledges. The UN agency raises money for Gaza through its website, with payments going through WorldPay (part of the Royal Bank of Scotland Group), the Arab Bank PLC in Gaza, and HSBC in Amman, Jordan. Those funds come in addition to UNRWA’s annual budget ($400 million). How much of it goes to Hamas?

Moreover, the PA has been transferring millions to Gaza (allegedly paying loyal former PA employees, many of whom showed up also on the Hamas payroll). Former Prime Minister Salam Fayyad admittedly transferred $120 million a month from the PA budget (most of which comes from foreign aid) to Gaza. In September 2010, he openly stated that he had sent Gaza $4.3 billion over the previous three years, part of which pays the salaries of Hamas municipal employees. According to Mr. Fayyad, 54 percent of the PA’s $3.17 billion 2010 budget went to Gaza. Yet, he was highly praised as a “reformer.”

Incredibly, UNRWA, having long violated and subverted U.S. principles and interests, continues to call its own tune, while the U.S. pays for it.

U.S. contributions to UNRWA have totaled more than $4.9 billion since it’s inception in 1950…[and] have averaged over $200 million annually since 2007. On July 3, 2014, the GAO’s report on U.S. Foreign Aid to the Palestinians noted: “It is unclear whether the PA government established in June 2014 is either subject to the ‘undue influence’ of Hamas or ‘Hamas-controlled,’ thus potentially triggering the conditions on U.S. aid cited above.” The report noted that just before Hamas began shelling Israel with rockets most recently, the Obama Administration did “not appear to have made a determination that either undue influence or Hamas control applies in this case.”

If the U.S.’s long history of beefing up the Palestinians, the complete disregard to the Palestinian Authority’s support of Hamas’s agenda, the Administration’s more recent efforts to assist the Muslim Brotherhood everywhere, and its attempt to stop Israel’s dismantling of the terror pit in Gaza are any indication, rest assure they’ll find a way to continue sending U.S. taxpayer money to Gaza, directly and through UNRWA.