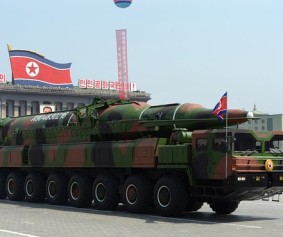 Concerns about a possible electromagnetic pulse attack on the United States are not new. No serious steps were taken to mitigate such threat because the U.S. assumes that major adversaries capable of such an attack–Russia and China–are not likely to.

However, the new ballistic missile capabilities in Iran and North Korea, have raised the level of awareness. Both present a real threat of an EMP attack. Both rogue states have the technical know-how and, as importantly, their leaderships have shown themselves willing and capable of irrational behavior.

In the article below, former Director of Central Intelligence R. James Woolsey and Dr. Peter V. Pry focus on the North Korean threat. Given that an EMP attack will incapacitate our electric grid, it will be the ultimate form of economic warfare; It will not only devastate the economy, but also cause the death of millions of Americans.

Woolsey, a member of ACD’s Board of Directors, dramatically demonstrated the effects of an EMP attack on the U.S. population and addressed the need to harden the electric grid against such attacks at ACD/EWI’s April 9 briefing on CyberThreats & The Economy. His remarks can be viewed onYouTube.

Woolsey and Pry are not alone. Others have spoken up about the vulnerabilities of U.S. missile defense. It lacks destroy-on-launch capabilities, can only destroy in mid-to-late payload delivery, and our missile defenses are limited to only meeting intercontinental ballistic attack from over the North Pole. But North Korea has shown the ability to put a satellite in orbit over the South Pole. And an EMP device launched from such a satellite would be unstoppable.

We anticipate hearing much more on EMP attacks in the near future. Not only because Iran and North Korea are likely to exhibit more worrisome technological advances, but because additional uses of EMP will come into play. We know, for example, that less powerful EMP generating devices with the ability to effect more specific target areas are being developed. These can be used against earth-bound military targets such as radar installations and anti-aircraft missile sites. Moreover, EMP weapons could be used against satellites. Military and GPS satellites would of course be targets. Commercial, un-hardened satellites transmitting financial data could be easily attacked. The rapid development of Iran’s and North Korea’s long range ballistic missile technologies is a wake up call  to urgently update and harden our satellites and electric grid.

How North Korea Could Cripple the U.S.-

A single nuke exploded above America could  cause a national blackout for months.

Over the past three days, North Korea has launched six short-range guided missiles or projectiles in tests that landed in the Sea of Japan. The launches were of a piece with Pyongyang’s springtime custom of muscle-flexing, undertaken to extract concessions from the West in exchange for stopping the provocations. The Obama administration would do well to ignore these minor fireworks and focus on the much greater threat of a long-range North Korean missile carrying a nuclear warhead.

So far President Obama has seemed content to parry North Korea’s thrusts, much as his White House predecessor did. The George W. Bush administration did not distinguish itself in recognizing, or acting on, the danger from North Korea. Last month, in a worrying sign of similar detachment, Mr. Obama essentially dismissed the Defense Intelligence Agency conclusion that North Korea has probably been able to fit a nuclear warhead on a missile. He certainly did not suggest that he would consider a pre-emptive strike to halt the North Korean nuclear program.

The president may want to rethink that position.

Much has happened since 2006, when former Secretary of Defense William Perry and now-Deputy Secretary of Defense Ashton Carter urged President Bush to pre-emptively destroy North Korea’s long-range Taepodong 2 missile on its launch pad in a surgical strike with conventional weapons. Writing in the Washington Post, they advocated drawing “a line in the sand” against North Korea’s test of a missile designed to deliver nuclear weapons against the United States.

Two years later, Messrs. Perry and Carter were still advocating such a strike against any North Korean attempt to test an intercontinental missile: The “Administration has tried to play down the mounting danger posed by North Korea,” they wrote in 2008, and critics “say that a pre-emptive strike is too risky. But if the U.S. is ever going to defend a line in the sand with North Korea, that is the least provocative way to do it, and next time will only be riskier.”

Mr. Bush didn’t follow their good advice, and today Mr. Obama faces a more serious and imminent nuclear-missile threat from Kim Jong Un’s regime. Since 2006, North Korea has had at least three apparently successful nuclear tests and orbited a satellite, thus fulfilling the basic technological needs for an intercontinental ballistic missile that can deliver a nuclear warhead against the U.S.

Miniaturizing a warhead to fit on a missile is not an overwhelming technical obstacle. Far greater technological challenges are building and testing nuclear weapons and developing a long-range missile that can send a satellite into orbit. Compared with these feats, warhead miniaturization is easy.

North Korea needs only one ICBM capable of delivering a single nuclear warhead in order to pose an existential threat to the U.S. The Congressional Electromagnetic Pulse Commission, the Congressional Strategic Posture Commission and several other U.S. government studies have established that detonating a nuclear weapon high above any part of the U.S. mainland would generate a catastrophic electromagnetic pulse.

An EMP attack would collapse the electric grid and other infrastructure that depends on it-communications, transportation, banking and finance, food and water-necessary to sustain modern civilization and the lives of 300 million Americans.

EMP effects can be made more powerful and more catastrophic by using an Enhanced Radiation Warhead. This is a low-yield nuclear weapon designed not to create a devastating explosion, but to emit large amounts of radiation, including the gamma rays that generate the EMP effect that fries electronics.

The EMP Commission warns that, “Certain types of relatively low-yield nuclear weapons can be employed to generate potentially catastrophic EMP effects over wide geographic areas, and designs for variants of such weapons may have been illicitly trafficked for a quarter-century.” An EMP attack could plunge our electricity-powered civilization into a blackout lasting months or years.

One problem is that the Obama administration canceled the only two U.S. boost-phase interception programs, declining even to fund further study of boost-phase or space-based defensive systems. All U.S. Ballistic Missile Early Warning radars and interceptors are currently positioned and located to intercept a missile strike in the middle or the late part of its trajectory, coming from the north polar region.

However, North Korea has shown the ability to launch toward the South Pole and send its satellite into orbit across the south polar region. The U.S. currently has no missile defense assets, no early warning radars and no interceptors devoted to stopping a missile coming from the south. Where a satellite can go, a nuclear warhead can also go. North Korea orbited its satellite at an altitude optimum for an EMP attack on the contiguous 48 United States.

A surgical strike to prevent North Korean development of an ICBM has never been more urgent. Such a strike would draw a necessary line in the sand for North Korea-and Iran. The U.S. should also follow the good example of its allies in South Korea, Taiwan, Israel and the United Kingdom and harden its electric grid against EMP attack.

Mr. Woolsey, a former CIA director, is chairman of the Foundation for Defense of Democracies and a venture partner with Lux Capital. He is also a member of the Board of Directors of the American Center for Democracy/Economic Warfare Institute. Mr. Pry is executive director of the Task Force on National and Homeland Security and served on the congressional EMP commission.

This article originally appeared in the Wall Street Journal on May 20, 2013.