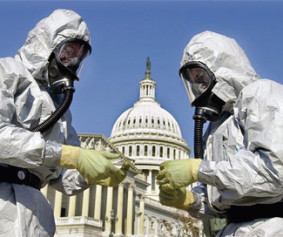 In a recent report to Congressional Committees on Biological Defense, the General Accountability Office (GAO) revealed that the Defense Department has not followed its own directive to update its list of biological agents that pose the greatest threat to the military.

The DoD list on new biological threats serves as a guideline for the government’s investments in countermeasures such as vaccines and new drugs. Yet, it has only been updated twice since its creation in 2000.  The GAO reports that Pentagon officials stated they were under the impression that the DoD directive was no longer in effect.

Billions of of dollars were spent by the DoD from 2001 to 2013 on research and development of medical countermeasures.  However, without updated lists, GAO was not able to determine whether DoD was dealing with the latest deadly biological agents.  Even in the years that DoD did update the list, the GAO audit found that it didn’t reach out to  the department’s Chemical and Biological Defense Program and other concerned agencies.

The DoD’s classified list names 19 biological agents. But only four had available countermeasures and several others appear to be at an advanced stage of development.

The GAO noted that the DoD and the Department of Homeland Security (DHS) have established processes for identifying biological agents that pose domestic threats. But the lack of information from DoD, and the absence of medical countermeasures program to prepare for pandemics and bioterror attacks in coordination with the Department of Health and Human Services, makes it impossible to know whether both programs are covering the ground necessary to protect the U.S. military and civilian population.

From fiscal years 2001 through 2013, the Department of Defense (DOD) received over $4.3 billion in total funding (in constant fiscal year 2013 dollars) to research, develop, and make available medical countermeasures that respond to biological threat agents. Of that $4.3 billion, approximately $3.75 billion was for the research and development of new medical countermeasures.

CBDP has taken steps to increase transparency and improve coordination practices within DOD to allocate resources to address biological threats. In response to concerns raised by military service officials that CBDP was not completely transparent in how it prioritized requirements and made resourcing decisions, CBDP issued a business plan in 2012 to update its coordination methods. While military service officials were supportive of CBDP’s actions, they stressed the need for continuing dialogue and collaboration in the future.

DOD’s efforts to coordinate with the Department of Health and Human Services (HHS) and the Department of Homeland Security (DHS) align with best practices GAO has identified for collaborating across agency boundaries—specifically, to leverage available resources; establish mutually reinforcing joint strategies; and develop compatible policies, procedures, and other tools to operate across agency boundaries. DOD, HHS, and DHS share a joint research campus—the National Interagency Biodefense Campus at Fort Detrick, Maryland—to study biological threat agents. The campus has its own governance structure, which allows the agencies to leverage available resources and facilitate scientific exchange. Senior leaders at DOD and HHS also have developed interagency agreements and other tools that facilitate communication on the various stages of medical countermeasure development. Finally, DOD and DHS have established processes for identifying biological agents that pose domestic threats and risks.

The full GAO report may be found here.