U.S. Lost in the Mideast Swamp 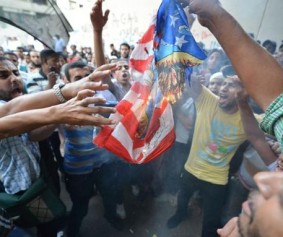 The Obama Administration’s Middle East policies – it would be foolhardy to call them “strategy” – would be ludicrous were they not so threatening to American interests, regional and world stability.

The latest permutation is Washington’s position against the Egyptian military and its satellite, hopefully provisional, civilian government. Washington’s insistence that the discredited, ousted, and now imprisoned Mohamed Morsi be treated as a legitimate political figure, serving Egyptian or American interests, is highly questionable. Morsi was quintessential: a Third World Muslim dictator-apprentice, promising one man, one vote-one time.

In a year Morsi proved that he was incapable of halting the race toward economic collapse. Instead, off camera, he pursued radical jihadist traditional goals of his once secret Moslem Brotherhood. In due course, the always fickle Arab street turned on him, re-endorsing the military. Only months ago they were discredited after seven decades of corrupt and increasingly despotic rule under the ageing and ailing Hosni Mubarak. But Washington’s attempt to restore an imaginary democratic process in Egypt with State Department statements at the noon press briefing was even more ridiculous.

Meanwhile, Washington relations with the Egyptian military, the only national institution, have deteriorated in the face of the Obama Administration’s ambiguities. Although Cairo’s role as the pacesetter for the Arab and Sunni world may have eroded significantly, Egypt remains a cornerstone for any strategy in the Mideast. The intervention on behalf of Morsi and an on-and-off game of authorizing continuing F-16 and other military shipments under billion-dollar-plus annual, mostly military, aid has only further confused relationships.

All this was going on while the new Secretary of State John Kerry was chasing his tail from one capital to another, restarting, he said, “the peace process” between Israel and the Arabs. Caught somewhere in a time warp of at least a decade ago, Kerry refuses to acknowledge that one of the principal threats in the region is Palestinian radicalism, that there is no Arab negotiating partner for Israel, that Prime Minister Benjamin Netanyahu’s shaky coalition would not dare face its electorate in the unlikely event Washington successfully pressured it into permitting another Hamas Gaza Islamicist regime on its eastern border.

If there ever were “a two-state solution,” it disappeared in the flurry of events as the Arab Spring turned from overthrow of dictatorships to a winter of chaos and threatened regional jihadist dominance. The old possibility of a “cantonal” settlement, in which the other state carved out of the League of Nations British Palestine Mandate, Jordan, would “share” the so-called West Bank is forgotten. Jordan, always on the brink with a “Palestinian” majority and now a quarter of a million Syrian refugees, is shakier than ever despite Washington’s assurances of support. Kerry seemed blithely oblivious to these realities in the Arabist fog at Foggy Bottom and under the pervasive influence of the paramount Obama Administration Middle East influence, CIA Director John “Brennan of Arabia”.

It appears to escape Washington’s perception that the whole Israeli-Arab process is now totally eclipsed-even for most of Israel’s traditional Arab enemies-by the growing threat of regional dominance by an Iran armed with weapons of mass destruction. One aspect of this threat is Tehran’s Syrian Mediterranean extension-along with Hezbollah in south Lebanon. That aspect of the mullahs’ plans-“tentacles”-is the main preoccupation of the region at the moment. The multifaceted Syrian civil war-personal dictatorial power, ethnicities. religious conflict, and strategic geography-spills over into each of its neighbors, drawing them into the conflagration.

Washington is mesmerized between alternative scenarios. Having drawn “a red line” against chemical weapons in Syria, President Barack Obama has seen that line breached. Syrian President Bashar al Assad appears to be winning a war of attrition with unprecedented cruelty even for this barbarous part of the world. The “opposition” supported by the U.S., France and the West, is a motley crew of rebels, including elements aligned with al Qaeda and the jihadists. And U.S. promises to aid them is stalled apparently because Washington worries that the coalition’s weaker “secularist” partners could lose out in a post-Assad regime. In all fairness, Sen. John McCain’s calls for action against Syria almost certainly would mean eventual direct American involvement, a threat of another Mideast war involvement the U.S. public abhors.

Tehran, meanwhile, has the continued financial and military support of Assad. This frightens Washington’s European allies with domination of world oil and equally its Arab allies leading characteristically passive Saudi Arabia into action on all fronts to oppose Iran.

Moscow, evermore using Washington as a punching bag to camouflage its own economic and military failings, exploits the eastern Mediterranean problem by supporting Assad at the UN and threatening to send additional weapons to help defend his regime. Meanwhile, Washington’s much touted but only partially implemented sanctions are punishing ordinary Persians, but do not halt or even slow the Mullahs’ development of weapons of mass destruction. If Vladimir Putin goes ahead with renewed threats to sell Tehran sophisticated air defenses, the ultimate possibility of thwarting the Mullahs with a military attack-either by Israel or in concert with the U.S.-starts to evaporate.

An Israeli-U.S.military attempt to halt the delivery might not go as well as Israel’s destruction of Soviet anti-missile shipments in a recent attack on the Syrian ports, apparently from their new submarine-based cruise missiles. And it would force a crisis between Washington and Moscow despite all Washington’s attempts to appease Putin, ignoring insult after insult, including harboring an American traitor, Edward Snowden of National Security Agency secrets leaking fame.

The Obama Administration continues to grasp at any and every straw, hope replacing analysis, that there is a diplomatic solution to the U.S.’s and the West’s impasse with Iran. The latest move to ease restrictions on medical supplies, agricultural products and humanitarian aid entering the heavily sanctioned country is an effort to court the supposed “moderate” President-elect Hasan Rouhani. This action, along with winking at violations of UN and American bilateral sanctions by Washington’s trading partners, ignores the continued total dominance by the all-powerful Supreme Leader Ali Khamenei. He continues to pursue fanatical policies against “the infidels,” not only in the region but worldwide including in Latin America.

The bottom line is that the basic orientation toward the Middle East with which President Barack Obama attempted to initiate new policies five years ago has been blown to smithereens. Outreach to the Arab/Muslim world has failed because it was based on false premises including an idealized version of Islamic history. And there appears to be, for the moment at least, no substitute.

Nowhere is it more evident than in what the President has called his “most trusted ally,” Turkey’s Prime Minister Recep Tayyip Erdogan. Erdogan’s Neo-Ottoman courtship of the Arabs has blown up in his face, with Ankara facing a crisis with virtually every regime coupled with a rapidly deteriorating economy and growing civil disobedience. Worse, as a member of NATO, Erdogan risks dragging the U.S. into his growing confrontation with the Syrian Assad regime through border clashes. (Only a few months ago he courted the Damascus regime as a friend and ally.)

Furthermore, the Syrian Kurdish minority is in revolt against Assad but also at odds with the jihadist elements dominating the Syrian “opposition.” Allied with Turkish Kurds, it threatens to reignite the hundred-year-old Kurdish revolt against Turkish overlordship. Erdogan’s Kurdish “settlement,” which called for the end of a 30-year insurgency and withdrawal of guerrillas to increasingly independent Kurdistan in neighboring northern Iraq, exacerbates that autonomous government’s feud (over oil) with the central Baghdad regime.

When the Obama Administration abruptly abandoned negotiations for a continuing military role in Iraq after the enormous sacrifices made in a decade of war, it insured a revival of the bitter Sunni-Shia struggle now pulling the country apart with ties to the Syrian opposition and Tehran. Chinese profiting from the resurgence of Iraq’s role as a major oil producer caps the total American fiasco.

The promise “to pivot” away from all this in the Mideast to East and South Asia, where an aggressive Chinese regime threatens Japan and U.S. Southeast Asian friends is becoming increasingly difficult. The announcement that U.S. Persian Gulf forces, arrayed against Iran, will be reduced from two to one aircraft battle group is hardly an encouraging sign for the region that still depends on America for whatever stability it has. The move is announced as a part of the reductions enforced by “sequestration,” the mandatory cutbacks on military expenditures. But to those in the region, it is bound to look like one more piece of evidence of a quit-and-run strategy in the wake of growing difficulties and the announced deadlines for Afghanistan withdrawal with its unforeseen consequences for a troubled Pakistan.

For the first time in the post-World War II era, U.S. policy may be contributing to the always chaotic Mideast scene rather than lending it any stability.

*A version of this column is scheduled for publication Monday, July 29, 2013, at worldtribune.com