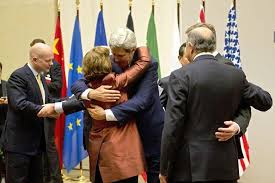 Mirabile Dictu! Even Fareed Zakaria says the Joint Plan of Action, signed between Iran + P5+1 countries in Geneva, Switzerland, is a “train wreck.” Why? Because Iran has no intentions to freeze any parts of Iran’s nuclear program. “They talked about dismantling the heavy water reactor at Arak. But he [Rouhani] made clear, categorically, specifically and unequivocally, none of that is going to happen.”

Too bad neither he nor many others wonder about the root cause for the different understandings of what was agreed to on November 24 in Geneva. Or, why when Iran is allowed to decide, a posteriori, which parts of the agreement it will adhere to, there is no reaction from Washington apart from “oh, they’re only speaking for domestic political consumption.”  Delay easing sanctions as a response? Not a chance. Shhh! We’re still negotiating!

The futile attempts to end Syria’s civil war and the U.S. “mission” to forge an Israeli-Palestinian peace accord are also train wrecks. “Analyzing” U.S. Middle East policy has become a past-time, mostly attributing sophistication to Washington’s approach.  There is, however, no agreement on what our approach is other than banalities like ‘trying diplomacy first’, ‘avoiding war’, ‘giving Iran a chance to join the community of nations’, etc.  However, there is nothing sophisticated in a lack of strategic plan. The Administration is just busy “negotiating” -“engaging.”

Secretary of State John Kerry, in a typical manner, admitted as much on Friday, January 23, at the World Economic Forum in Davos, Switzerland. There, he told business leaders that the notion that the U.S. is disengaging from the Middle East is not only wrong but, in fact, flies in the face the fact that we are engaging more than ever.  As reported widely in the media, Kerry was quoted as using the term “doubling down” to describe U.S. engagement in pursuing a negotiated end to the Iranian nuclear threat, an end to the Syrian civil war, and an Israeli-Palestinian peace agreement. That’s what his constant presence in the region is all about – engagement.  That there is nothing to show for it, that nothing good is happening, apparently does not seem to bother him or the administration.

‘International relations’ is more like marriage than engagement.  We’re all stuck with one another and we are what we are.  If we don’t like one another, the only choices are divorce (war), or passive aggressive “toughing it out.”  “Engagement,” between or among states, is no more a guarantee of blissful coexistence than seeing a marriage counselor is for an unhappy couple.

Among states, negotiation is generally a stall to avoid doing something, to do nothing, or to cover-up while the parties continue their assault on one another.  To adapt an old Ambrose Bierce line from The Devil’s Dictionary, “Engagement is a period of cheating between two periods of fighting.”

Multilateral engagement is even worse than the bilateral kind.  It’s like proposing to multiple would-be “partners” without the slightest intention of marrying any of them.  Each couple gets its picture in the newspaper shaking hands, kissing, etc., after which no one will remember to look to see if the wedding actually took place.  Even polygamy and polyandry are more conducive to peace among the assorted participants than is multilateral engagement.

We allow our leaders to get away with engagement-aka diplomacy-because we don’t like conflict. Our leaders wish to stay our leaders, so they sell us on the notion that engagement and diplomacy can prevent conflict. Besides, “no one can fight while they’re talking.” (Want to bet?)  Winston Churchill’s nostrum that “jaw-jaw is better than war-war” is frequently (mis)used to this end.

“Engaging” actual or potential enemies diplomatically has been a central tenet of the current administration’s policies. Hillary Clinton made it the focal point of her “maiden” major policy address to the Council on Foreign Relations in 2009. She also made it clear that the administration demanded to be judged on its commitment to “process,” i.e., “engagement” efforts, rather than results.  How could she make that demand?  Easy: If righteous process doesn’t achieve positive results, it’s not the administration’s fault, but its predecessors (all of them, not just George W. Bush), who left the Obama with a bad hand to play.

So here we are in the midst of the Iranian train wreck, the Syrian train wreck, and the train wreck of U.S.-led Israeli-Palestinian negotiations. Doubled-down engagement.  It’s time to call the administration’s bluff on foreign policy engagements before the U.S. loses whatever leverage it retains, after squandering its short-lived accomplishments in Iraq and Afghanistan; its “all options still on the table” approach to the Iranian nuclear program; developing a an acute case of color blindness to deny the “red-line” that was repeatedly crossed in Syria; and U.S. modification of genuine backing of Israel.

Does real disengagement lead to feckless diplomatic engagement or vice versa? It hardly matters when it comes down to the disappointing outcomes of this administration’s “engagements.”