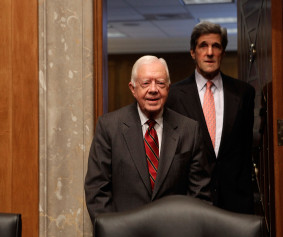 The US initiative on Gaza has only alienated its friends in the region.

After direct talks between Kerry and Iranian foreign minister Zarif, and without consulting with the other five negotiating powers, the US agreed to a four-month extension of the talks deadline set last November. This gives Iran four more months to continue to work on achieving the ability to produce nuclear weapons and for the sanctions regime to deteriorate further. Of course, it also puts off the deadline until after the November Congressional elections so that the Administration won’t have to admit failure before the voters go to the polls.

Now Secretary Kerry, after failure in Cairo and Jerusalem, met in Paris with the foreign ministers of Turkey and Qatar, Hamas’s strongest supporters, and “negotiated” a cease-fire proposal that incorporated all of Hamas’s demands and none of Israel or Egypt’s, following which Obama called Netanyahu and “demanded” that Israel agree to a cease-fire “without conditions”.

This proposal was rejected by everyone, including the Palestinian Authority (PA), which also objected to the fact that it was not invited to attend the Paris meeting.

Kerry and Obama have achieved the miraculous; uniting all the factions in the Israeli government against US policy and managing to outrage not only its principal ally in the Levant but also the most important Muslim country in the region, Egypt.

Conspiracy theorists may now claim that Kerry and Obama knew what they were doing, because now Israel will be able to continue to degrade Hamas’ and Islamic Jihad’s military capacity without let or hindrance by third parties.

Which brings up a vital question: what happens next? There are many possibilities. One is that Hamas survives in a greatly weakened state, broken and bankrupt, but still misgoverning the Gaza Strip. Alternatively, Hamas in Gaza is replaced by the Palestinian Authority/Fatah. Or an even more radical group takes over, such as Islamic Jihad or even the Islamic State.

Although much is made of it by commentators and others, recently including the head of the US Defense Intelligence Agency (DIA), alternative three is not going to happen because it would not be permitted by Egypt or Israel. Alternative one is possible and is favored by many, but nothing guarantees that Hamas will not recover over time, with the help of allies such as Iran, Turkey and Qatar, and once again begin to threaten Israel.

Which leaves alternative two, a PA/Fatah takeover, which is obviously what Abbas has in mind. It is the least bad alternative, and could even turn into a quite acceptable alternative in the very possible event of a change in the PA leadership.

Certainly the people of Gaza would welcome it. All indications are that they are thoroughly disgusted with Hamas’ “leadership”.

If this happens, or something similar, it will be not because of any support or collaboration by the United States with Israel, but precisely because the Israeli government has found the courage to do what needs to be done even contrary to the expressed wishes of the US.

* Norman A. Bailey, Ph.D., is Adjunct Professor of Economic Statecraft at The Institute of World Politics, Washington, DC, and teaches at the Center for National Security Studies and Geostrategy, University of Haifa.  This column was originally published on Globes on July 29, 2014.