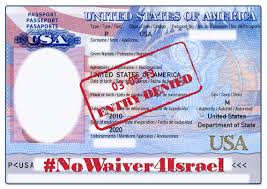 Someone in the United States government is afraid of Israelis. That has to be the best explanation why Israelis’ ongoing attempts to enter the Visa Waiver Program (VWP) are encountering stubborn resistance, despite the fact that 38 countries, some not as closely allied with the U.S., are part of the program.

The stated reason, according to a report in rollcall.com, is that dropping visa requirements “would increase the risk of Israeli espionage.” Yet this explanation does not bear scrutiny. Israeli tourists were never caught spying here.

The two members of the U.S. defense establishment, Jonathan Pollard and Ben-Ami Kadish that have been convicted of spying for Israel, were American born citizens. Not Israeli tourists.

The VWP include 38 countries, among which the United Kingdom is a a close ally, as well as the likes of France, South Korea, Brunei, Taiwan and several former Soviet republics.

France, for example, is described as having a “penchant for stealing American defense technology, bugging American business executives and generally annoying U.S. counterintelligence officials,” and as a “proficient, notorious and unrepentant economic spy.” A diplomatic cable published by WikiLeaks quotes a German technology executive saying “France is the evil empire [in] stealing technology.” This is a continuing process going back at least a quarter-century — a 1989 document lists U.S. aerospace companies reportedly targeted by French intelligence, and the CIA claims first-class cabins on Air France were bugged from at least 1980 until 1995. Yet the U.S. curiously overlooks “the risk of French espionage.”

The growing and increasingly radicalized Muslim populations in countries such as France, Germany, and the U.K. pose a growing security risk that should limit free entry to the U.S. For example, Zacharias Moussaoui flew undetected to the U.S. under the visa waver agreement with France, and Richard Reid, a U.K. citizen, was caught on American Airlines Flight 63 from Paris to Miami. Both plotted mass-casualty terror attacks. Had they been required to apply, both would have been denied a visa , just by a cursory review of their history.

Other countries pose similar threats. The inclusion of Brunei on the waver list is simply incredible — a conservative Muslim dictatorship that plans to introduce Sharia law stipulating death by stoning as punishment for adultery, defamation of the Prophet Mohammed or the Koran, homosexuality, robbery, and murder. Anyone from this country, including the very clerics who administer these punishments, can enter the U.S. for 90 days with perfunctory scrutiny. But tourists from Israel, one of the most progressive countries for religious freedom, women, minorities, and gays, are suspect.

Latvia, Lithuania, and Estonia all contain substantial and somewhat restive Russian minorities. It is not inconceivable that the Russian government could exploit its Baltic compatriots to spy on the U.S. The inclusion of these countries in the VWP is tantamount to allowing Russian intelligence free passage into the U.S. Similar words could be written about North Korea exploiting South Korea’s status, or China exploiting Taiwan’s — or either country conducting industrial espionage in the U.S.

The U.S. Embassy in Israel website includes a special category for tourist visa applicants “who work or study scientific and technical fields, ” with the following requirements for

1. Work Experience: Detailed description of current and past work;
2. Specialized Skills: Possible examples include languages, computer training, research expertise, military service, work in defense industry, or other specialized training;
3. Educational/Research Background: Name of institution(s), dates of attendance, field(s) of study, degree(s) obtained, and research topics;
4. Publication List (as applicable): Titles, topics, dates of publication, and brief abstracts or summaries;
5. Travel: Countries and years visited in the past 10 years;
6. Trip Itinerary: Date(s), location, and purpose of the visit and any relevant addresses, websites, and contact information (as applicable) of companies, conferences, and/or institutions.

This application form looks more like a security clearance questionnaire than a tourist visa application.

The special requirements for Israelis with scientific and technical background limits the number of Israelis with such a background from attending conferences in the U.S. and developing stronger ties with American colleagues, to both countries’ detriment. The actual rejection rate for visa applications by Israelis increased substantially in the past year — from 5.4% in 2012 to 9.7% in 2013, an 80% rise.

While this goes on, the legislation to include Israel in the Visa Waiver program is being held up in Congress. “Members of Congress were accusing the State Department of punitively denying Israeli tourist visas and keeping Israel out of the Visa Waiver Program.”

While U.S. citizens do not need a visa to enter Israel, the bill to allow Israel into the VWP includes a reciprocity exemption, by which the Jewish state would not have to automatically allow U.S. citizens to enter.

Occasionally Arab- and Palestinian-Americans are subject to additional scrutiny when entering directly from the United States, or from an Arab country. This is a necessary measure for a country surrounded by mortal enemies, as several terrorists have entered Israel on real or forged foreign passports. Such scrutiny is a risk-based assessment that takes place at the border and only excludes those evaluated as a security threat. Not surprisingly, the State Department claims that this extra screening is unnecessary, and therefore it objects allowing Israel into the VWP. At the same time, the U.S. also bars suspect tourists from entering the U.S., even from a Visa Waiver country.

Incredibly, Pakistanis are not required to disclose their background when applying for a tourist visa to the U.S.