U.S. Arming Jihadist – Again & About That War on Terror 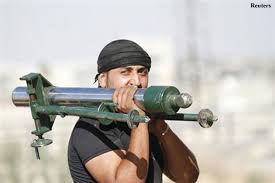 Reported division between the United States President and his Secretary of State regarding American intervention on behalf of Syria’s Sunni opposition, will afford Obama deniability for the predictable horrific results.

And the gullible media is buying into the story. Incredibly, the Financial Times attributed the President’s widely reported hesitation of supplying advanced weapons to Assad’s opposition to Obama’s “Hippocratic instinct” (do no harm). Does it mean that John Kerry on his own committed the U.S. into giving “urgent military support…each country in its own way,” to Syrian opposition groups? Hardly.

Qatar’s PM Sheikh Hamad bin Jassim bin Jaber al-Thani, explained today that the Friends of Syria group decision to “provide all necessary material and equipment to the opposition on the ground… may be the only means of achieving peace.“

He didn’t specify which “opposition on the ground” group gets the weapons. However, in an earlier statement he noted, “you can’t guarantee that one weapon or another may not fall, in that kind of a situation, into hands that you don’t want it in.”

For Qatar, as seen all along in Gaza and recently in Libya, the right hands are those of Islamic militants, the likes of those who killed the four Americans in Benghazi last year.

The Federal Research Division of the Library of Congress released a report on August 2012, documents how “al-Qaeda adherents in Libya used the 2011 Revolution to establish well-armed, well-trained, and combat-experienced militias.”

The Administration assistance to the Qatar-allied Libyan opposition resulted in a war-torn country, daily violent clashes, torture, arbitrary arrests and Islamic rule.  Qatar-assisted groups in Syria have already added fuel to the Syrian fire. Supplying more sophisticated arms will only contribute to the chaos and lengthen bloody fights, no matter which Islamist side – Sunni or Shia – wins in Syria. Moreover, American made weaponry will be used to further the jihadist war, destabilize the region and even attack Americans. But none of this seems to concern the Administration. But then, it doesn’t seem disturbed by the abysmal outcomes of U.S. intervention in Iraq and Afghanistan.

Replacing military dictatorships in Iraq, Libya and Egypt with Islamist tyrannies contradicts the strive to advance “four essential human freedoms”  that Franklin Delano Roosevelt sought to achieve in the aftermath of the Second World War.

About That War on Terror

Now that President Barack Obama has decided the United States must provide direct military support to the Syrian opposition and Secretary of State John Kerry is meeting with “Friends of Syria” who are reportedly already providing heavy weapons including anti-tank and anti-aircraft missiles, some American observers warn that the main players in that opposition are in fact jihadists. If helping al -Qaeda take over Syria sounds a little strange, it’s worth pointing out that it is consistent with U.S. policy in Libya.

Not, of course, that the Administration puts it that way. Obama, speaking May 23, 2013, at the National Defense University, referred several times to the situation in Libya. In his analysis, extremists gained a foothold there due to “unrest in the Arab World.” The only way to fix this problem is to combat poverty and sectarian hatred, while “patiently supporting transitions to democracy” there and elsewhere in North Africa.

Unfortunately, Obama’s description of what’s going on in Libya and how it got that way bears little relation to reality. As John Rosenthal details in The Jihadist Plot (New York: Encounter, 2013, 96 pages, available either in digital form on paperback), Islamic jihad in Libya got a huge boost from none other than the North Atlantic Treaty Organization (NATO). As Rosenthal puts it: “Once upon a time, there was a ‘war on terror.’ The term was highly contested…But for all its problems, at least the term had the advantage of making clear that the US and its allies abhorred the tactic in question.

They do not anymore. A remarkable development took place in the midst of the 2011 conflict in Libya: the United States and its allies changed sides in the war on terror.”

Rosenthal’s analysis draws on open sources, including court records from terrorist trials here and in Europe as well as a wealth of online information, including videos and jihadist websites. He painstakingly traces the history of the Libya Islamic Fighting Group (LIFG) in which many rebel leaders were prominent. For years LIFG cooperated closely with al Qaeda, officially incorporating into it in 2007. In addition to fighting in Pakistan and Iraq, LIFG members have been linked by European law enforcement and intelligence authorities, as well as European courts, to the terror attacks in Casablanca (2003), Madrid (2004) and London (2005).

Among those individuals are Abdul-Hakim al-Hasadi, the most prominent leader on the eastern front that included Benghazi; Abdul-Hakim Belhadj, LIFG supreme military commander and subsequent military governor in Tripoli; Abu al-Munthir al-Saadi, the LIFG’s chief religious authority and strategist, formerly linked to various terror plots in the UK; and Wisam bin Hamid, the field commander who directed the siege of Sirte and on the night of the September 11, 2012, was in charge of the Libya Shield Brigade, an al-Qaeda-linked group purportedly protecting the U.S. installation in Benghazi.

The mainstream media and liberal commentators have consistently defended Obama’s policy on Libya, while prominent conservative columnists like Charles Krauthammer and Peggy Noonan have only argued that President Obama sought to conceal the truth about the Benghazi attack for fear that it might puncture his narrative of foreign policy success in defeating al-Qaeda. But

Rosenthal’s book raises far more serious questions, by demonstrating that the jihadist ties of rebel leaders were wellknown to U.S. and European governments. U.S. authorities, for example, had detained a number of these leaders, either in Afghanistan or at Guantanamo. And British courts had ruled decisively that the methods used by the LIFG constituted terrorism.

So why did the U.S. government help al-Qaeda-linked terrorists overthrow Gaddafi, those same individuals and jihadist militias who recently tried to force the Libyan government to resign? And why is the Administration, albeit with more hesitation, probably about to pursue a similar policy in Syria?

One possibility (that is consistent with but lies outside the scope of Rosenthal’s research) may be that the stream of Islamist visitors to the White House convinced Administration officials, from the President on down, that the best outcome would be Muslim Brotherhood dominance in the Middle East and North Africa – and that the Muslim Brotherhood is somehow quite separate from Islamic terrorism.

That could explain, for example, the ability of one Islamist, Louay Safi, to obtain a permit to finance Syrian opposition groups. Safi visited the White House twice in 2011, then later surfaced in Syria as a leader in the Brotherhood-dominated opposition. In July 2012, the Office of Foreign Asset Controls granted the Syrian Support Group, with which he is associated an extraordinary license to raise money for Syrian rebel groups, including the Islamist dominated Free Syrian Army.

The idea that the Muslim Brotherhood has no connection to terrorism of course flies in the face of reality in Egypt, Libya, Syria, Gaza and elsewhere. In Egypt, for example, the earliest demand of the Muslim Brotherhood president Mohamed Morsi was to release blind sheikh Omar Abdul Rahman, in prison in the U.S. for the 1993 World Trade bombing. More recently, Adel Mohamed al-Khayat who masterminded the 1997 Luxor massacre has just been appointed governor of that city. And the jihadist group that claimed responsibility for the attack in Benghazi, is the “Brigades of the Imprisoned Sheikh Omar Abdul Rahman.” How much clearer does the connection have to be?

There are no “good guys” to choose from in Syria. Many political observers understand that the Syrian opposition is no better than Assad. Alas, as in Libya, the Obama administration is once again arming jihadists.