Turkey, Erdogan, and the Muslim Brotherhood in Iraq 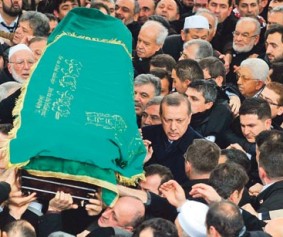 Two lawmakers from Turkey’s opposition Republican People¹s Party had the temerity to accuse the government of both “protecting and cooperating with jihadist militants of the Islamic State in Iraq and the Levant (ISIL) and the al-Nusra Front.” The Turkish government was quick to deny the claim.

The appearance of a wounded jihadist commander being treated in a Turkish hospital is a subtle reminder that Turkey is governed by a leading member of the Ikhwan al-Muslimun — the Muslim Brotherhood. It is also a reminder that when one scratches a Muslim Brother, a jihadist bleeds. While it is true that some Brothers, like Ikhwan ideologues Yusuf al-Qaradawi and Hasan al-Turabi, will take up the pen rather than take up arms in the movement to revive the Islamic Caliphate, both Ikhwan intellectual and soldier are equally determined. And so too are the Ikhwan’s politicians, people like Erdogan of Turkey, Ghannouchi of Tunisia and Morsi of Egypt, who are determined to re-create Islam’s Caliphate.

Members of the Ikhwan, from its founder Hasan al-Banna to Turkey’s Erdogan, have all been aware that terrorism can be a useful adjunct in the Islamist revolution. It has been used more frequently in that epoch of Arab history that dates from the Muslim world’s rejection of Arab nationalism. Following the death of Nasser (Arab nationalism’s primary sponsor), in the nineteen-seventies, a plethora of jihadist branches sprang from the Ikhwan tree. Uniformly, the organizations rejected the Ikhwan’s evolutionary philosophy that had been forced on it by Nasser and then by Egypt’s powerful military caste.

The Islamist movement came to a boil with the war in Afghanistan. It festered with the American presence in the first war in Iraq and gained strength with the war in the Balkans. In that war, Muslim Brothers Sudan’s Hassan al-Turabi and Bosnia’s Izetbegovic, together with Recep Tayyip Erdogan and his mentor Islamist politician Necmettin Erbakan (1926-2011) had played a major role. In the early 1990s, Erbakan and Erdogan served as money launderers and arms purchasers in the Islamist-backed insurgency in Bosnia, Kosovo, and Albania. Their activity can be seen as a starting point in what would be a continuing Islamist effort to infiltrate the Turkish polity and dominate its future. Egyptian Muslim Brother Yusuf al-Qaradawi, from his exile in Qatar, Tunisia’s Rashid Ghannouchi, from his exile in London, and the members of the Egyptian Ikhwan at home and in exile, also played part in the Balkan war, though less directly.

Erdogan eulogy of Erbakan, his political (and Ikhwan) mentor, showed he remained in the thrall of such predecessors as the internationalist al-Afghani, the Ikhwan al-Muslimun founder Hassan al-Banna, the Brotherhood’s terrorist ideologue Sayid Qutb and the Afghan-Arab and Palestinian Ikhwan Abdalla Azzam. Thus, the appearance of an Islamist mujahideen in a Turkish hospital surprised few Turks who had been following developments in the wake of the so-called Arab Spring.

The genesis of the Arab Spring is found in Tunisia where the previously outlawed Ennahda party — an Ikhwan al-Muslimun institution — came to power following the overthrow of an entrenched secular (and sclerotic) government. Immediately, the jailed jihadists were released. And the former Arab-Afghan mujahideen emerged from hiding. Ironically, the capture of Tunisia’s polity should have been easy were it not for the fact that neither Ghannouchi nor his Ennahda politicians and gunmen showed any leadership.

In Libya, its Muslim Brotherhood, founded in the mid-1950s, was already poised to attack its dictator Muammar Qaddafi. They had been badly bloodied in the late nineteen-nineties in a failed effort to depose the leader. Thousands were jailed or forced into exile. However, the events in Tunisia were a call to return home, where the Ikhwan had secured an important foothold in Cyrenaica. In 2006 Qaddafi for the first time since seizing power had sought a reconciliation with the Ikhwan (some said at U.S. insistance). And when the effort was underway to oust Qaddafi, Yusuf Qaradawi issued a fatwa that made it incumbent on all Libyan soldiers to
assassinate Qaddafi if they had the opportunity to do so. It is claimed
that today the Ikhwan is behind (and actually supports) the chaos that hinders the creation of a national government.

In Egypt the street protests of January 2011 eventually led to the downfall of President Hosni Mubarak. But not the Egyptian military, the Ikhwan’s bete noire! Still, under Morsi the Ikhwan moved swiftly to take power.

Once that was achieved they emptied the Egyptian jails of the hundreds of fellow jihadists, including convicts from Ayman al-Zawahiri’s Egypt Islamic Jihad and members of the Jamaat al-Islamiya who had rejected any peace agreement with the Egyptian government. They were the toughest of the tough. Intransigent Islamists took over operations in the Sinai in the expectation of bringing the jihad to Israel itself.

In Syria, the Arab Spring that sought to depose the Assad family and its Alawite allies may have started as a spontaneous uprising. Nonetheless, the movement was soon captured by the Islamist mujahideen, and they have been supported by powerful Ikhwan forces in Kuwait (whose banking system is controlled by Muslim Brothers) and Qatar (whose al-Thani family has allowed the Ikhwan ideologue Yusuf Qaradawi unfettered access to radio and television). The Syrian Ikhwan, led by Riad al-Shaqfa, keeps a low profile but it can count on Erdogan’s friendship. The Turkish leader allowed the Brother to hold a press conference in Istanbul where Shaqfa blasted Bashar al-Assad and the whole Assad family. The result was a heightening of tension between Syria and Turkey that has not been lessened to this day.

And in what is an ironic twist of fate, Erdogan, the man who played an essential part in running guns to the Muslims of Bosnia-Herzegovina during the Balkan wars, became an essential element in the movement of arms to the rebels in Syria. For the second time, the United States played into his hands, assisting in the shipment of arms from Benghazi to Syrian rebels through Turkish ports. Almost certainly, the arms would reach those rebels that the Ikhwan’s Erdogan found most favorable, even if they were the terrorist Islamist factions the United States opposed.

From the activity of U.S. embassies in Cairo, Tunis, Khartoum, Doha and Ankara, it seems that American policy makers are convinced that it is possible to do business with the Ikhwan al-Muslimun and Brothers like Erdogan. In country after country, they have had to learn the hard way that underneath any Brother’s outward disguise is an Islamist. Given recent events, it is a good idea to watch what the Ikhwan are up to in Baghdad.

In Iraq, an Ikhwan branch was founded in 1948 in the form of the Society for the Salvation of Palestine (Jamiyat Inqadh Filastin). Its membership was derived from Iraqis influenced by Brotherhood in Egypt. With the crackdown of 1958 and a coup led by Abd al-Karim Kassem, Ikhwan activity was quashed for the next half century. Nevertheless, the Ikhwan founded in 1960 the Iraqi Islamic Party (IIP, or Hizb al-Islami al-Airaqi) after which it argued that political action was “a religious and national duty”. Its principles demanded individual rights for all citizens, national elections, a legal system based on shari’a, land reform, a women’s right to work, establishment of trade unions, and the protection of natural resources.

Following first Gulf War the Iraqi Islamic Party revived and began publication of its periodical, Dar al-Salam. The Iraqi Muslim Brotherhood was considered Iraq’s largest Sunni movement. Domestically, it emphasized education and Islamic outreach, and it rejected outright sectarianism and Western thought, including Marxism and nationalism. When Saddam Hussein embraced Islam following the end of first Gulf War, he opened new mosques and built the Saddam University that taught Sunni theology. He put “there is no god but God” on the Iraqi flag. And in months before the U.S. invasion in 2003 Saddam eased off the Ikhwan to win over Sunni Arabs, his core constituency.

In December 2004, the Iraqi Islamic Party reemerged, fielding 275 candidates for the 275 seat National Assembly charged with drafting a constitution. The Shiite element in Iraqi politics would eventually emerge much more powerful thanks to its population advantage. Still, the Ikhwan remains a powerful political element within the Sunni population. Should Iraq split into thirds (Kurdistan, a Shia division, and a Sunni division), the Iraqi Muslim Brotherhood would likely take power.

One wonders if the U.S. Embassy in Baghdad has planned for that eventuality?