Tunnel Wars Against the U.S. and Israel 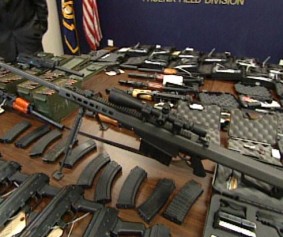 Hundreds of thousands of illegal aliens are guesstimated to sneak into the United States through the Southern Border on foot or on wheels. Much less is known about the number of illegals who make their way through undiscovered tunnels dug underneath the border.

Unlike the limited baggage those crossing overland from Mexico can carry, the moles can smuggle through the tunnels not only tons of different illegal drugs, but also weapons, including WMD, conventional and unconventional explosives, GPRs, and shoulder-fired missiles, similar to the rockets Hamas is firing on Israel from the Gaza Strip.

Iranian and North Korean know-how assisted the construction of Hamas tunnels deep into Israel. Hezbollah and al Qaeda-affiliated groups have been active throughout Latin America in general and in Mexico in particular, and lately North Korean activity in the region has been noticed too. All these groups are known to cooperate with Mexico’s infamous drug cartels and transnational criminal groups.

Since all Islamists consider the U.S. as the Big Enchilada (“Big Satan”) that has to be conquered and that a vast tunnel network already exist under the southern border, how many members of Hezbolla and al Qaeda affiliates have already come through? What kind of conventional and unconventional weapons have they smuggled in?  The discovery of well disguised tunnels is a difficult task even when such threat is acknowledged. David Masters, who oversees such DHS efforts stated earlier this year that “We can’t go check if every rock or boulder is a tunnel.”

Moreover, the Administration opposes any measure that will allow to identify and track illegal aliens, diminishing the probability of obtaining intelligence that would help destroy the tunnels and prevent drugs, weapons and terrorists who carry them from entering the country. Keep this in mind to better understand Obama’s growing pressure on Israel to stop the destruction of Hamas rockets filled tunnels that threaten the lives of all Israelis, Jews and Arabs alike. Still, it is disturbing that the president of what used to be the “leader of the free world” is actively engaged with the most radical leaders who are set on genocide and suppression of all freedoms.