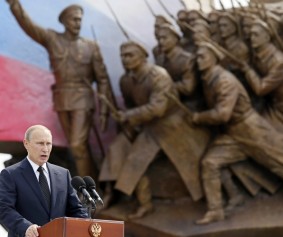 Putin Isn’t Trying to Win the Cold War — He’s Refighting the Battles of World War I.

World War I was not only one of the longest and bloodiest conflicts in history, but arguably the most seminal. The war was a catalyst for the Great Depression, the rise of the brutal ideologies of Nazism, Communism, and Fascism, numerous regional wars over scraps of bygone empires, and, of course, World War II. How Europe’s leaders stumbled into the disastrous war remains one of the great unresolved puzzles in modern history. Mountains of books and articles have tried to explain how an assassin’s bullet fired in Sarajevo ignited the great catastrophe of the 20th century.

The answers never seem satisfactory. Crude explanations designed to establish German guilt, popular until the 1990s, have gradually been replaced with a more nuanced picture, where the other belligerents, including Britain and France, share the burden of responsibility more equally for launching a war that killed more than 10 million people. But the focus on what happened in London, Paris, and Berlin has masked the importance of the events in the East. Russia, too, shares responsibility for the catastrophe in Europe. As the world remembers the start of the war 100 years ago this week, understanding Russia’s strategic calculus at the time can help decode Moscow’s recent behavior in Ukraine.

Russia’s role in the prewar period is commonly believed to have been in providing imperial backbone to her little Slavic sister, Serbia, in the wake of a diplomatic onslaught by Vienna and Berlin following the assassination of Archduke Franz Ferdinand. But as Russia’s archives gradually open to scholars after a century of censorship, it has become clear that protecting Serbia was not Russia’s main objective. There was much more at stake for Russia than a small ally in the Balkans.

What drove Russia’s prewar actions was the desire to control the straits of the Bosphorus and Dardanelles — or at least to ensure they did not fall in the hands of adversaries like Germany. Access to year-round, ice-free sea lanes has always been a strategic priority for Moscow. For centuries, the Turkish Straits were essentially the Russian economy’s umbilical cord. They were Russia’s gateway to the Mediterranean and from there to the entire global market. But in the prewar period, the area around the straits became increasingly unstable.

During the Italo-Turkish War of 1911 to 1912, the Ottomans rattled Russia by closing the straits. Russia’s export revenues, primarily from grains, dropped by one third. Next came the two Balkan Wars of 1912 to 1913, throughout which Russia was on high alert for additional closures. In the end no disruption occurred, but Russia’s trade balance plummeted so badly due to panic that its foreign exchange reserves were almost exhausted. As it became clear that the Ottoman Empire was nearing collapse, preventing one of the other major European powers from inheriting the straits became Russia’s foremost strategic objective. As Russia’s Foreign Minister Sergey Sazonov wrote to Tsar Nicholas II in December 1913:

“The state which possesses the Straits will hold in its hands not only the key to the Black Sea and Mediterranean but also that of penetration into Asia Minor and the sure means of hegemony in the Balkans.”

“The state which possesses the Straits will hold in its hands not only the key to the Black Sea and Mediterranean but also that of penetration into Asia Minor and the sure means of hegemony in the Balkans.”

Russia’s concern was aggravated by Germany’s prewar maneuvers. Prior to the war, German officials worked hard to befriend the Young Turks who ruled the Ottoman Empire. The German emperor advanced a railway project to connect Berlin with Baghdad via Constantinople, and German intelligence spread rumors throughout the Muslim world that the Kaiser, who became known as Hajj Wilhelm, had been secretly converted to Islam and made a secret pilgrimage to Mecca.

On the eve of the war in 1914, Berlin sent two battleships to Constantinople in an effort to solidify the German-Ottoman alliance. Russia’s concern over Germany’s courtship of the Ottomans intensified further in the autumn of 1913 when it became known that Berlin had sent Gen. Otto Liman von Sanders to command and modernize the Turkish First Army Corps, the division responsible for guarding Constantinople and the Turkish Straits. For the Russians, a German-Ottoman alliance meant that were they to ever attempt to take over the straits they would come up against a modernized opponent, which would be hard to beat.

When Europe’s armies mobilized after the assassination in Sarajevo, Russia found itself in a dilemma. They could let Austria-Hungary defeat Serbia and thereby give Vienna a launching pad toward the Aegean Sea and, from there, the Turkish Straits. Or, Russia could mobilize its army of 5 million soldiers to attack Germany, which it hoped would spur Berlin to push forward on the western front, where the Kaiser thought he’d have a better chance of taking out the French than digging in against the Russians.

Russia chose the latter. The course of the war — and world — changed forever.

Of course, this plan did not work out as the Russians had hoped. Within a month of entering the war, Russia’s army suffered serious setbacks in the eastern front, the most painful of which was the annihilation of its Second Army by the Germans in the Battle of Tannenberg in late August. Beaten and weakened, Russia was no longer in a position to take over the straits. The pursuit of Russia’s primary objective had been thwarted.

In 1915, as the war entered its second year, Russia could only sit on the sidelines watching its allies, Britain and France, trying and failing to take over the straits in the Gallipoli campaign. Then the Communist Revolution started and Russia withdrew from the war. After its end, the Treaty of Sevres designated the straits an international territory under the control of the League of Nations. Russia’s dream of controlling the passage was shelved for good.

Fast-forward 100 years. Russia’s position in the Black Sea was again challenged, at least in the eyes of Vladimir Putin, as the 2014 Ukrainian revolution ousted a Kremlin ally from power and gave rise to a pro-Western government. At risk this time was not the Turkish Straits but another important warm water outlet, Crimea’s Sevastopol.

Sevastopol, home of the Russian Black Sea Fleet, belonged to Russia since the 18th century.

Sevastopol, home of the Russian Black Sea Fleet, belonged to Russia since the 18th century. The Soviets had transferred the Crimean Peninsula to Ukraine in 1954, but the naval base at Sevastopol remained under Russian control. The change of leadership in Kiev, however, raised fears in Moscow akin to those of tsarist Russia on the eve of World War I. For Putin, Sevastopol falling into unfriendly hands — or worse, NATO’s — presented as big a challenge as the possibility of the Turkish Straits coming under German control a century earlier.

The world has changed dramatically since 1914. But some traits of the international system, particularly those having to do with geography, are eternal. Russia’s craving for year-round access to maritime trade is one of them.

Because of Russia’s geographical disadvantage, its necessity for access to warm waters, the Black Sea matters much more to Moscow than the Caribbean Sea to Washington or the South China Sea to Beijing. The United States had the Monroe Doctrine to protect its hemispheric waters, while today China defines its sea as “blue national soil.” Russia has never articulated its Black Sea doctrine, but make no mistake: it has one. Any attempt — real or perceived — to challenge Russia’s maritime interests in the Black Sea will face a stark response.

This absence of a stated Russian doctrine may explain the West’s interpretation of the takeover of Crimea as the beginning of an attempt to restore a bygone empire. But as European and American leaders contemplate what to do next with Russia, it is worth remembering that Putin’s takeover of Crimea has much more in common with Tsar Nicholas’s concerns in the Black Sea in 1914 than Leonid Brezhnev’s in Czechoslovakia in 1968. Putin’s takeover was an act in defense of Russia’s national interest, fully consistent with the country’s geopolitical DNA, rather than one of sheer, blind aggression.

The European great power system of a century ago was characterized by opaque international politics and secret entanglements. Since then, foreign policy has come much more into the open; only Russia has remained as enigmatic as it once was. As policymakers try to make sense of the Kremlin’s latest moves, rereading some World War I history could be essential to ensure that, this time around, Moscow’s misunderstood geopolitical ambitions do not lead the world to sleepwalk into war.

* This article was originally published in Foreign Policy on August 5.

** Gal Luft is a member of the American Center for Democracy’s Board of Advisors.