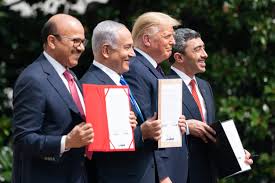 Bahrain’s joining the UAE and the encouraging signals from Saudi Arabia, Morocco and Sudan do not change Israel’s regional standing fundamentally, but they do point to an interesting pattern that proves the dramatic influence of the American policy in the region.

It has become clear, once again, how much damage can be done by a simplistic policy, influenced by warped images of regional balances of power, and what great benefits the US and its allies can reap instead by coldly analyzing this balance. When Kissinger and Nixon introduced a revolutionary change in the US standing, based on such an analysis, no one who knew their global achievements was surprised. When Trump goes the right way, it’s difficult to attribute this to sharp analytical skills. However, it has become clear that when it comes to the Middle East, he has something no less important: healthy strategic instincts. Beyond the regional issue, there’s an interesting lesson here to be learned. Obama, the cold and sophisticated one, almost never missed making a mistake in his understanding and policy in the region; Trump, the erratic and emotional, made only a few mistakes (like with Erdogan) and brought many benefits.

The US and its allies have suffered greatly from presidents who didn’t understand the region. The worst damage was caused in 1956 by Eisenhower, who catapulted to the messianic leadership of Nasser, critically hurt the standing of his senior NATO allies, and dramatically strengthened the standing of the USSR in the region. He did so due to a hallucinatory belief that Egypt and the non-aligned will see the Americans as allies against the British-French “neo-colonialism” in the Suez. The inevitable outcome of strengthening Nasser’s radicalism and the Soviet patron was the collapse of the important pro-western regime in Iraq and the threat to Jordan and Lebanon, who was just barely saved thanks to the help of British and American forces. The damage caused by Kennedy was less dramatic, but he also tried to reconcile the radicalism of Nasser, instead of building on his weakness in Syria and Yemen.

Presidents Johnson, Nixon, and Ford (actually, Kissinger during the Ford era) already well understood the regional dynamics. They denied the simplistic image that put Israel versus the “Arabs” and called upon the US to choose between them. They defined the camps as they were: the radical elements supported by the USSR on one side; and the US, most of the Arab states who feared radicalism and Israel on the other side. They understood the opportunity that the defeat of Nasser, his partners, and their Soviet sponsor offered in the 1967 Six-Day War, and made him choose between deadlock and destruction in a format that existed since the 1950s, and the American camp, which would pull out his radical teeth. Nasser refused and lost his standing. Sadat complied, with his conditions, as part of the agreement after the Yom Kippur War, in which the US, Israel, and Egypt itself won, and the USSR, Syria, and the PLO lost.

Two presidents deviated from this line and failed with their policies. Carter pushed for a “comprehensive arrangement” that would include all the radicals. Sadat, who feared all of Egypt’s achievements would be lost thanks to a “half baked” president’s illusions, took a revolutionary step, and offered a separate peace deal with Israel. Carter had to change direction, and even helped bring the deal to fruition at Camp David. Obama combined ideological commitment to the Palestinian cause with an overestimation, completely disconnected from reality, of their weight in the region, and wasted his presidency on amateurish attempts to reach an impossible agreement between them and Israel.

Trump sees the region as it is, except for his mistake concerning the danger of Erdogan and the Muslim Brotherhood. He understands that the direct involvement of US troops in the region not only has low support among the American public, it’s also strategically ineffective. They belong in Asia, and especially the South China Sea.

In the Middle East, it’s important to identify the main enemy of the US and its allies – Iran, weaken it and damage it as much as possible, give full and reliable support to the regional forces who fight against it and encourage them to act together and help each other. This is the significance of the alliance between Israel, the US, and the main Sunni states while circumventing the Palestinian veto. This is what is justifiably being celebrated in Washington.

*This commentary was published by Israel Hayom, on September 16, 2020.

previous post CyberWar: What if…?
next post Why Marijuana Legalization is a Very Bad Idea
Back to top
mobile desktop