President Donald Trump has canceled the planned June 12 summit in Singapore with North Korea’s dictator, Kim Jong-un. This came after repeated complaints from North Korean officials and news organizations, the latest by a North Korean Deputy Foreign Minister who called Vice President Mike Pence “stupid” for making “unbridled and impudent remarks.” Along with directly insulting the Vice President of the United States, the North Koreans also went out of their way to make it clear that the Deputy Minister’s remarks were pre-approved by Kim himself.

With clear insults of top American officials, and a crazy North Korean assertion that Kim would not “beg” for any meeting with President Trump (even though, as Mr. Trump’s letter to Kim clearly asserts that the request for a summit came originally from North Korea), the President had little choice but to cancel the meeting.

In simplest terms, no President can negotiate with a counterpart when the counterpart is spewing out insults.

But there is almost certainly more to the story. Kim appeared to be in serious trouble at home and was seeking to find a way out with President Trump. He threw the dirt and Trump obliged.

The issue on the North Korean homefront –according to some Asian diplomats with diplomatic ties to North Korea– is Kim’s “peace moves” are under heavy challenge from hardliners in North Korea who are opposed to any agreement with the United States that would remove North Korea’s nuclear weapons.

North Korea is a very poor and immensely corrupt country run under a harsh dictatorship. The country is populated with Gulags designed to punish malcontents, and the level of brutality is great.

The country has a tiny economy, lacks sufficient electrical power, is plagued by poverty and poor harvests, and its infrastructure is fragile. Only three percent of the roads in the country are paved, and most of the people lack electricity and sanitary homes.

Any look at North Korea’s military is illustrative of the inherent weakness of the regime and registers clearly why it wants to have nuclear weapons.

Most of the equipment of Korea’s three main military services is old and obsolete. The Air Force is running machines designed in the 1960’s and 1970’s that lack up to date electronics and modern missiles. Mostly made up of Russian castaways and some Chinese clones of old Russian designs, Kim’s air force wouldn’t survive for ten minutes against either South Korea’s or Japan’s, not to mention what the US could throw at the north. The North Korean navy is running very old Russian submarines and trying to convert one of these designs into an underwater missile platform. It still has a long way to go. The army is the best equipped with large numbers of obsolete tanks and plenty of artillery, especially multiple rocket launchers that appear to be reasonably modern. But all these assets can be destroyed by air power,

meaning that while North Korea’s army can cause a lot of destruction, it will pay an exorbitant price being fully exposed to the air power and missiles of its enemies.

The North-South balance of power is less important to North Korea’s leaders than how they stack up against Japan and the United States, and maybe even China since there is uncertainty in North Korean power circles just how “reliable” the Chinese are and whether they are only a fairweather friend and can rapidly matriculate into an enemy.

North Korean military leaders (who run the country) understand they lack financial and industrial resources to concentrate much on conventional weapons. Nuclear weapons are a cheap alternative for dictators, which is why the likes of Saddam Hussein, Muammar Khadafi, and Ali Khamenei sought nuclear weapons. The latest discovery of Iran’s secret missile base illustrates clearly that Iran continues down the nuclear path.

Kim got himself in trouble when he pushed the idea that North Korea would be willing to give up its nukes in exchange for security guarantees from the United States. In a stroke, he seemed to undermine the entire national security strategy of the North’s military leaders and showed a willingness to put the country’s security in America’s hands. For the hard liners in the North, all of whom are military leaders this was a bridge that not only was too far but was one that was falling on their heads.

Some of the Asian diplomats think that Kim may not survive although perhaps he bought himself some time since trump canceled the June 12th summit.

Regime change in the North appears to require some sort of venerated leading family as the sine qua non of its survival. While the famous grandfather of Kim Jong-un, Kim Il-sung was the first actual leader of the North, it was necessary to push aside others to get the post. Spending more than twenty years in exile in the Soviet Union, Kim hardly spoke Korean, his minimal education was in China, and he lacked any real administrative experience. He was not Stalin’s first choice for heading a new North Korean state, but after the leading candidates bowed out, or were pushed (in at least one case, shot), Kim got the job.

By contrast, Kim Jong-un is better educated, spent time in school in Switzerland and has shown that he is in control of the country. When his powerful uncle Jang Song-thaek was plotting, probably with the Chinese and was trying to persuade Kim-Jong-nam, Kim-Jong-un’s half-brother to participate in a coup d’etat, Kim Jong-un put Jang on trial as a traitor and immediately had him executed. Later he arranged to have his half-brother assassinated at the Kuala Lumpur international airport using VX nerve agent (which could well have been supplied by Russia). 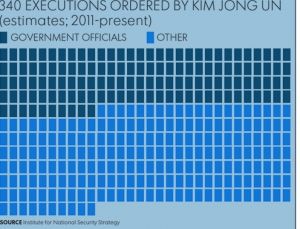 Has Kim dodged a bullet with the cancellation of the summit? It is impossible to tell. The hardliners may be satisfied, but they also may worry that Kim will do a deal under the table and pick them off one by one for killing his summit with Trump. In fact, judging by his prior behavior, he will seek revenge for having lost a chance to glorify himself on the world stage.

It will be interesting to see how China reacts to the cancellation of the summit, which is also a significant blow to Chinese prestige. Perhaps they will move in with alternative candidates for Kim’s job.

And Russian interference cannot be ruled out. Russia won’t be unhappy if the Chinese have a comeuppance, and Russia may see an opening especially with a disgruntled North Korean military to give a push to a coup d’etat, especially if it bolsters their influence.