Jesus is No God – Says a Canadian Islamic Charity 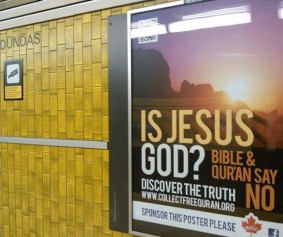 “Is Jesus God?” A billboard posted at Dundas Subway Station in Toronto asks. The screaming poster’s words answer: “Bible & Quran say NO” further instructing the reader: “Discover the Truth.”
CoolcetfreeQuran, a Canadian registered charity, sponsors the poster and calls for contributions of $600 per month, or $150 per week, or $20 per day to maintain the poster. This ad and the facebook plea would have made Vladimir Ilyich Lenin proud: While belittling the core of Christian belief, this Muslim “charity” is soliciting Christian funds to destroy it.
This is but one of recent examples of how blatantly Islamic organizations are advancing their agenda of global Islamic rule.

Jonathan D. Halevi, a Senior Fellow at ACD calls our attention to a new Islamic street ad in Toronto regards Jesus as a Muslim Prophet and implies his future role in ridding the world of evil and establishing the rule of Islam globally.

“The Group of Mercy,” Dawah (propagating to Islam) group lead by a group of young Muslims in Greater Toronto Area, are running on Christmas Eve and until mid-January 2014 a new street ad campaign that targets the general public, and specifically the Christians.

On November 16, 2013, “The Group of Mercy,” co-founded by Mahmoud Abou-Elneel and Dina Kamal, announced that it “was able to raise the full target amount” (i.e. $5,000) and “will be able to post 2 street Ads in different locations for one month each.” A month later the group posted pictures of the street ad that posted at 374 Dupont Street, South of Dupont Subway station.

The Quran quotes Jesus speaking in his cradle saying:

“And peace be upon me

the day I was born, and

the day I die, and

the day I shall be raised alive!”

May peace and blessing be upon Prophet Jesus

[Logo of the Group of Mercy]

The meaning of the Quranic verse

On its Facebook page the “Group of Mercy” explained the nature and the goals of the campaign, titled “Jesus is our beloved prophet,” as follows:

“We are planning to post an Aya about prophet ‘3esa’ [Issa] or ‘Jesus’ peace be upon him this December to educate GTA residents about Islam prospective in regards to prophet 3esa (PBUH). This post will be seen by about 100,000 people/day, imagine if you are part of this project how many good deeds ‘Thawab’ [reward] you can get.”

The Quranic verse, chosen as the main and only message of the street ad, conveys to GTA passersby the tenets of the Islamic faith regarding Jesus. The Quran in Chapter Mary quotes the first words uttered by Jesus just moments after he was born, and this newborn’s statement serves (in the broader context) as evidence that Jesus was neither born a Jew nor he was a “son of God.”

Jesus, according the Quran, was a flesh and blood human being, who was destined to prophecy since his miraculously conception in Mary’s womb. Jesus’s role to call upon all mankind to follow the teachings of Islam was not ended when he was rescued by Allah from being crucified and was raised up to Him. Jesus, according the Islamic belief, is waiting to be sent alongside the Mahdi (prophesied redeemer of Islam) at the end of days to rid the world of heresy and evil.

The Quranic verse, quoted in the street ad, alludes to the future and final mission of Jesus (“the day I shall be raised alive!”) on behalf of Islam. The website http://www.discoveringislam.org brings as follows a concise description (embedded with Islamic narrations) of the Islamic eschatology regarding the prophesied series of events prior the Day of Judgement.

“…The emergence of the Dajjal (AntiChrist or False Messiah) is the most dangerous among the signs that indicate the Day of Judgment is approaching, even people with strong faith will be shaken. Allah created the Dajjal to test people’s faith… This will trigger the descent of Prophet Jesus Christ from Heaven… In a way, God uses the Dajjal to mock and test the followers of false/corrupted religions of Judaism, Christianity and Shiism… Faithful Sunni Muslims are less susceptible to be tempted or deceived by the Anti-Christ… The Dajjal will finally be killed by Prophet Jesus ‫عليه السلام‬ [peace be upon him] who will descend to Earth and spread peace…

“We think his staunchest followers will most likely be Zionist Jews/Christians, and possibly some of the Shia… The End of the Dajjal (Anti-Christ or False Christ) & his Followers…

“Abu Huraira reported Allah’s Messenger ‫صلى الله عليه وسلم‬  [peace and blessing be upon him] as saying: ‘The Last Hour will not come until the Muslims fight against the Jews and the Muslims kill them to the extent that the Jews will hide behind a rock or a tree and the rock or the tree will say: O’ Muslim, the servant of Allah, there is a Jew behind me; come and kill him; but the Gharqad tree ( Boxthorn tree) will not say that because it is the tree of the Jews.” (Sahih Muslim) The Jews are currently planting lots of Gharqad trees in Israel to protect them…”

“Based on various Islamic traditions, Muslims believe that the Dajjal will be Jewish.  The title of a book by Muslim author Matloob Ahmed Qasmi, Emergence of the Dajjal, the Jewish King couldn’t make this point more clearly.  Imam Sheikh Ibrahim Madhi of the Palestinian Authority articulated the Islamic perspective regarding the expectation of the Jewish people quite well in one of his sermons:

“Samuel Shahid, a Christian Arab scholar in his scholarly study of Islamic eschatology says of the Dajjal that he will be, ‘the embodiment of the Jewish hope and longing.  The bulk of his army is recruited from the Jews.’

“As mentioned in the last chapter, the followers of the Dajjal will primarily consist of Jews and women.  It is mentioned that women are very ignorant and as such are easily misled.  Veliankode states, ‘Meanwhile, women will also fall to the deviant line of the Antichrist because of their unawareness and ignorance of Islam.’

“Slain By The Muslim Jesus

“As mentioned in the last chapter, it will be the Muslim Jesus who will kill the Dajjal and his followers:

“Allah’s Messenger said: …the time of prayer shall come and then Jesus son of Mary would descend and would lead them in prayer. When the enemy of Allah (Dajjal) would see him… Allah would kill them by his (Jesus’) hand and he would show them their blood on his lance (the lance of Jesus Christ).”

The website http://www.missionislam.com brings the following description of the last days that usher the era of enforcing the Islamic rule worldwide:

“The Destruction of Al-Masih Ad-Dajjal

“As was narrated in the Hadith by An-Nawwas bin Sam’an, the Dajjal will be killed at the hand of Jesus son of Mary.

“The Dajjal’s death will occur after the angels turn him towards Ash-Sham away from the outskirts of Madinah. He will perish in Ash-Sham near the eastern door of Lud in Palestine, may Allah (swt) return it to the Muslim.

“Before we start mentioning the second coming of Jesus son of Mary, we will mention the story of Al-Mahdi, Muhammad bin Abdillah.

“Al-Mahdi will appear just before the coming of Jesus, alaihis salam [peace be upon him]. He will lead the Muslim nation with justice and kindness and establish Allah’s rule. A righteous Caliphate will reappear after the earth has experienced its share of injustice and tyranny. Jesus, alaihis salam [peace be upon him], son of Mary will pray behind him. Among Al-Mahdi’s characteristics is that he will spend money on his subjects without counting it, along with many of his other righteous deeds that were mentioned in several correct hadiths.”

In this regard see also:

Islamic Ad Campaign to be launched in Toronto Christmas eve: “Jesus is our beloved prophet”; explicitly “refutes the erroneous Christian creed of the Divinity of Jesus”

(See web version of this article for a video here)