To the Finland Station* 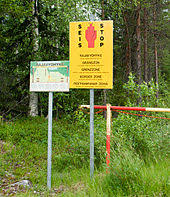 While the U.S. debates whether it has “a Russian problem,” little Finland [6 million] is again fearful of wrestling with its old neighbor.

There is a new wrinkle in the Russia-Finland encounter, however. The Finns are always feeling threatened by their giant neighbor now planning one of its largest military exercises in years. In riposte, the Finns are going underground. A subterranean city beneath Helsinki forms its critical line of defense. Finnish soldiers routinely train there with the aim of keeping Finland’s government running and city residents safe in any attack. A network of more than 124 miles of tunnels, passageways, and shelters supplies utility and subway tunnels, communications, water supply and Wi-Fi. There is shelter space for all the city’s more than 600,000 residents.

The Russian war games will take place on Finland’s northern border as the North Atlantic Treaty Organization [NATO] simultaneously boosts its presence in the three Baltic states just across the Gulf of Finland. Finland maintains the fiction of its neutrality between Moscow and the West by remaining outside NATO even though it is increasingly dependent on Western – and especially U.S. – arms with an equally officially neutral Sweden.

Much of the relationship is based on the history of The Winter War when Josef Stalin’s Soviet Union tried to subdue what was then a small largely agricultural society gangling off neutral Sweden to the West. [Finland has a substantial Swedish minority and considers itself bilingual.] But with the Western democracies, and much of the rest of the world, cheering, the little Finnish army with its ski troops and other knowledge of winter warfare, held off the Soviet giant for nine months. In the end, it lost 10% of its territory – including its Arctic port was ceded to Russia and it had to absorb a half million Finnish ethnics [12% of its population] as refugees from the Karelian peninsula reaching toward Leningrad that had been Moscow’s target.

One of the great ironies of modern history is that the threat of aggression and reincorporation into a Russian empire has raised Finland to one of the most prosperous and technologically advanced societies. [The per capita income is 222% of the world’s average.] That’s despite its isolation at a frigid corner of the world.

The original $300 billion [1939 prices] of reparations which Helsinki agreed to pay the Soviets built a new manufacturing and economic complex that ultimately delivered by 1952, 340,000 railroad carloads of goods and services to Moscow. The economic effect was to turn Finland increasingly into a high tech industrial economy culminating in its leadership of the new wireless telephone industry in the late 1990s.

More than ever, more alarmed than a Western observer, Helsinki has seen the Russian seizure of Crimea ahead of Moscow’s 2014 annexation of the Ukrainian peninsula as a model for a new threat to its independence. Its military has carried out an exercise based on a recent, real-world scenario including a takeover of government buildings by foreign special forces, like those of the Russians on their southern flank. Some of those war games were held in Helsinki’s underground labyrinth.

Finland also says it has faced Moscow’s use of pro-Russian activists, propaganda and political pressure on Finnish politicians since the Cold War. And although maintaining its strict formal neutrality, Finnish authorities say they have seen concerted efforts by pro-Russian nongovernmental groups, social media accounts and cyber attacks attempting to influence domestic politics.This year 10 NATO countries and the EU committed to establishing a research center focused on hybrid warfare, to open in Helsinki in September.