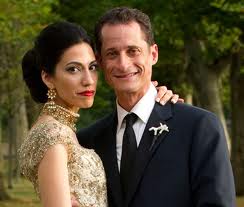 “There’s no such thing as bad publicity” is a favorite saying of America’s bad boys and girls.  It used to mean that it wasn’t so bad if one were accused of things that couldn’t be proved. Being compelled to practice “plausible deniability” was better than not being noticed at all.  Since the Clinton presidency, however, it’s become clear that actually doing bad things is a way to advance if you have certain sorts of politics.  Where we used to forgive and forget, we now seem to remember joyously and ignore the meaning of what was done by what the cultural elite regards as “good people.”

The media has had a field day with New York City mayoral candidate Anthony Weiner’s admission of further lewd indiscretions.  The pathos and bathos of his recent press conference and the humiliating complicity of his wife, Huma Abedin, has been taken as cause for fun, rather than cause to ask “Have we come to this?”  Well, maybe that’s too strong; but ask yourself whether humorous pieces of writing will push Anthony Weiner out of the political scene.  See here and herefor two of the better light-hearted media efforts, these clearly by writers who would like to see Weiner gone.  This is as far as the media can go without being accused of politicizing bad behavior (these days, worse than bad behavior itself) or being hate mongers.

Leaving aside the character of a guy who shows off his plumbing on the Internet and refuses to pronounce his name as it’s spelled (perhaps to subliminally reinforce his priorities), there are some serious questions that need to be raised.

In fact, they’ve been raised in the past and have not been taken seriously given the “enlightened” policies of the Obama administration and the major media’s slavish devotion to the “progressive” president. They were raised during Republican primary struggles by Michelle Bachmann and others and quickly dismissed as nasty attempts at unfair guilt-by-association and Islamophobia.  We’re speaking here, of course, of Weiner-wife and Hillary Clinton deputy chief of staff Huma Abedin’s past association with Islamists. That the associations are unambiguous, beyond doubt, and enough to bring down anyone in public life who isn’t a card-carrying member of the progressive elite has brought no serious concern, except to people the progressive elite regard as fools and mountebanks.

We can even leave aside here Abedin’s 20-year association with Hillary Clinton and the fact that she was a close adviser during Hillary’s secretary-ship.  Only “phony scandal” purveyors would question how Abedin could have drawn a $100,000-plus salary from Hillary (and paid more than $300,000 annually by Bill in the private sector at the same time) without raising objections from somebody. Who cares if she wasn’t in her Washington office?  All that is in the past. And who cares if Weiner-Abedin is a cadet branch of the House of Clinton?  The New York City mayor’s race and the political future of Anthony and Huma Weiner-Abedin is what’s important.

Here are the important questions and some speculative answers that tell us at the very least what ought to be eliminated in judging what was really going on during the Weiner-Abedin press appearance:

* Why, given the latest public humiliation, is Anthony Weiner staying in the mayoral race?  He, of course, says it’s because he’s a champion of the middle class.  We speculate that it’s because the “progressives” and their financial backers wish him to. After all, in spite of his sexual harassment of women on the Web, he is a “right-thinking” guy. Although we know we’ll burn in media hell for saying it, we have to find out whether there’s Islamist (say, Saudi Wahhabi and salafist) money behind Weiner.

If you were an Islamist, wouldn’t you like to have some influence in the Big Apple (even if it becomes in time the Small Weiner-Kebab)? You could get the very effective Ray Kelly and the NYPD off the backs of your operatives, maybe. At the very least, you might be able to convince Anthony not to say certain sorts of things.

* Why did Abedin humiliate herself by appearing at the press conference?  Speculation has it that she was trying to ease her humiliation by showing that she could replicate Hillary Clinton’s handling of her own marital humiliation.  Abedin’s remarks made the claim that she was in charge and Weiner wouldn’t do “it” again, by God!  Some commentators have suggested that Abedin was trying to affirm Hillary’s view that power is more important than dignity if you were “the right person.” Others, more prescient, say that Abedin was launching her own political career.  If Weiner cannot take New York City for the progressives and Islamophils, maybe Abedin can become, say, senator from New York in time. Short of that, Abedin as a rising New York political figure would of course be helpful to Hillary’s upcoming presidential campaign.

* What do Abedin’s past associations with Islamists have to do with current events? Nothing, apparently, as Abedin has not even bothered to publicly renounce them. Yes, we know, she was born into some of them, poor thing.  But what about the others?  If she’s a reformed Islamist (maybe), the current politically correct way of proceeding is to say nothing about it, as acknowledging the same is tantamount to Islamophobia. If the Islamist community supports one, why draw attention to that?

Hillary Clinton has never given an explanation as to why she engaged a deputy chief of staff with such troubling credentials.  That, we submit, tells you everything about the progressive elite’s values.  They feel they are immune to outside influence whatever they might do.  How dare anyone to speculate otherwise?  Only their small-minded adversaries are capable of such thoughts.

The bottom line here is fairly simple. “Good people” can do no wrong and therefore any publicity about them is good. Such a “good” American, who’s just a bit “naughty” – even if he/she are involved with or tolerating and supporting our enemies – is regarded these days as so much healthier and realistic and (profitable) than anything morally priggish.