The U.S. Needs To Protect Taiwan 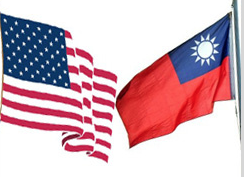 China has been pushing back after President-elect Trump’s policy -shattering phone call with Taiwan’s President Tsai Ing-wen, demanding that the Taiwanese President not be allowed to transit the United States through New York on her way to a Latin American tour.  The Chinese worry there may be a face to face meeting between Mr. Trump and President Tsai.  China has often used this kind of pressure to intimidate the U.S. and other countries.  The answer, of course, is as Ambassador John Bolton put it, “the president of the United States [will] talk to whomever he wants if he thinks it’s in the interest of the United States, and nobody in Beijing gets to dictate who we talk to.” Indeed, it is about time to stand up and refuse to kowtow to Chinese demands and, even more importantly, to point out China’s aggressive moves and demand they stop.
Under the Taiwan Relations Act (TRA), passed in 1979, the U.S. has two primary obligations.  The first is to  “make available to Taiwan such defense articles and defense services in such quantity as may be necessary to enable Taiwan to maintain a sufficient self-defense capability.”  The second, similarly important, is “to maintain the capacity of the United States to resist any resort to force or other forms of coercion that would jeopardize the security, or the social or economic system, of the people on Taiwan.” Has the U.S. fulfilled its obligations under these two provisions of the TRA?  The answer is clear: No. The U.S. has not lived up to its responsibility.
To get an idea, look at Taiwan’s objective defense situation:
Taiwan received its last modern fighter aircraft from the U.S. in 1992, in a transaction approved by President George H.W. Bush.  Taiwan’s repeated attempts to get an updated version of the F-16 jets they bought from President Bush have been turned down.
Taiwan’s requests for getting new submarines, which would be an important deterrent to China, did not fare much better.  Taiwan has only two old decrepit operational subs.   At first, the U.S. said it would, then it did not and let the Taiwanese bumble along with what they had.
There are countless other examples.  When Taiwan gets any arms from the U.S., it gets cast offs, like the FFG-7 Oliver Perry class Frigates built under the Carter administration that the U.S. no longer uses or wants to use. The last of these Frigates was retired in 2015.  So the Taiwanese have been left with slow tubs that have little firepower, and are easy targets for Chinese ships and submarines, not to mention Chinese aircraft that can hit them at will.
Meanwhile, China has been modernizing its armed forces, even to the point of now showing off two models of stealth aircraft, one that looks suspiciously like the F-22, and another that seems to be a knock-off of the F-35.  Worse still, China is deploying intermediate and short-range ballistic missiles aimed at Taiwan.
Over the years the United States has tolerated China’s growing military modernization, not complaining at all even about the missiles aimed at Taiwan.  And while Taiwan will get the PAC-3 air defense system (Patriot), it is unproven against an intermediate range ballistic missiles and has only limited range, meaning if you miss on the first shot you don’t get a second chance.
There are, of course, systems that could be a big help to Taiwan. Taiwan needs the Terminal High Altitude Area Defense system (THAAD). And the U.S. did not allow Taiwan to buy the Israel-US Arrow II, a better system than the THAAD that can go after multiple threats at a long distance.  There are creative ways to provide this sort of defense to Taiwan.  As the TRA declares, such systems could be put on Taiwan under U.S. control demonstrating that the U.S. will resist “any resort to force or other forms of coercion that would jeopardize the security or the social or economic system of the people on Taiwan.”
A good example of the sort of coercion the TRA was intended to counterbalance, are the more than 2,000 missiles that China is now aiming at Taiwan, according to recent news reports.
One of the most important policy changes the Trump administration can make is not to allow China to continually beef up its forces and coerce its neighbors, as well as Taiwan, which is more than 1,300 miles away.  The U.S. rule of silence needs to be replaced by the rule of counter-action.
But what about incessant Chinese complaining and threats?  Surely if the U.S. sells Taiwan new aircraft or other equipment, or puts missile defense systems on Taiwan, even under US control? China would certainly push back strongly.
The new President and his administration have a lot to do to rebalance the situation regarding China and Taiwan. It needs a combined political-defense approach.
On the Political side – to stand up to Chinese demands and make it clear to the Chinese leadership that military actions are seen as hostile, and therefore are unacceptable. On the Defense part – the U.S. should be providing to Taiwan equipment that is urgently needed, as well as to find ways to relieve China’s military pressure on Taiwan.