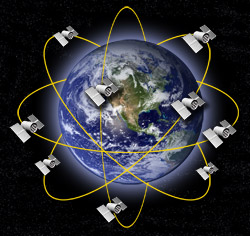 The Global Positioning System (GPS) is the most important technology and capability ever developed and fielded by the military forces of the United States. Originally, conceived as an aid to weapon delivery and navigation for the military, the system is no longer considered only a military system. Its uses and importance have exceeded the wildest dreams of its developers. While it is still maintained and operated by the U.S. Air Force, it has become a critical instrument for supporting and enhancing the lives of all Americans. Indeed, it also performs this function for many societies throughout the entire world.

GPS navigation systems appear in many automobiles, and most are familiar with their use in driving from place to place. GPS is also the primary enabler of aircraft instrument approaches during bad weather. But less known is that GPS position measurements now determine property boundaries and its receiver has replaced the standard surveying tools, such as transit and measuring tape.

Even fewer Americans are aware of the importance of the timing accuracy delivered by GPS. Modern digital communication systems require that the transmitter and receiver be accurately synchronized. The timing required to perform the synchronizing of transmission and reception in almost all modern communication systems in the U.S. is generated by GPS. Putting it simply:

The financial loss incurred as the result of a system failure would be immense.

The important questions is: Can the system fail, and if so, how?

Of course any electronic system can fail as the result of natural, or manmade, faults, but GPS has proven itself nearly impervious to electronic, or natural failures, such as solar storms. There is no reason to believe that this pristine performance will not continue.

The signals that enable the essential capabilities of GPS are generated by satellites orbiting at an altitude of, approximately 20,000 kilometers above the earth. Therefore, the signals received are very weak. They are strong enough for most applications and for exceeding the effects of thermal noise and weak interfering signals.

However, it is not difficult to jam the GPS signals, even by low power and inexpensive electronic transmitters. Currently, the most prevalent GPS jammers are sold on the Internet and are used by professional drivers to disable fleet tracking devices designed to monitor driver performance. Although the sale and use of such jammers is illegal in the United States, enforcement of the applicable laws appears to be very weak and ineffectual.

Terrorist or unfriendly nation could also jam the GPS signals. But given the geographic realities of the location of the U.S., such actions could be detected, and stopped, quickly, if properly monitored. Yet, there is no national network of jammer detectors and locators.

The detection and location of GPS jammers is a rather straightforward and well-known technology. It would be an inexpensive and simple task to establish a national network of jammer detectors and locators coupled to a network of trained first responders with arrest authority that could find, and disable jammers.

This task appears to be a natural function for the Department of Homeland Security (DHS). Yet, despite the importance of GPS, the apparent indifference toward and neglect of this simple effort is amazing and unconscionable. It may be reasonable to call upon DHS to account for their neglect of this possibility.

There are those who propose a backup or alternative system to be used in case of GPS failure. The system being most strongly for this application is an upgraded, or enhanced, version of the World War II Loran system, called eLoran.

Make no mistake, though, compared to GPS eLoran is an inadequate, and obsolete technology. The worst performance in the history of GPS is better than the best performance of eLoran. The major justification seems to be that there a number of Coast Guard owned and maintained Loran towers and buildings that could be used to house and project the eLoran signal. Frankly, though, the system is not worth the cost of stopping the rust and increasing dilapidation of the facilities. Given that the Coast Guard as a leader in the fielding national differential systems to increase safety in port areas, it is somewhat surprising that they are now supporting such a retrograde technology as eLoran.