Depending on how one crunches the numbers, China’s economy has either already surpassed, in size, that of the United States, or will do so in a within a couple of years.  According to data from the World Bank, it is the former, China’s nominal GDP was $19.3 trillion in 2015, while U.S. GDP came in at $17.9 trillion.  One difficulty in comparing national economies is calculating each country’s gross domestic product (GDP) in a common currency—usually in U.S. dollars.  A second is adjusting the GDP numbers to take into account purchasing power parity (PPP).

Whether or not China’s economy is larger than the U.S., the former’s economic growth over the past three decades is nothing if not incredible.  In turn, it has created some angst among Americans.  Mike Patton writes in Forbes:  “China’s economy will become more significant than America’s.  How is this possible?  Is the golden era of “Made in America” in our rearview mirror?  Is China entering a modern-day economic dynasty?”  Based solely on the dollar size of GDP, yes China is projected to far surpass the U.S. in the coming years.

True economic dominance is more than just the dollar size of GDP.  In their 2013 book, Balance:  The Economics of Great Powers from Ancient Rome to Modern America, economists Glenn Hubbard and Tim Kane developed an economic power index (EPI) which they believe is a better measure of a nation’s economic vitality and supremacy.  The index is comprised of the product of three components:

Where:    GDP = nominal GDP in billions of dollars

Productivity = per capita GDP in thousands of dollars

Using the EPI formula developed by Hubbard and Kane and data from the World Bank, I calculated the index of each country of the world.  The table below shows the indexes for the ten largest countries.  This analysis shows that far and away, the United States is the dominant economic power in the world—not China, not Japan, not Germany. 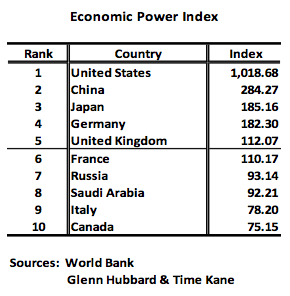 What sets the United States apart from China is the productivity statistic—i.e. per capita GDP.  This figure indicates how efficiently a country’s citizens use their resources and talents.  In 2015, per capita GDP for the U.S. was $55,805:  but was only $14,107 for China.  This means that each American produces, on average, nearly $56,000 worth of goods and services.  If China had the same per capita GDP as the U.S.—i.e. that the Chinese are just as efficient at Americans—its’ GDP would be $76.7 trillion.

As productivity is important to a country’s economic vitality, so too is the growth rate of a county’s economy.  If the China’s economy grew at a one percentage point lower rate than projected—a seven percent pace rather than an eight percent—over the next sixteen years, the Chinese economic power index would be 23 percent lower than the U.S. in 2032.

Though no country is likely to come close to the United States economic power anytime soon, the gap between the major western economies and the emerging markets will diminish in the coming decades.  One determinant of the size of an economy is a country’s population.  As the population grows, so does demand for food, housing, transportation, etc.  Given the globalization of the world economy, especially in finance, resources can easily flow to meet these demands.  This will likely result in higher growth rates for countries with growing populations.

The U.N. projects that the largest increases in population will be in the emerging markets.  For instance, it is expected that the continent of Africa will experience a 41.6 percent increase in population between now and 2030.  The population of Africa in 2030 will exceed that of China or India.  By 2030, countries in Western Asian and India will see population growth of 25 percent and 16.5 percent, respectively.

The same is not true for the largest economies in the world.  Over the next 14 years the U.N. forecast lackluster population growth for the current economic powers:  United States (10.6 percent population growth); China (2.9 percent); Germany (-1.7 percent); Japan (-5 percent); and Europe (-0.6 percent).

Countries can overcome anemic population growth through increases in productivity.  Currently, the U.S. and Europe outperforms the rest of the world because they make efficient use of their resources.  The question becomes can they keep this up.  The largest components of government budgets in these countries are pensions and healthcare.  These are basically transfer payments funded by current revenue streams.  In other words, they are underwritten by taxes on current production.  These transfers will drain resources from investment, which is the lifeblood of economic growth, to consumption.

Based on the Hubbard and Kane economic power index, the U.S. far outpaces its closest economic rivals (China, Germany, and Japan).  Still, that is little comfort to those Americans who are out of a job or living paycheck to paycheck.  To maintain economic dominance, the new administration, and Congress, need to incorporate policies that are designed to raise the level of productivity—not ones that solely redistribute money to politically connected groups.