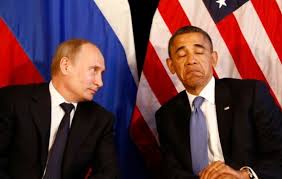 Barack Hussein Obama, with a group of largely ideologically primitive amateur policymakers but skillful media manipulators, set out in 2008 with the stated purpose to “transform” the American Republic.  Although their emphasis was more related to domestic issues, their goals also required a linked fundamental reorientation of American foreign policy.

With the prospect that in a few days, another defeat in Congressional midterm elections will severely limit his further initiatives in the remaining two years of the Obama Administration, it must be acknowledged that at least temporarily Obama & Co. have succeeded in their overall aims in the international arena.

That is a stark contrast to the domestic scene where most Obama policies have either failed spectacularly or are in a state of continued dispute in the face of, however eroded, traditional values, the weight of inertia, and that incredible American entrepreneurial utilization of technology. In energy, for example, perhaps the most important ingredient of economic policy, the technological breakthroughs in the exploitation of gas and oil—the shale gas revolution—have completely upended Obama’s energy strategy. Not only is the outlook for fossil fuel reserves, worldwide as well as domestically, been completely changed, but the always volatile energy costs now appear headed for a long period of falling real prices. Obama’s attempt to stampede the U.S. economy into highly government-subsidized so-called alternative sources of energy are in shambles—at an untold cost to the taxpayer, or course.

The Obamaites have been far more successful in their pursuit of a dramatic reorientation of U.S. foreign policy. It remains to be seen, of course, whether those initiatives are a permanent feature of the international scene. But, for the moment at least, Obama has accomplished his goals: Gone largely is continuing recognition of Washington’s post-World War II leadership of the coalition of allies that not only won the greatest war in history against the Nazis and Japanese militarists but also outran the threat of another totalitarian enemy, Soviet Communism.

The Obama view was that in the half-century-plus of Washington world leadership, if not in its longer history including slavery, America had made too many mistakes, that its worldwide dominance was on balance deleterious, that a better role would be one of, at most, primus inter pares. Furthermore, reaching out rhetorically to former perceived victims of American actions would be a pathway toward peace and stability. In short, what he and his colleagues saw as a more compassionate and understanding American executive could go far in curing the world’s problems rather than using its power to help stabilize the world scene. (Never mind their dismissal, if remarked at all, of the enormous extension of aid to the world over previous decades.)

To a considerable extent, Obama—with the aid, however reluctant she now says, of his former secretary of State Hillary Clinton—has been able to achieve these policies.

But the daily headlines also tell us that the goals of this strategy have not been achieved in any quarter of the globe. To the contrary, the world has hardly ever been in such disarray with or without an activist U.S. leadership.

Two points need to be made quickly:

The Obama Administration and its policies are not responsible for most of the world’s political problems, misgovernment, and violence. It did inherit what, despite one of the longest periods of peace in Europe’s history with its overwhelming influence on world affairs, was a volatile world scene. In short, the world is the jungle it always was. And recent events have shown us that political movements demonstrating the ugliest aspects of human nature, too, are still with us. In short, it is clear that no farseeing American strategy could have done more than ameliorate the world scene, as some of us would argue it did for some six decades.

Second, the history of ideas suggests that Obama’s international perspective did not spring like Athena fully formed and armed from Zeus’s forehead. Obama’s theories of international relations rely heavily on that strong undercurrent of American thinking that always sought to minimize our exposure to the rest of the world’s problems. That was the case, rather successfully throughout most of the 19th century with the help of His Majesty’s British Navy, and the God-given geographic isolation that two oceans afforded the U.S. (One has to recall, for example, that only a little over a year before the Pearl Harbor attack, legislation for extension of universal military service passed the House of Representatives by only one vote.) Not only was that complicated concept, generally dubbed “isolationist,” part and parcel of American political thinking from the beginning of the Republic, but its supporters in more recent past have included a wide swath of supporters across the political spectrum from “prairie radicals” to the complex sympathies of the warring parties in the U.S. electorate. (Pacifist and Socialist Norman Thomas sat on the same “America First”—the most active of prewar isolationist organizations—platform with members of the pro-Nazi German American Bund in Yorkville in 1940.)

Still, the list of successful “accomplishments” of the Obama strategy to diminish America’s role in international affairs is long.

• By abandoning the deployment of anti-missile bases in Poland and the Czech Republic, arduously negotiated, Washington not only dealt American missile defense a body blow but awakened the old threat of decoupling European security from America’s worldwide strategies.

• The refusal to lead the alliance that overthrew Qaddafi in Libya resulted not only in the tragic and ignominious death of an American ambassador and three other Americans but is leading to an anarchic situation there—with its threat to Egypt and the rest of North Africa and oil markets—with possible jihadist ascendancy.

• An amorphous position toward the U.S.-Israeli alliance, despite pro forma statements to the contrary, emboldened jihadist Hamas and further diminished the possibility of a Palestinian negotiating partner for an accommodation between the Jewish state and the Arabs.

• The refusal to lead a Western alliance in support of Ukraine against the Hitler-tactics of infiltration and puppetry of Russia’s Vladimir Putin has not only diminished the fragile Kyiv government but put into question the guarantees of the NATO alliance to its Central and Eastern European members.

• Neither Obama’s ostensibly seminal addresses in Cairo and Istanbul with apologies for pretended insults to Islam by the U.S. and a more than sympathetic reading of the history of Islam have improved relationships with the Muslim world nor diminished the growing traditional jihadist elements of Islam.

• Courtship of the controversial Muslim Brotherhood, apparently a critical part of Mr. Obama’s CIA Director John Brennan’s nonconventional view of Islam, has widened the gap with the Egyptian military now ruling what has been the most important Arab country and a leader of the Muslim world and other Arab allies in the Gulf.

• A studied neutral position toward Chinese claims on Japanese occupied territory returned under bilateral postwar agreements to Tokyo and no immediate followup to Clinton’s statement of reorientation of U.S. strategy toward Asia has unnerved traditional Asian allies.

• Continued flirtation with the tottering Communist regime in Havana has encouraged Moscow to try to resurrect its alliance with Castro’s Cuba, encouraged elaborate Cuban espionage in the U.S., and undermined the continuing dissident democratic movement in Cuba supported by Cuban Americans in the U.S.

It is far from clear that, in the kind of volatile world in which we live, the “success” of Obama’s transformation of American policy would not be the object of a concerted reversal by a new administration in 2016. Or, indeed, as despite cryptic language and new names for old crimes (workplace violence for jihadist terrorism), the Obama Administration is now by force majeure being made to reverse course. The great danger is, of course, as in the present attempt to cope with the ISIS phenomenon in Iraq and Syria, that Obama’s half-measures will lead to further disaster.

* A version of this column will be posted Monday, October 6, 2014, on the website yeoldecrabb.com.