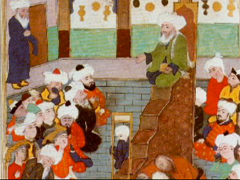 Quoting Iran’s official news agency, Agence France-Presse reported on 6 January that General Muhammad Hejazi, Iran’s Deputy Chief of Staff, had just announced that, if asked, the Islamic Republic of Iran was “prepared to provide military equipment and advice to Iraq to help it battle al-Qaida.” Only arms and advice was contemplated as it was said that the Iraqis “have no need of manpower.”

Hejazi claimed there had been no request from Iraq to “carry out joint operations against the ‘takfiri’ terrorists,” a term used to describe al Qaida and its various fraternal allies. In this case it would be to assist in the attack on the al-Qaida-linked Islamic State of Iraq and the Levant (ISIL), which leads the Sunni Muslim conflict in both Syria and Iraq. The ISIL has just taken control of Fallujah, a major Iraqi pivot in the Middle East conflict.

The Iranian announcement came within hours of reports on extensive fighting between Iranian-supported Huthi rebels (centered in Saada, a province in northern Yemen) and Sunni opponents. In two days of fighting the Shiite Huthi, joined by fighters from the Islah Islamist Party, killed dozens of Sunni tribesmen and al-Qaida backed rebels in Jawf, Amran, and Saada provinces. They now threaten to seize the Bart Al-Anan border crossing with Saudi Arabia, thus creating a dangerous situation with Yemen’s unhappy neighbor.

Saudi Arabia itself has been involved in events in neighboring Bahrain, a predominantly Shiite state governed by the Sunni Al-Khalifa royal family. A Shiite revolt emerged in February 2011 when thousands of protestors took to the streets, an event that led Saudi Arabia to send a military force to Bahrain to ensure the survival of the Al Khalifas. Just before New Year 2014 the Bahraini authorities arrested Sheikh Ali Salman, the Shiite leader of the country’s opposition al-Wefak National Islamic Society. He was accused with incitement during Friday prayers. Allegedly, Salman made comments “contained sectarian language to incite hatred.” After questioning, he was released later that day, with warning not to attempt to leave the country.

Elsewhere in the Muslim World the Sunni-Shiite divide widens. In Egypt, recent reports describe attacks on the small Shiite communities. In Pakistan, the minority Shiites have been under attack from the north to Karachi, which is located in the South, along the coastline of the Arabian Sea. And in Iran, the authorities are forced to contend with pesky attacks by the Sunni Baluch that populate a large part of southeastern Iran and western Pakistan.

Lebanon is now threatened with a Muslim civil war as Shiite artillery located in Syria bombs (often indiscriminately) Lebanese border villages. Meanwhile, Sunni jihadists tied to ISIL have begun to car-bomb the Shiite quarters of southern Beirut. Snipers have also created serious tensions between the Sunni and the Alewite minority in Tripoli city.

Seen realistically, there now exists a widespread war between Sunni and Shiite, the likes of which in its expanse has never been seen before in the Middle East and South Asia.

Since the palmy days of the Popular Arab and Islamic Conference (1991-1996), which met in Khartoum to unite in a single jihad the efforts of Sunni and Shiite, much has changed. Since the war in the Balkans, where Iran and Saudi Arabia worked together to arm and fund that jihad, the inter-Muslim rapprochement has been shattered. There was the war in Iraq which saw the replacement of a Sunni dictatorship with a Shiite government; there is a predominance of hardliners in the Iranian government and within its personalized military force (the Pasdaran); finally, the “Arab Spring” resulted in the weakening of Egyptian power and the emergence of a powerful Iranian government determined to enhance its war-making capability.

Tangentially, the rebel movement in Syria that sought to overthrow the Assad regime was stalemated and then placed on the defensive as Iran provided direct assistance to its ally. This eventually pitted Sunni against Shiite.

Will the situation be reversed soon?   It is fascinating to watch the ever-shifting Middle East kaleidoscope. Now it seems that an Egypt-Saudi Arabia-Israel alliance against Iran is emerging. Should the Erdogan regime be overthrown or replaced, Turkey would likely join the triad mentioned above. Such an arrangement, should it occur, would place Iran and its Shiite allies on the defensive. And where does Washington fit into the puzzle? In Foggy Bottom it seems that “leading from the rear” has become a habit, and it does not seem to care that Saudi Arabia, Egypt and Israel all mistrust the Obama administration.

*J. Millard Burr, author of “Alms for Jihad”, is a Senior Fellow with the American Center for Democracy.