The similarity between Hamas and ISIS 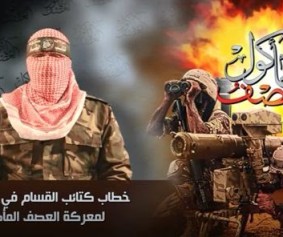 Hamas’s fighting methods in the current round of Israel’s Operation Protective Edge once again illustrate the practical and ideological proximity between Hamas and the notorious radical Islamic organization the “Islamic State” (ISIS).

From the onset, Hamas directed its massive and ongoing rocket attacks towards civilian targets to cause as much indiscriminate carnage as possible, similar to ISIS. Hamas has proven that its terrorist policy lacks any moral restrictions.

Hamas has boasted that it directed its long-range rockets more than once at strategic targets in Israel, which, had they hit their mark, could have lead to thousands and perhaps tens of thousands of casualties, including the Dimona nuclear reactor, chemical plants in Haifa, and the international Ben Gurion airport.

Organizations ideologically affiliated with ISIS, such as “the Islamic State in Bayt Al- Maqdis” have participated in the campaign against Israel. Hamas, which is the de-facto ruler of the Gaza Strip, provides a safe haven for all Palestinian terrorist organizations and allows the Al-Qaeda affiliates to operate freely (as long as they do not defy its orders).

On the ideological level, the religious commitment to genocide of the Jewish people in Israel repeats itself in the messages made ​​by leaders of Hamas and the terrorist arm of the organization. Similarly, in their remarks they also repeat the striving to reestablish the Islamic Caliphate, with its capital in Jerusalem, as part of a global revolution whose final destination is the release of Spain (Andalus) and Rome (the capital of the Vatican) ahead of a global Islamic rule.

Islamic laws are implemented in practice in Gaza, and Hamas MPs have already prepared a bill to amend the Criminal Code in such a way that it would allow execution over serious violations of Islamic law, including death by crucifixion, amputation for thieves, and lashes for alcohol drinkers.

Hamas and ISIS differ in two key issues: In the alliance Hamas signed with Shiite Iran (which angered Egypt and Saudi Arabia, which see Iran as a strategic threat) and in the willingness of Hamas to play the political game on the outside while applying ideological limitations. As part of this, and unlike ISIS, Hamas is willing to cooperate with human rights organizations to achieve its goals – the most important one at this stage being the tying of the hands of the IDF in attacking targets in Gaza, which means in practice to provide Hamas with a “licence to kill” Israelis while using civilians as human shields.