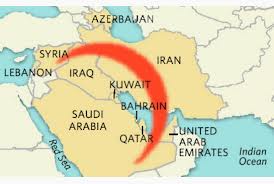 These are perilous times for the desert kingdom, which sees itself as the very center of Sunni Islam, which for Sunnis is the only true Islam. It is facing a highly complex and dangerous confluence of circumstances that would have seemed most unlikely even a short time ago.

Internally, the regime is facing growing demands for emancipation by women and modernization by the Saudi youth, as well as resistance from Asian and African “guest workers” who are being sent back to their home countries.  In addition, within the Saudi royal clan open fissures have developed between those actively scornful of the United States, the Saudis’ traditional allies and protectors, and those who prefer a softer approach hoping for a change in the American attitude.

Externally, the situation is worse.  Iran has moved from attacking the Saudi state and royal family to attacking the very ideological foundation of Saudi Arabia, the fundamentalist Wahhabi sect of Sunni Islam, referring to the Wahhabis as “heretics.”  Of course, for the Sh’ia all Sunnis are heretics, but more recently the Iranian mullocracy has been trying to unify Muslims to confront the West, the U.S., and Israel. With what the Iranians see as a “victory” in negotiations with the six powers they believe it is only a matter of a short time until they have the ability to produce nuclear weapons with which to threaten and blackmail their neighbors in the Gulf and the rest of the Levant.

An aggressive diplomatic campaign is being waged by Iran to try to drive a wedge between Saudi Arabia and its Gulf Cooperation Council (GCC) satellites, with some success, at least with Kuwait and Oman.  A Sh’ia majority in Iraq and Bahrain and a plurality in Lebanon is coupled with substantial Sh’ia minorities in Syria, Kuwait and Saudi Arabia itself. This provides Iran with the opportunity to promote sectarian unrest in all those countries, while developing a large zone of influence stretching from the Euphrates to the Mediterranean and down the west coast of the Gulf.

Feeling abandoned by the U.S., the Saudi government is actively trying to improve its military establishment, currently much inferior to the Iranian armed forces, through massive arms purchases, including ballistic missiles, and an overall defense cooperation agreement with Pakistan, including training in Saudi Arabia by Pakistanis.  Thus they hope to flank Iran on the east, through an alliance with a country that already has nuclear weapons.  They have maintained support for Sunni opposition groups in Syria and have donated two billion dollars to the Lebanese army to equip it to confront Hezbollah. They have protected the Sunni rulers of Sh’ia majority Bahrain and have joined other GCC countries in shoring up the military-backed government in Egypt.

As to Israel, the Saudis are natural geo-political allies and natural religious enemies, sometimes resulting in schizophrenic behavior.  The Saudi monarchy was never in the forefront of the confrontational Arab attackers of Israel, however, and on certain occasions tried to broker an Israeli-Arab settlement, offering recognition of the Jewish state in return for Israeli acceptance of certain conditions involving the Palestinians.  According to recurrent reports, the Saudis have offered the Israeli Air Force refueling rights in the northern province if the IAF attacked the Iranian nuclear facilities.

The world is a threatening and highly confusing place at present for Saudi Arabia and its ruling dynasty.  The jury is very much out at present and the military, political, diplomatic, and religious forces are well balanced, leading to increasing uncertainty.

The Guardian of the Two Holy Places (Mecca and Medina–the actual title of the Saudi king) is sitting on a very shaky throne and it behooves the government in Jerusalem to prepare for a number of different outcomes in the Arabian Peninsula.

* A version of this article will appear in Globes.