The Role of the Palestinians in the BDS Campaign 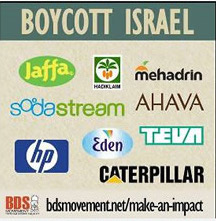 This study examines theroleof Palestinian activists and networks in Judea, Samaria and the Gaza Strip in the global BDS campaign being waged against Israel. The campaign, which originated with the first Durban Conference (2001), is being waged by anti-Israeli activists and networks around the globe, especially in the West. It is mainly waged by far left and extremist Islamic fringe groups.

The objective of the campaignis to label Israel as an “apartheid” country and promote an international boycott of its institutions, leaders, economy and culture, and of Israel’s supporters. Its final goal is to cause Israel to collapse, as the apartheid regime in South Africa collapsed. The campaign’s organizers oppose any recognition of the State of Israel or negotiations with it, reject the two-state solution, emphasize the so-called “right of return” of the millions of Palestinian refugees to the territory of the State of Israel and seek to realize the vision of one state ruled by Palestinians.

The BNC is an active partner in the anti-Israeli BDS campaign. Its hard core is a small group of Palestinian activists with no significant clout in internal Palestinian politics, but well-connected to the Western activists and networks leading the global BDS campaign. Two prominent members of the BNC are anti-Israeli activists who were educated in the West and studied at leading universities in the United States and Great Britain. The leading Palestinian figure is Omar Barghouti, a silver-tongued anti-Israeli Palestinian propagandist who calls himself a “human rights activist.” Over the years he has become a key figure in the BDS campaign in the West, especially the United States and Britain. Michael Deas, who studied at the London School of Economics, works alongside him. Today he is the BNC’s representative in Europe and operates in Britain, the center of the campaign to delegitimize Israel, and is also active in Western European countries and EU institutions.

The BNC pretends to lead the global BDS campaign, claiming it has massive Palestinian support. The conclusion of the ITIC’s study is that neither is correct, and that the BNC’s self-aggrandizement is part of its propaganda efforts to inflate its importance and image beyond what they are in fact. Thus, in reality the Palestinian BNC does not lead the global BDS campaign, which is a basically decentralized collection of interconnected networks without a well-defined hierarchy. In the internal Palestinian arena, the BNC does not have a genuine foothold in either Palestinian politics or society, neither in the Palestinian Authority (PA)-administered territories nor in the Gaza Strip. The conclusion of the study is that the BNC’s main importance, from BDS perspective, is in allegedly presenting the authentic “Palestinian face” of the campaign. That is important in the eyes of the anti-Israeli activists and networks around the globe that pretend to promote “the rights of the Palestinians.”

The PA and Fatah are not part ofthe BDS campaign, but regard it as an effective tool for exerting pressure on Israel. They wage an extensive anti-Israeli political campaign giving moral support to the global BDS campaign:

In the past strong differences of opinion surfaced between Mahmoud Abbas, the PA chairman,and Omar Barghouti, the prominent Palestinian BDS figure. The campaign waged by the PA and Fatah includes Israeli goods imported into Judea and Samaria, the boycott of goods manufactured in Judea and Samaria, and encourages states and companies to label products originating in Judea and Samaria.

At the same time the PA enables the BNC to operate from Ramallah, and on occasion uses the BDS campaign to support its own political, propaganda and legal campaign against Israel. The attempt to have Israel suspended from FIFA may indicatea drift in the PA’s policies towards adopting BDS tactics (BDS campaign activists said they were disappointed by “FIFA’s betrayal” [of the PA] but claimed they were certain the effort to isolate Israel around the globe would continue).

BNC and BDS activists around the globe often boast of the campaign’s many successes. An examination of the campaign so far indicates a significant discrepancy between its actual results and the formidable image its activists try to create for it:

In practical terms, despite localized successes, so far the BDS campaign, especially in the West, has not isolated Israel or significantly damaged its institutions, economy or culture. The campaign has also not enlisted countries and governments friendly to Israel or influential mainstream figures who believe in the two-state solution.

In terms of its image and public relations, most of the BDS campaign is still the field of action of extremist, anti-Zionist fringe networks and figures. However, during the past year, in a number of instances the campaign managed to enter mainstream public discourse and the leading Western media (for example, the argument conducted on the pages of the New York Times[1]). Moreover, during the past year the BDS campaign was given prominence by the Israeli media and political leadership. BDS activists were encouraged by the exaggerated Israeli media coverage, often quoting articles representing the campaign as “an existential threat” or “a strategic threat” to Israel. They leverage them to “prove” that the campaign is successful and effective(BDS activists recently quoted statements by Israeli President Reuven Rivlin and Israeli Prime Minister Benjamin Netanyahu regarding the BDS’ threat).

In ITIC assessment, the BDS campaign’s future effectiveness will depend primarily on the future of Israeli-Palestinian dialogue and negotiations. The easing of tensions between Israel and the Palestinians can allow the contradictions between the PA and Fatah on the one hand, and the BDS campaign on the other to surface, and cause the campaign to fadeand remain the province of extremist fringes. On the other hand, the growing tensions between the Israelis and Palestinians, and the continuation of the political and legal campaign the PA is waging against Israel, are liable to blur the distinctions between the PA and the BDS campaign, and to lead the PA to adopt BDS tactics (that is, other initiatives for boycotting Israel in international institutions, such as FIFA). In ITIC assessment the PA’s adoption of BDS tactics is liable to make the anti-Israeli campaign more effective.

For the full report, see here