The Religion of War 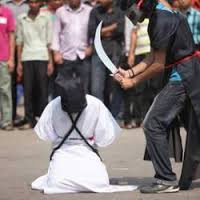 American and European leaders are “shocked” that the Islamic State (IS) barbarians beheaded two American reporters, Steven J. Sotloff and James Foley. Their “shock” is disingenuous and troubling. They react as though such barbarism is something new among Islamists. It is anything but. And if not earlier, then certainly in the aftermath of al Qaeda’s attacks on the U.S. on September 11, 2001, a spike in Islamic groups’ and individuals’ barbaric crimes has been reported worldwide.

Islamist beheading is nothing new. Open a Quran in any translation to find the instructions

that the IS and other jihadists groups are following, in the name ‘the Beneficent, the Merciful Allah.’ Bloody fighting as prescribed in the Quran serve as the foundation of their religion of War.

Here are a few examples: The Book of Muhammad, verse 4 (47:4) – “Therefore, when ye meet the Unbelievers (in fight), strike off their heads; at length; then when you have made wide Slaughter among them, carefully tie up the remaining captives: thereafter (is the time for) either generosity or ransom: Until the war lays down its burdens.”

According to the Book of Al-Maeda, verse 33 (5:33) -“The punishment of those who wage war against Allah and His Messenger, and strive with might and main for mischief through the land is: execution, or crucifixion, or the cutting off of hands and feet from opposite sides, or exile from the land: that is their disgrace in this world, and a heavy punishment is theirs in the Hereafter.”

And the Book of Al-Anfal, verse 12 ( 8:12) – “I (Allah) will instill terror into the hearts of the unbelievers: smite ye above their necks and smite all their finger-tips off.”

The IS and other jihadists are doing their best to follow the Quran’s barbaric instructions, using machetes, the popular modern version of the Prophet’s 7th-century sword. Indeed, a sword features in the national flags of Iran–the center of Shia radicalism, and Saudi Arabia–the center of Sunni/Wahhabi radicalism. The sword is not merely a symbol. The sword represents WAR. the most important value for this radical regimes.

The Saudi kingdom carries out barbaric physical punishments today as they have done since Ibn Saud founded it in 1932. Cutting off hands of thieves, stoning to death, beheading and crucifying those who violated the sharia, are carried out regularly.

Under Hassan Rouhani’s, the new “moderate” Iranian president, the number of officially reported executions increased from 580 to 687 (by the end of 2013 and in a more rapid pace since), the majority of which (68%, or 458) were carried out after Rouhani ascended to power, according to Iran’s Human Rights organization. The mullahs seem to prefer hanging, though the sword is

When American politicians and talking-heads point out that even Wahhabi Saudi Arabia and Qatar (47% Salafi/Wahhabi) are warning of the more radical Islamic State, take it with a grain of salt  and keep in mind that the Saudis fear for their kingdom and Qatar has been funding Al Qaeda, al- Nusra, Hamas, and the like for many decades..

Yet the West’s thirst for Saudi, Qatari and Iranian oil and gas blinded them to the atrocities and barbaric nature of the religion of war and destruction. And when Western greed was oiled by Muslim Brotherhood hooked their lies in familiar Western democratic terminologies, the liberals in the US and Europe swallowed the bait.

The question now is how deep has the bait penetrated and whether the West can unhook itself long enough to realize that it’s time to call the enemy by its name everywhere it manifests itself and then take the necessary steps to defeat it, much like Egyptian president Abdel Fattah el-Sisi has been dealing with the Muslim Brotherhood.

Perhaps he can help Obama with a pragmatic strategy to stop the spread of a sect of a barbaric jihadi murderers before it spells over across the ocean.