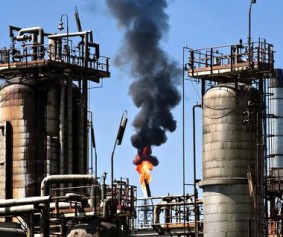 Left: “The number one crude oil exporter, Saudi Arabia, has projected a $39 billion deficit in 2015. The impact of lower oil prices, along with the decision not to cut production, is putting pressure on the country’s finances.”

It is virtually impossible to tell someone that a belief essential to his world view is untrue: it’s invariably necessary to show him. So it is that oil producing nations such as Iran, Russia and Venezuela all believe that the global market price of oil is based upon physical supply and demand.

That conventional view may been briefly shaken when the price collapsed from $147/barrel in July 2008 to $35/barrel in December 2008 while the physical demand for oil varied by no more than 3%. But the subsequent reflation of the price saw producers’ faith in the oil market Gods restored.

Since I predicted the current oil market collapse three years ago, I have not found it easy to explain in simple terms the way in which the oil market has been financialised and has therefore enabled Saudi Arabia and the US between them to ‘peg’ the price at a level comfortable for both.

The Great Transfusion
In 2007/8 a colossal pyramid of US bank debt backed by real property collapsed when the burden of debt became too great for the US population to support. As has been said if debt cannot be paid, then it will not be paid and this debt has not gone away.

The visible wounds of the US economy – the damaged private banks – have now healed through being recapitalized, but invisible internal bleeding continues into unsustainable and repayable property debt. This requires a continuing transfusion of new dollars which have until recently been provided by the US Federal Reserve Bank (‘Fed’) in exchange for financial assets such as government bonds. This Fed economic policy of a program of dollar creation and asset swaps is known as ‘Quantitative Easing’ or QE.

These dollars had to end up somewhere, and apart from conventional investments, new types of funds were created which enabled investors who feared inflation to invest in gold and commodities.

Perhaps the most sought after commodity as a protection against inflation is and was crude oil. A colossal amount of dollar lending – no one knows how much – was therefore made via investment banks to Saudi Arabia, and possibly to other GCC nations, by US funds in return for oil loans made through ‘prepay’ sale and re-purchase agreements.

The Picture Worth a Thousand Words 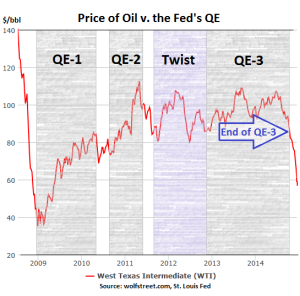 This simple chart shows how the US Fed Quantitative easing (QE) and Twist programs of dollar creation are almost perfectly correlated to the US WTI crude oil benchmark price: itself linked to the Brent/BFOE benchmark oil price.

It is clear that when the QE transfusion ended in late 2014 the US financial bubble in crude oil prices collapsed – as I predicted it would. Another macro-economic effect has been that since the US dollar bleeding continued, the dollar transfusion must necessarily come from somewhere else. We therefore see the dollar exchange rate strengthening as dollars drain out of US creditor nations causing dollar shortages.

But don’t take my word for it; take Mr Al-Naimi’s word.

Mr Al-Naimi recently gave a major interview in relation to Saudi oil market strategy. Perhaps the most widely reported remarks related to the new Saudi strategy of maintaining market share even in the face of a decline in the oil price to $20/barrel.

In my analysis, Mr Al-Naimi’s bullish posture is based upon the fact that Saudi Arabia can maintain market share simply by delivering crude oil into the market the economic value of which has already been pre-sold to investors.

In my view, the most telling – but little reported – comment in the interview is the following, on the question of how Saudi Arabia could withstand low oil prices even whilst experiencing a budgetary deficit:

(Interviewer) But you have announced that you will have a budgetary deficit?

(Al-Naimi) A deficit will occur.

(Interviewer) But what resources do you have in the country?

I believe that Mr Al-Naimi’s confidence is based firmly upon Saudi experience of monetising their reserves invisibly to the market for the last five years.

Through the use of prepay credit the Saudis and US have essentially turned the conventional oil market on its head. Market participants such as Iran, Russia and Venezuela wrongly believe that Saudi Arabia’s oil supply still actively determines the market price. But the reality is that the Saudis are now passively allowing the market price to determine supply.

The market price is in reality now set – based upon an easily manipulated crude oil benchmark price – by financial intermediaries who profit commercially from volatility, on behalf of governments who profit politically from the economic damage caused to producers by massive swings in oil prices.

What may be done about this? As I have pointed out, Low Oil Price: A Window of Opportunity (Tehran Times 24 Dec. 2014) opportunity now exists for introduction of a new market paradigm to be led by producers and consumers acting directly and collaboratively.

* Chris Cook, Director Nordic Enterprise Trust, has been involved in the regulation and development of markets and enterprises for 25 years, including six years as a director of a global energy exchange. In recent years he has been developing new partnership-based enterprise models and related financial products and services.