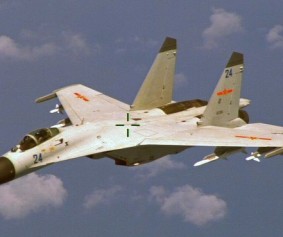 Left: “A Chinese fighter jet that the Obama administration says is similar to that which conducted a “dangerous intercept” of a U.S. Navy surveillance and reconnaissance aircraft off the coast of China in international airspace.Reuters”

Objectivity is one of the greatest assets in any human intellectual encounter. But no concept can be so easily abused in the white heat of crisis. And it can become a false front for a failure to come to grips with the issues at hand. For it can easily metamorphous into the belief that we are able to see beyond the current issues and put them in a broad historical perspective.

That is one of the conceits of the present pseudo-intellectuals of the Obama Administration. The fact is that politicians, even those who graduate to statesmen, are not historians except in some very rare instances. So it is better left to our progeny to determine the longer-term results of the current crises and their outcomes. In terms of national policy, we have enough on our hands in simply meeting the demands of the hour for what clearly can be seen in the here and now as a danger to national security. Even that essential concept is a difficult one to measure at any given moment.

To do otherwise has led, in part, to the current incapacity of American leadership to cope with half a dozen threatening geopolitical disasters around the world. It is expressed in the pomposity of the belief of policymakers in the White House that can always maintain sangfroid above the fray. It leads them to believe that because they all knowing about all the issues, viewed from the perspective of opponents or enemies, they are able to couch compromises, which would satisfy all parties. As a corollary, they see the pursuit of methods of exchanging views, however contradictory and inconclusive, as the end-all of all international relations.

So, instead of devoting all our resources to coordinating our allies in reinforcing the ability of Ukraine to meet continuing Russian aggression, for example, the Obama Administration lectures Vladimir Putin on his failure to understand a new international morality and thereby jeopardizes his role in history. I can’t imagine the master of the Kremlin with all his ambitions and current problems arising from them cares much for this uninvited counsel on his legacy.

Objectivity in formulating a foreign policy requires above all knowing what our own national interests are and pursuing them to the full extent possible. True, that is easier said than done. But it is the height of arrogance – and stupidity – to believe that one knows the irreconcilable interests of both parties to a dispute; it is more than enough to have clearly defined and registered our own.

So when an Obama Administration spokesman at the highest level of the national Security Council publicly presents the U.S. complaints of a near collision by a Chinese fighter and an American surveillance aircraft, he must present Washington’s case. . [Never mind that the highly sensitive role of State Department spokesman permanently has been turned over to an Obama political campaign hack.] To natter on about the on-again off-again of Washington’s longtime pursuit of direct military to military communication as a principle issue in the affair is to miss its essence. It is less than clear that a military “hot line” could have prevented the episode or ameliorated it after it took place

The incident took place over international waters. The American aircraft was within its rights to make observations of the region, including those of Chinese military operations. The Chinese fighter plane pilot risked the lives of himself and the U.S. crew by coming within yards of the U.S. aircraft. His “barrel roll” over the American plane, apparently intended to show he was carrying missiles, was an adolescent antic. Those were the points that had to be made in any public statement, presumably and hopefully reflecting what had been said in a diplomatic note to the Chinese.

The Chinese leadership and the general public might also have been reminded that a similar episode which took place in the same general region on April 1, 2001, resulting in the death of the Chinese fight pilot and a forced landing on Chinese territory of the American plane. Given all these facts, it is unlikely American intelligence knows whether the Chinese pilot was a “rogue” or operating on instructions from the highest Red Army military command. And so instantaneous communication between the highest U.S. and Chinese military echelons is totally irrelevant to the event. And, in fact, it is another demonstration that the Obama Administration’s constant search for “modalities” is a preoccupation that ignores the country’s basic interests.

Over and over again, it leads the Obama Administration into diplomatic disasters. Only this kind of reasoning, warped as it is by egos larger than knowledge, could lead the American self-appointed negotiators into equating the roles of Israel and Hamas in the current warfare. When Sec. of State John Kerry proposed that Turkey and Qatar be the intermediaries, he not only exposed this falsity of moral equivalence, but he blew himself and his role up. That was Qatar whose feudal dictator poured tens of millions into Hamas’ tunnels to penetrate Israel defenses or Turkey which cultivates the generally acknowledge terrorists of Hamas.

Even an Israeli Establishment never far from having to acknowledge publicly and privately its dependence on U.S. support in a region surrounded by its enemies, had no choice but to come down with an emphatic “no”. The negotiations were returned to Egypt’s military – which Kerry has continued to insult with his courtship of the Moslem Brotherhood, even though U.S. military and economic aid continues to the Cairo regime. That Kerry [and presumably his boss The President] did not realize they were walking into a blank wall could only come from their distorted concept of an all-knowing “objectivity” that can manage any situation.

We must take positions. Our weakness in the West is born of the fact of so-called ‘objectivity.’ Objectivity does not exist – it cannot exist!… The word is a hypocrisy which is sustained by the lie that the truth stays in the middle. No, sir: Sometimes truth stays on one side only. Oriana Fallaci

* A version of this column will appear on yeoldecrabb.com on Monday, August 25, 2014