“Anti-Semitism is a Huge Menace” – The Netherlands Chief Rabbi 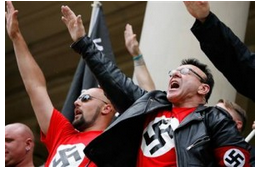 “The growing wave of anti-Semitism in Holland forces Jews  to be careful and hide any symbol that would give away their identity.”

“I don’t think anti-Semitism is growing in the Netherlands. It is just getting more visible now on a daily basis. Twenty or forty years ago it never happened that people call me ‘a dirty Jew,’ but today it’s normal, it happens frequently. It’s not safe for me to take the train, especially in the evening,” says Chief Rabbi Binyomin Jacobs, in this exclusive interview.

“It’s too easy to put the blame on Muslim immigrants only, but I believe that native Dutch people are also susceptible to anti-Semitism.”

The Rabbi noted that people from the region surrounding the Mediterranean Sea, such as Moroccans and Tunisians are more spontaneous in their behavior and expressions, he said. “And it is quite risky to wear a yarmulke and walk in neighborhoods where lots of Muslims are living.” The Rabbi pointed out, “Arabs can walk around freely in Israel, and that’s great, of course! But if I would put one step in Gaza, I can guarantee you that they will kill me instantly.”

“I still remember that Moroccan boy in Holland who was scared of me because I was a Jew. His parents had told him that the Jews – that’s me! – want to tear out his eyes to the benefit of a blind Jewish child. On another occasion I visited a kids playground and noticed children running away from me. They were scared of me because they were told at home that Jews and Israel were bad.”

Rabbi Jacobs is deeply worried about the growing acceptance of anti-Semitism in Dutch schools, particularly in big and multicultural cities.

“If a teacher suspects that a child is being abused or hit by his parents, there is a protocol for addressing this problem; a doctor and the social worker arrive to talk to the parents, and if the parents refuse their advise they’ll be in trouble. But if a child in school talks about dirty Jews, or says: “All the Jews should be killed,” nothing happens! Nobody cares about it. Even if the teacher is shocked, he won’t do anything about it. And that’s very dangerous, because this child will be brought up with the idea that Jews have to be killed.”

“Attitudes must be changed first, through proper education,” says the Rabbi. Indeed, a roundtable discussion about Holocaust education held in the Dutch parliament this week, revealed a growing trend to stop teaching about the Holocaust.

There are schools where teachers are scared to teach about Holocaust because either Muslim parents who are Holocaust deniers, object such teaching, or the older Muslim students respond aggressively.

“The Dutch government’s education authorities are very strict when finding out that not enough math classes were taught. But if a teacher is too scared to teach about the Holocaust, then nothing is being done about it! I just don’t understand this,” Rabbi Jacobs says in frustration.

Rabbi Jacobs added, “Protecting Jewish buildings, schools and homes is important, but not enough, because that only deals with the symptoms and does not solve the problem. What is needed above all is proper education!”

The Rabbi went on to note that the Dutch immigration policy demands that those who ask to acquire Dutch nationality, are required to learn the language, know the Dutch national anthem and Dutch history. “Yet, they are not required to accept the multicultural society, thus accept that people in Holland are allowed to live the way they want to live. They have to accept that each person has the right to live his own life. They are fully entitled to convince other people to adopt their own way of living, but they cannot use violence and intimidation by saying: “He is not allowed to live anymore because of the way he lives.”

Rabbi Jacobs then went on to describe how the owner of Ome Joop’s Tour, a biking-tour organization for kids from lower class families in the city of Arnhem, was shocked when he learned that young Dutch–Turkish Muslims said Hitler had failed to kill all the Jews and wanted another Holocaust.

In July 2013, he arranged for 144 teen-agers a visit to Westerbork, the former transit camp through which the Nazis deported more than 100,000 Dutch Jews to the death camps of Auschwitz and Sobibor – among them a teen-age girl named Anne Frank.

“I showed the camp to this multicultural group of Muslims, non-Muslims, blacks and whites, who knew nothing about the Holocaust.”

“They all put their roses down at the monument. And I had a conversation with them. I explained to them what happened here on this spot, how the Jews were deported to the death camps and killed, and that the Nazis had killed lots of children. I explained to them that it could happen again. “No, never!” they said. But I told them, “Yes, yes, it could!” There was a real discussion about this. We held one minute of silence at the end.”

“The children were so upset that it took at least an hour to calm them down. This was something they had never heard about before and it made a deep impression on them. Those children will never become anti-Semites. I’m convinced about that!”

The Rabbi said he plans to lead another group of 140 children later this year in visit to Vught, the former Dutch Nazi concentration camp.

After showing them around the camp he plans to end the visit at the Children’s Memorial. There, each visitor will read out loud ten or fifteen names of the 1,269 Jewish children who were deported from Vught to the extermination camps in 1943, and lay flowers at the foot of the monument. The Rabbi  hopes, “that by learning what happened there, these children also will never become anti-Semites.”

Rabbi Jacobs who born in 1949 in Amsterdam, went on to study in Paris, Brooklyn and Israel and in 1975 returned to the Netherlands where members of his family lived since 1400. In addition to serving as the Chief Rabbi of the Interprovinciaal Opperrabbinaat, as chairman of the Rabbinical Council for the Netherlands and the board of the RCE (the Rabbinical Centre of Europe), he is also the chaplain of the Sinai Centre in Amstelveen, the only Jewish psychiatric hospital in Europe. Rabbi Jacobs belongs to the orthodox Jewish Chassidic movement, Chabad,

In 2010, a stone shattered a window of his home at a multicultural neighborhood of Amersfoort, an old town in the center of the Netherlands. In July 2014, days after Israel begun responding to Hamas rockets attacks, four bricks were hurled through his home windows. The perpetrators have never been found, but now a tall fence and security cameras protect Rabbi Jacob’s home.

* Emerson Vermaat is a journalist and writer in the Netherlands, interviewed Rabbi Jacobs earlier this week. Mr. Vermaat publications include books on Auschwitz and the Nazi Einsatzgruppen (“Operational Groups”).