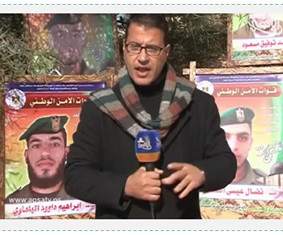 Left: Hamas-affiliated Al-Aqsa TV commentator reports on the graduation exercises of the national security forces’ officers’ training course. In the background on the left is a poster of Ibrahim Daoud al-Bala’wi, a national security force operative who also belonged to the Izz al-Din al-Qassam Brigades and was killed in Operation Protective Edge.

For now, the Arabs living in Judea and  Samaria and Arab coalition bid for a Palestinian State was defeated at the United Nations Security Council. Australia and the United States opposed the bid and five other members abstained, including the United Kingdom.

However, eight other members, including France, China, Russia, Luxembourg  and Jordan supported the bid. Why? Why support the establishment of a terrorist state?

The French apparently experienced an “urgent need to act,” and were disappointed when their hazardous action failed and urged the Council “to try again, before it’s too late.”

US Ambassador Samantha Power’s explanation of the U.S. “no” vote failed to acknowledge the Palestinian terrorism against Israel. “We voted against it because…peace must come from hard compromises that occur at the negotiating table.”

Perhaps she missed the latest report by the Meir Amit Intelligence and Terrorism Information Center on the Palestinian national security forces’ cooperation with Hamas. The report explains:

When the Palestinian national consensus government was established the national security forces officially became subordinate to the Palestinian ministry of the interior in Ramallah. However, their subordination exists only in theory. In reality, Hamas continues to control the national security forces and uses them for military purposes. That can be seen by the fact that the three senior commanders who participated in the graduation exercises were all appointed to office by the de facto Hamas administration before the establishment of the national consensus government. One of them, Hussein Abu A’dhra, (commander of the internal security forces in the Gaza Strip), who briefed the graduating operatives on simulating the attack on an IDF post, was dismissed by Mahmoud Abbas and stripped of his rank (because of blunders he made during the Hamas putsch of the Gaza Strip in June 2007).

There are Izz al-Din al-Qassam Brigades terrorist operatives who double as operatives in the national security forces and in other internal security networks in the Gaza Strip. Proof can be found on lists of those killed in Operation Protective Edge and other past events. Double identities allow Hamas to employ military-terrorist operatives in its security forces, give them governmental “legitimacy,” and pay their salaries with funds earmarked for members of the internal security networks in the Gaza Strip. 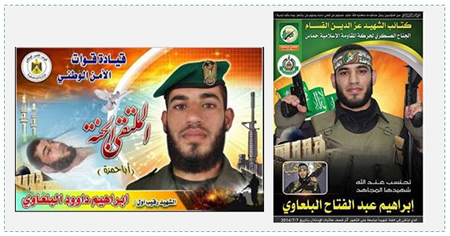 *This is an excerpt from “Hamas’ Izz al-Din al-Qassam Brigades and National Security Forces Exercises Simulate Takeover of IDF Posts near Gaza Strip and Abduction of Soldiers” published by The Meir Amit Intelligence and Terrorism Information Center on December 29th, 2014.