The Muslim Brotherhood at Work: Tunisia 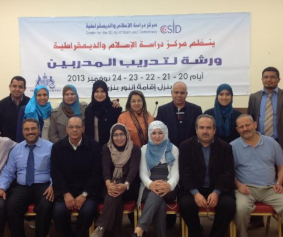 The Muslim Brotherhood’s modus operandi of corrupting the meaning of political democracy is like bacteria that festers from a wound to spread the contamination. A good example of how it works may be found in the recent activities of the Tunisian branch of the Muslim Brotherhood’s Center for the Study of Islam & Democracy.

The group that founded the CSID in 1999 was made of members of the American Muslim Council. Using Western terminology, they established this Muslim organization that advances sharia, masking it by misusing Western terminology associated with free democratic political ideology.  Visitors to its website are encouraged to read the writing of the Muslim Brotherhood’s “intellectual godfather” Sayyd Qutb, on “Jihad and Mission.”

These days Tunisia’s CSID is in a frenzy to assure the Muslim Brotherhood’s grip in the forthcoming elections.  Recent activities included The National Forum on Activating and Constitutionalizing Transitional Justice, where speakers addressed “the Law of the Immunization of the Revolution,” urging the passage of the law “before the transition to theDemocratic Building.” One speaker even argued that the French, American, Russian, Chinese, Iranian, and Eastern European (1990s) revolutions similarly “immunized themselves” from opposition “until the success of the Democratic Transition is achieved, away from political considerations, as pretended by those opposing this law.”

Another speaker, described as “a lawyer and a Human Rights Activist,” spoke on the “Reasons and Necessities and Risks of the Law of the Political Immunization of the Revolution,” similarly argued “that the Law of Political Exclusion is a preventive procedure that normally follows most revolutions worldwide.”

Below is the description of the Tunisian CSID’s recent Training Workshop For Training Facilitators, from the website.

In the framework of consolidating the culture of citizenship, democracy education, managing dissimilarity, and effectively contributing to the success of Democratic Transition, the Center for the Study of Islam and Democracy (CSID) organized a training workshop for training facilitators.

The workshop was launched on Wednesday at 9 a.m. by welcoming the participants and introducing the Center for the Study of Islam and Democracy (CSID), the workshop and its objectives, the proficiencies that the trainer needs in order to inform about the content and to convey the citizenship skills to ensure the success of the Democratic Transition experiment.

During the first two days (Wednesday and Thursday), it an occasion to remind of the Six Articles of the book Islam and Democracy: towards an Effective Citizenship through an exercise from each Article in different strategies:

* Article One: “What is Democracy”: Democracy Tree and the Principles of Democracy exercises.

* Article Four: “Human Rights and the Dispute between Rights” in the manner of ‘Take a Position.’

*Article Six: “Citizenship”: an Exercise about the Rightly Guided Governing in the manner of ‘Negotiation.’

Furthermore, some theoretical lessons were presented concerning the skills of a successful trainer, the manner of designing a course, the ways of concentration and communication skills.

The second day ended up at 11:30 p.m. by dividing the participants into six groups; each group assumes to explain two educational strategies. The groups were divided as follows:

*First Group: Bouraoui Hashous and Ichrak Ben Hamouda: the strategies of “Take a Decision” and “the Robin Circle.”

*Second Group: Bouthaina Ouergui and Moez Rezgui: the strategies of “think, Pair and Share” and “an Organized Academic Debate.”

*Third Group: Saleh Hachem and Hamadi Chbili: the strategies of “the Virtual Death Court” and “the Constitutional Court Deliberations.”

*Fourth Group: Fatma Toumi and Fariha Toumia: the strategies of “Small Trial” and “Each one Teaches the Other.”

*Fifth Group: Adel Hfayeth and Fatma Ouederni: the strategies of “Representation of scenes and Simulation” and “Negotiations.”

*Sixth Group: Maher Mazhoudi and Samia Sayes: the strategies of “Creativity” and “a Parliamentary Session.”

During the fourth day, each group was given the opportunity to practice training for an hour and a half through providing each group with an exercise from each Article.

*Group One: an exercise from the first Article “What is Democracy?”

*Group Two: an exercise from the second Article “How the State Functions?”

*Group Three: an exercise from the third Article “Corruption and Power Abuse”

*Group Four: an exercise from the fourth Article “Human Rights”

*Group Five: an exercise from the fifth Article “Elections”

Each exercise was followed by an oral and a written report. The fourth day ended up at eleven and a half in the evening.

In the fifth day, Group Six presented an exercise from the sixth Article “Citizenship.” The formation session was concluded by an oral and a written evaluation concerning the workshop content as well as the residence condition. Afterwards, the certificates were distributed to the participants. It was on Sunday, November 24, 2013 at the Nour Residence Hotel, Bizerte (2:30 p.m).

The workshop was marked by a significant interaction among the participants who collectively expressed their enthusiasm and their willingness to participate in other formation courses organized by the Center. They conveyed their desire to work on disseminating the spirit of Citizenship in the regions and at the associations for the sake of contributing to the success of the Democratic Transition and consolidating the culture of dialogue and peaceful coexistence for the state’s interest.