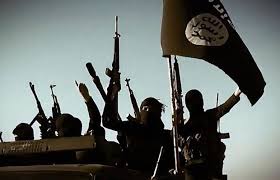 In the Fall of 2010, liberals in many Middle Eastern countries wanted a ”Color Revolution,” like other countries had in the previous decade. Yet, in the Fall of 2014, the dominant color that splashes all over is black. The black color of the growing jihadist movement, the ISIL.

But in the Fall of 2010, Iraq had a new government in place. The Iraqis were still proud of their 2005 referendum of a free people–men and women of every sect and faith–who then, for the first time voted for their constitutionally elected government and raised a purple finger, as a symbol of what they called the The Purple Revolution.

In the Fall of 2010, Dubai was the center of the universe with Doha trying desperately to catch up.  Riyadh was in the middle of one of its transformations.  And Egypt, my U.S. diplomat host was disappointed that Cairo was not a challenging post, as Baghdad had been! But the burgeoning youth, connected to the world through their smart phones, seemed increasingly restless, and a liberal class was unhappy with their presidents-for-life and the stiflingly corrupt bureaucracy.

Almost everyone was happy that Iraq was off the radar. In fact, many openly stated they wanted what the U.S. had established there, or at least for the U.S. to spend the same kinds of money and efforts on civil society and building open markets in the rest of the region.

I returned to Saudi Arabia where they ridiculed our anti-Bush president and his pseudo-Islamic credentials, and all was good. The Middle East seemed so quiet that Obama talked openly about ending the war in Iraq–a Win, according to his administration, with lots of platitudes to our boys and girls in uniform–so he could turn to more pressing matters like socializing healthcare and solving global warming.

The spoiler was an under-employed Tunisian vegetable salesman.  Harassed by a policewoman for having an unlicensed business in a country as Western as you get in the Arab world, he protested by setting himself on fire, an almost unheard of form of civil protest in that part of the world. And the flames spread quickly.  This was the time for a liberal and progressive American president to seize the moment and support those who sought reform in the corrupt Arab world. Yet he paid them lip service and allowed the Muslim Brotherhood to “help organize” the massive demonstrations of tens of thousands of 16-30 year-olds, most with a totally antithetical worldview. The moderate “Arab Center” has not recovered.

As 2011 progressed we all watched as one dictator after another fell. The corrupt Ben Ali fled Tunisia as the French turned their backs on his kleptocracy.  Algeria, Jordan and Oman changed cabinets or announced immediate reforms saving them from a similar fate. Mubarak was deposed, jailed and even prosecuted on TV!  King Abdullah of Saudi Arabia returned home from Morocco, handing out billions of dollars to keep the young liberals and ever-menacing tribals happy–while spending billions more on development that was said to provide jobs to more than 1 million unemployed Saudis, and massive amounts on internal security and greater state control of the media. The civil unrest in Bahrain scared the rest of Gulf Arabs, and they sent troops to brutally quell the Shia uprising. This led to a temporary arms embargo from European countries, but tellingly not the US.  The obvious reason was the need to protect the American Navy base in Bahrain, but also to keep up the sale of American weapons to the region.

Meanwhile Yemen’s 33-year President Saleh barely survived a massive bomb attack on his palace, only to be deposed, while a reinvigorated al-Qaeda in the Arabian Peninsula increased its attacks also in Iraq.  In fact, any casual observer would have known of the increasingly dictatorial behavior of Maliki and his Iranian-supported Da’wa party.  In February 2011, he announced he would not seek a third term, a concession he later hoped the world had forgotten. Meanwhile, the two other regional dictators, Libya’s Muammar Qaddafi and Syria’s Bashar Assad were facing uprisings. For years we heard: “Do not mess with Syria as it will be a quagmire worse than Iraq.”  I heard it after visiting al-Qaim in 2005, when the U.S. Marines were desperate for support to eliminate the jihadist rat lines that ran down the Euphrates river valley from Syria all the way to the Sunni Triangle.  And while we helped to dislodge Qaddafi, the President declared it was a NATO victory.  But not before we ensured all those Qaddafi Family Office billions around the world were placed in receivership. (Where are they now as Libya becomes a failed state?). America’s involvement faded into an arms re-purchasing program for export to Syrian “moderate” rebels–an arrangement that ended in a disgraceful disaster. Syria, in the meantime, went from bad to worse.

In the midst of all of this chaos, Obama exited Iraq by the end of 2011, primarily to fulfill a campaign promise as he geared up for reelection.  ISIS (ISIS, IQ, ISIL…Da’esh, by its Arabic acronym), an al-Qaeda branch present in Iraq from the earliest days of the insurgency, massively increased its attacks within Iraq, literally from the date of our departure, and by the end of 2013, raised their black flag in Ramadi and Fallujah.

All of the worst actors began to gather on the borders of Mesopotamia, where Iran had been increasingly calling the shots, with the notable exception of oil-rich and American-protected (non-Arab and largely secular Muslim) Kurdistan.

The Arab youth and disaffected Muslims from around the world finally had the opportunity themselves to put videos like those they had been watching on YouTube. Twitter and other social media outlets sprung into action.  The Islamist ideologues welcomed the new jihadist recruits and sent them off to battle. The funding, literally billions of dollars, has been supplied by wealthy Arabs in Kuwait, Jeddah, Riyadh, Dubai, Abu Dhabi and Doha…from other Muslim countries and the global Arab/Muslim diaspora.

This is the Middle East our soldiers now find as they return once again to insert themselves in the middle of a series of concentric circles of a religious war: Sunni vs. Shia, secular vs. Islamist, Muslim vs. apostate, rich Gulf Arabs vs. the Arab Street.

In the Fall of 2010 the Arab World was at a crucial tipping point. Like it or not: America’s commitment, or lack thereof, then and now would determine whether black will become the dominant color throughout the Middle East.

* Mark Burr is a former reconstruction adviser in Iraq and a businessman with over 20 years experience in the Middle East.