The Media & The Muslim Brotherhood 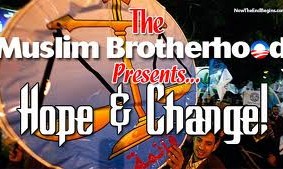 Western media coverage of Egyptian politics seems to focus almost entirely on the depredations of the military-backed interim government, with a strong residue of sympathy for the Muslim Brotherhood. There is no mention of the Brotherhood’s totalitarian and terrorist agenda.

Reuters‘ February 1, 2014, coverage of Mohammed Morsi’s trial, is a good example: ”Egypt court adjourns Mursi trial over protester deaths” read the headline. However, the postponement occurred, as the reader finds out in the sixth paragraph, ”to allow for further examination of video footage showing clashes between pro- and anti-Mursi protesters which may be linked to the case.”

Egypt’s designation of the Muslim Brotherhood (Ikhwan) as a terrorist organization last November is perceived merely as a political ploy, while reports on links between the MB and terrorist groups, including al-Qaeda, are limited to individuals, but not to the organization itself. Brotherhood denunciations of the U.S. and the West are still taken as holdovers from a general resentment among Egyptians and Middle Easterners in general for U.S. support of the Mubarak regime in Egypt and of Israel.

The Obama administration has aided and abetted the media in this by only criticizing the military for cracking down on the Brothers, withholding aid and insisting the Islamists be included in the political process.  The administration ignores the fact that the MB supports terrorism and is a menace wherever it exists, especially in Egypt, where its popularity has drastically declined.

While the Brothers are no longer in power, if allowed, they will continue to cause trouble. Gamal Abdel Nasser’s attack on the MB did not end their activities. He was able to take over Egypt only when he crushed the Ikhwan in 1964-66.

The MB international headquarters has been moved from Cairo to the Cricklewood area of northwest London, in a flat above a closed kebab shop. While reports on this make the MB seem pathetic, they neglect the fact that the Brothers are still alive and well in Qatar and Turkey and all across North Africa.  Brotherhood “educational” and propaganda operations also proceed uninterrupted in Europe, North America, Australia and elsewhere.

If the media and the U.S. administration can be blamed for failing to take the Brotherhood for what it is, that blame can also be laid at the feet of mainstream Middle East “experts,” who can’t seem to shake the notion that Islamists must be embraced and accommodated to create peace and order in the region.

On January 10, Daniel Byman and Tamara Cofman Wittes of the Brookings Institution’s Saban Center published a lengthy op/ed entitled “Now that the Muslim Brotherhood is declared a terrorist group, it just might become one.” The article’s naiveté is breathtaking. The piece ends with this:

“Finally, the administration should press the Egyptian government to release from prison Islamist politicians who commit to nonviolence and to allow parties with a range of Islamist views to organize and compete in elections.

“The Brotherhood might become only a shadow of its former self. But without some peaceful means to participate in shaping their country’s future, the millions of Egyptians who support the Brotherhood may feel no stake in sustaining that future, and some will seek instead to tear it down.”

Byman and Wittes have seemingly missed a good deal of the news, probably taking the fact that the Brotherhood hasn’t announced armed jihad publicly to mean something. They failed to mention the affiliation between terrorist groups, such as Ajnad Misr (“Egypt’s Soldiers”), that attack police stations and personnel and the MB. Likewise, nothing is said about the MB’s promotion of anti-government terrorism in the Sinai.

While a direct link between the Brotherhood and the al-Qaeda affiliate Ansar Beyt al-Maqdis (ABM) hasn’t been established, the group’s operations have expanded from the Sinai to west of the Suez Canal and into Cairo.  It was ABM’s downing of an Egyptian army helicopter with a shoulder-fired missile (MANPAD) on January 27 that got noticed internationally. It was Gen. David Petraeus, the former CIA director, who called the action “a big deal” because terrorists armed with MANPADs can bring down an civilian airliner. But nothing was heard from official Washington.

Like Ajnad Misr, ABM has been targeting police and soldiers in “revenge for the security forces’ suppression of Islamist dissidents following Morsi’s ouster, and the army’s ongoing counter-insurgency in Sinai.”

Last September they attempted to kill Egypt’s police minister. In November they assassinated a senior secret policeman, and in December they killed a dozen policemen at a security headquarters in northern Egypt, and they have also set off a massive car bomb outside police headquarters in Cairo.

It is naive in the extreme to assume that the Brotherhood will fade away if people like Gen. Sisi just leave it alone. Byman and Wittes argue that the persecution of the MB in Egypt will make Hamas a more obstructionist and dangerous force in the region. However, one of the charges against Morsi is that he conspired with Hamas.

Not surprisingly, the interim government actions against the Gaza-based MB branch included the closing the Rafah border crossing and the destruction of tunnels. Egypt has also beentalking with Fatah about working together to wean Gazans away from Hamas.

The Ikhwan and Morsi were doomed the moment that Gen. Sisi led the military counter-attack, and it doesn’t matter one nickel what Obama, his Secretary of State, John Kerry, or the U.S. and Western media say.