The Jerusalem of Science and Culture 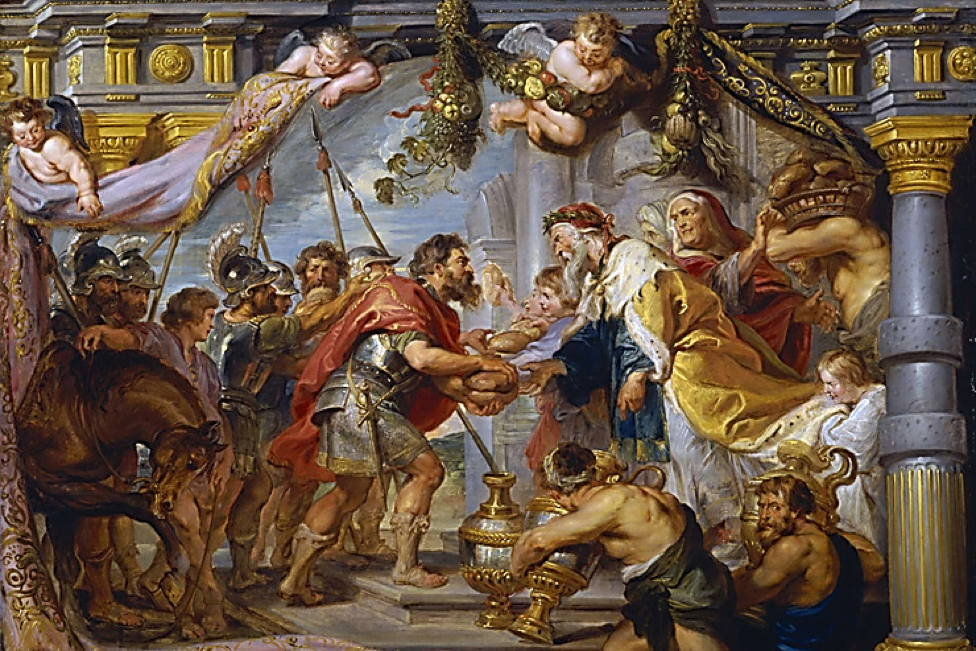 On October 12, 2016, the United Nations Education, Science, and Culture Organization, commonly known as UNESCO, adopted a resolution that snubbed Jewish ties to the Temple Mount by referring to in the resolution exclusively by its Arabic name. As described by the UK Guardian, (and echoed by many other newspapers including the Boston Globe): “ UNESCO’s tendentious semantics play into an ongoing propaganda campaign by the Palestinian Authority to “de-Judaize” the identity of Jerusalem, the foremost Jewish city on earth. UNESCO erred by allowing itself to be dragged into this controversy.”

It is no surprise that the resolution passed: The resolution, proposed by Algeria, Egypt, Lebanon, Morocco, Oman, Qatar and Sudan passed with 24 of the 56 members governing council voting for it, six against and 26 abstentions. Of the 24 who favored the motion, at least 9 (more than a third) have heavily Muslim ties.

What is surprising, however, is that UNESCO would violate its charter and raison d’etre to wade into the political fray, that it would allow itself to be hijacked by the current prevalence of Arab states on its governing board to self-immolate — and that it that it deliberately fostered international dissension by enacting a resolution in direct contravention of one of its enumerated goals. What is sad is that UNESCO would abandon its designated mission of impartiality and wade into the political turf. And what is disappointing is the rather impoverished, pedantic and pedestrian Israeli response.

As its name implies, UNESCO is charged with employing scientific, cultural and educational initiatives as a means to bridge divides, “to contribute to peace and security by promoting international collaboration” in these areas — rather than create them. Specifically, it is charged with (inter alia) the promotion of cultural diversity, translations of world literature, international cooperation agreements to secure the world cultural and natural heritage (World Heritage Sites).

Immediately after the vote, Israel’s ambassador to UNESCO criticized the committee’s stance, predictably arguing that: “You have just adopted a [resolution] against historical truth and one that stands in complete and utter contradiction to all values,” without further amplification. In response, Palestinian officials insisted that because the resolution refers to issues at Muslim places of worship, it justified the language.

It must be noted that the Palestinian response reflects the current state of affairs and ignores the historical or cultural associations of the site. It reflects, in essence, a snapshot in time, ignorant or irreverent of the past or possible future. Language can be polarizing –as occurred here. The fact that the locus under discussion houses Muslim places of worship is part of the conundrum. Stating that this fact justifies the use of the language is, of course, a bootstrap argument. Many Jews (and Christians) would like to see the Temple Mount as available to them as a prayer site, as in fact was the situation centuries ago.  As The Economist explains in The trouble at Temple Mount:  Nov 17th, 2016: by A.L.G. “Ultimately the right to pray implies a right of ownership.” But perhaps The Economist got it wrong; perhaps the right of ownership implies the right to pray – and it is for this reason the Palestinians are so intent on creating the aura of ownership – to guarantee their right to prayer at their third holiest site – denying Jewish worshippers the right to pray at their holiest of sites.

Nevertheless, what is truly troubling is that the scientific and cultural legs of the organization were amputated. When deciding how to refer to the site – would it not have been important to see how scientists and cultural icons referred to and regarded the site? Before a country casts a vote, should they not have enquired how their own luminaries and heroes saw the site- from a historical vantage point? In that designating “world heritage sites” are part of the organization’s mandate – isn’t the world heritage of the Temple Mount a consideration to be used in constructing the language of the resolution?

So what, indeed, would the great scientists and cultural icons have said?

Of course, Albert Einstein (invited to be President of Israel and instrumental in the founding of the Hebrew University of Jerusalem to which he willed his literary assets) and Aaron Aaronsohn (the discoverer of primordial wheat) would have been shocked. Both were avowed Zionists, and both were instrumental in the founding of the Jewish state with Jerusalem as its capital. But of course, both Einstein and Aaronsohn were Jews and hence must have been biased and their sentiments discounted, right? (An anti-Semitic comment, perhaps, but then, isn’t anti-Semitism the root of the issue)?

So let’s look at “unbiased” cultural and scientific icons as the figured through history, and determine their views of the Temple Mount. Let us recall that the “liturgy,” “lore” and tenets of Freemasonry rest in large measure on veneration of Solomon’s Temple on the Temple Mount –never referred to by any Arabic name. Let us examine see has who pledged allegiance to Freemasonry and embraced its tenets –venerating the notion of Solomon’s Temple being built on the Temple Mount.  In fact, many countries who voted for the resolution or abstained boasted luminaries who were Freemasons: (Freemasonry emphasizes the metaphorical Temple of Solomon, and concentrates on the symbolic aspects of its physical construction relying on Biblical Sources, teachings from Templars from ca. 1446 AD and Kabbalistic writings).

Arabs of Muslim belief who were Freemasons:

(Algeria voted for the resolution)

(Egypt voted for the resolution)

Süleyman Demirel, 9th President of the Republic of Turkey.

Philosophers who were Freemasons: Marquis de Condorcet, the mathematician, and philosopher; Denis Diderot. And Voltaire. Three of the greatest philosophers were French Freemasons, yet France abstained in voting.

The American Experience with Freemasonry

The American association with Freemasonry (The United States voted against the resolution) is exemplified by its eleven Freemason Presidents (including George Washington), along with high level court justices (including the first Chief Justice of the Supreme Court John Jay, and Supreme Court Justice Thurgood Marshall). Jesse Jackson, John Hancock, and Paul Revere were Freemasons.  Benjamin Franklin, also a Freemason, arguably the most famous scientist of his day and the father of the importance of science in diplomacy, proposed that the national insignia of America contain the Israelites’ exodus from Egypt. These luminaries would have been appalled to see reference to the Temple Mount and its Jewish roots expunged by referring to the site solely in Arabic terms.

Jerusalem of Science and Culture

But the connection between culture and science and the Temple Mount is even more graphic and runs deeper. Solomon’s Temple and the Jewish ties to Jerusalem have been a favored theme among the most prominent of artists: The UNESCO resolution not only denies the Jewish ties to the site, but also the cultural connection as existed through our collective artistic heritage: 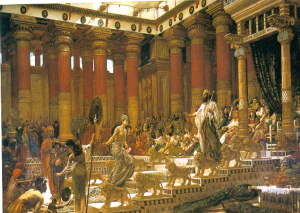 Destruction of the Temple of Jerusalem, by Francesco Haye (1867) 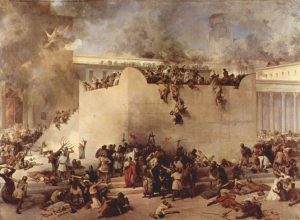 Not only did the artistic community venerate the Jewish ties to the Temple and to Jerusalem (the incident depicted in Rubens portrait of Abraham being welcomed by Malkitzedek as described in Genesis, reveals Malkitzedek as the King of Salem (renamed Jerusalem by Abraham after the Sacrifice). True, Abraham is the father of both the Islamic and Jewish traditions – but then shouldn’t the resolution have reflected this?

The view of the Scientific Icons

And what of the scientific community?  What was their view? At least five of our greatest scientists were Freemasons. And perhaps one can discount the views of Albert Einstein, arguably the greatest scientist of all time, under a prejudicial construct of his Jewish roots. But what about the other candidate for the “Greatest Scientist of All Time” – Sir Isaac Newton.

As described by Laurence Gardner The Shadow of Solomon: The Lost Secret of the Freemasons Revealed (2007) and Stephen Snobelen, A time and times and the dividing of time: Isaac Newton, the Apocalypse and A.D. 2060, The Canadian Journal of History. pp. 537–551, Newton’s views of the Temple Mount, both past and future, are well-documented. His depiction of the Temple of Solomon takes its cues from the prophetic Book of Ezekiel. In his Chronology of Ancient Kingdoms Amended, (London 1728) Newton devotes an entire chapter to the subject and diagrams part of “the Temple of Solomon”  (and not the Temple of the Muslims). Newton believed that the Temple was designed by King Solomon with privileged eyes and divine guidance and represented a sublime mathematical blueprint, as well as providing a time-frame chronology of Hebrew history. 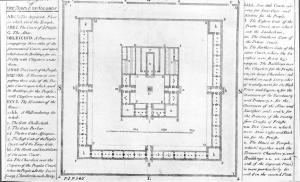 Diagram of Sir Isaac Newton of the Temple Mount; the specifications are drawn from the prophetic book of Ezekiel. This representation is of the Third Temple – the Temple of the Messianic Future as can be seen but the depiction below: 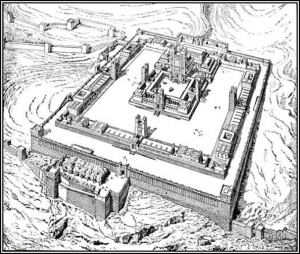 As described by Kelly J. Whitmer, there were at least three large-scale wooden models of Solomon’s Temple publicly exhibited between 1660 and 1730 in several Northern European cities, including Hamburg, Amsterdam, London and Halle- facts which the UNESCO resolution ignores.

And as to the recent exhibit at the Max Planck Institute,  entitled  Solomon’s Temple models as scientific objects (MAX-PLANCK-INSTITUT FÜR WISSENSCHAFTSGESCHICHTE Max Planck Institute for the History of Science https://www.mpiwg-berlin.mpg.de/de/node/9283), the UNESCO resolution is simply an insult to an important and venerated scientific establishment.

In its quest to bend to the political muscle of a plurality of its members, UNESCO abandoned its roots, insulted its icons, and made a mockery of science history and cultural heritage. There is more here at stake than simply ratifying the Jewish passion and claim to its holiest of sites. There is a duty to reflect an everlasting Truth, Truth as exhibited through the ages, through history (e.g., the Templars renditions) and not bend to the current whims of some heavy-handed political strong arms.

previous post US Ground Troops for Syria: A Really Bad Idea
next post The Anti-Trump Movement and The Blind Sheikh’s Legacy
Back to top
mobile desktop