The Israeli Answer to Shoulder-Launched Missiles* 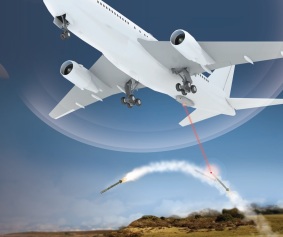 The System and Its Modus Operandi

The process of equipping the aircraft used by the Israeli airlines with systems that protect them from shoulder launched missiles is on track.

Following a successful ground test earlier this year, in addition to processing the data collected from a system that has been installed on an EL AL passenger aircraft, the “green light” was given for the installation of the series production systems.

The installation was approved by the Israeli civil aviation authority (CAA) and is being performed by Israel Aerospace Industries (IAI).

According to the Israeli company, these systems integrate advanced fiber laser technology together with a high rate thermal camera and a small, highly dynamic mirror turret to provide effective, reliable and affordable protection to all types of aircraft and under all operational conditions.

The initial detection of incoming threats is provided by a missile warning system.   When a threatening missile is detected, the warning is passed to the DIRCM which then directs a thermal tracker to acquire and track the threat. A powerful laser beam is then fired accurately at the missile causing it to be deflected away from the aircraft.

The final test proved that the Elbit systems “Sky Shield” system can protect aircraft from the threat of shoulder launched missiles.

The technological achievement is outstanding but at the same time Israeli politicians have proven once again that they are living in a parallel universe where decisions are made by a certain pace – not necessarily one that fits actual reality.

What Took So Long?

The slow, very slow, handling of a super imminent threat has been going on for years and has been shared by several Israeli governments.

The Israel’s State Comptroller already investigated this issue back in 2011, asking why Israeli passenger planes haven’t been equipped with missile defense systems –nine years after the government approved the plan.

Seven years ago, pilots working for the three Israeli airlines warned then-Minister of Transportation Shaul Mofaz that the situation is a prescription for a “Fiasco”.

Back in November 2002, terrorists tried to bring down an Arkia airline plane as it took off from Mombasa Airport. Their rockets missed, however, and the disaster was averted.

The severity of the threat couldn’t overcome the various obstacles, mostly budgetary concerns, which prevented the installation of a defense system on all Israeli passenger planes. There were problems, but if anyone had been seriously meaning to do something about it the problems would have been solved very quickly. In Israel, though, nothing is done unless the threat is immediate. Since Hezbollah and Hamas launched rockets at Israel from Lebanon and Gaza, respectively, Rafael managed to deploy the first Iron Dome rocket interceptor system within less than three years. The Israeli researchers themselves are very capable. The problems appear, however, when the government gets involved and does not understand the threat.

In this case, despite repeated, urgent warnings from all relevant intelligence organizations, no one in the government did anything to have the system installed much sooner.

“Sky Shield” employs very advanced technology and it enables Elbit systems to offer variants of the system to specific uses.

* This version is the conjoining of a two-part article series on i-HLS.  Links to the originals may be found in the subheads above.