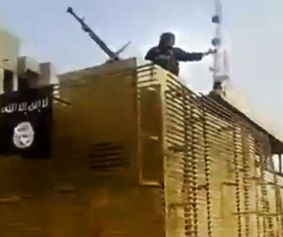 The European Union Ambassador to Iraq, Jana Hybášková, repeated last week her claim that European countries are “inadvertently aiding the Islamic State.” She claimed the Europeans are purchasing $3 million worth of oil a day, from areas controlled by the IS. She made this claim before the European Parliament’s foreign affairs committee.

The report is nothing more than scare-mongering at its worst.

Reportedly, Hybášková has chastised Iran, Kurdistan and Turkey for allowing themselves to be used to facilitate the export of oil produced by the self-proclaimed Islamic State of Syria and Iraq (ISIS, or Da’esh in Arabic).”  Furthermore, she noted that that there is no coordination of arms sales to the Kurdistan fighting force (Peshmerga), and, like oil, arms may not have found their way to the right people.

When confronted and urged to provide evidence to substantiate her contention, she could or would not.

The Turkish news agency Anadolu has quoted the Ambassador, denying her claim that the Islamic State is annually involved in the sale of $1 billion in Iraq and Syrian oil.  On reviewing her criticism of Iran, Kurdistan and Turkey “for being routes out of Iraq for Europe-bound oil tankers going by road,” Turkish Energy Minister Taner Yildizs replied, “Such claims are being uttered just to create controversy about Turkey’s policies. However, even before the UN’s decision, Turkey has not purchased oil from ISIS or al-Nusra”.

While it is true that in Syria the Islamic State controls the small oil and gas fields in the provinces of Raqqa and Deir Ezzor, that is not saying much.  The infrastructure there reportedly has been damaged during the long civil war.  Tangentially, it has been claimed that where the Islamic State collects oil it sells it at a huge discount (less than $40 a barrel).  In Syria it is sold to merchants, and in northern Iraq it is sold to one of the myriad mini-refineries found in the Sunni Triangle that emerged after the fall of Saddam Hussein.

A recent estimate that Islamic State oil sales from Syrian fields exceed 30,000 bbl/day seems exaggerated.  Finally, there is no report of a capture of Syrian oil being transported to Kurdistan, which was to be sold there or exported through Turkey.

In a fascinating essay on Kurdish oil, “Growing Potential For Kurdish Crude Exports,” John Saucer notes that the Kurdistan Regional Government has made startling progress in its effort to produce and export oil from its local fields.  After receiving approval from Ankara to access the Turkish pipeline that connects with the Ceyhan entrepot on the Mediterranean, KRG oil was exported through pumping capacity installed at Fishkhabur at the Iraq-Turkey border.  The KRG first shipped 1 million barrels of KRG crude, reported to have been offloaded at Israel in June. There followed “another 500,000 barrels” which was offloaded at Israel’s Ashkelon port in August.  In addition, “the Hungarian oil company, MOL Group, also purchased 600,000 barrels of Kurdish crude [in August] via Croatia.”  In sum, Turkish officials claim that already eight million barrels of KRG crude “has been transferred to eleven different tankers from storage in Turkey.”

Although KRG exports are considered “a trickle” in the greater picture of oil geopolitics, the future is quite bright.  Ironically, on macro level Kurdistan oil exports are seen as adding to the present lackluster trade in oil that results from static economic activity in Europe.  However, any serious effect Kurdish oil will have on the market is still a long way off.

Much attention lately has been paid to the United Kalavytra, a Kurdish charter found floating off the Texas Coast near Galveston. Its cargo, one million barrels of crude oil was enmeshed in a “legal limbo” until a Texas state judge threw out an order to seize the cargo whose export had not received the approval of the governments of the United States or Iraq. The vessel then disappeared with destination unknown. “LyondellBasell and Axeon Specialty Products were willing to import KRG crude before being spooked by the legal proceedings in Texas.”  Incredibly, and ironically, it seems the U.S. State Department is now content to consider KRG oil sales “a purely commercial rather than a diplomatic issue.”  With that, it is expected that future shipments of Kurdish oil will likely occur in smaller vessels.  What is certain is that Kurdish oil will continue to flow north.  Turkish officials admit that tankers continue to be loaded with Kurdish oil at Ceyhan.

As the KRG’s Peshmerga has helped to block the IS expansion, it is the feeling in Erbil that Baghdad “owes us.”  And if the Peshmerga assists in the recapture of Mosul, and its oil infrastructure, Baghdad will indeed owe the Kurds big time. In effect, the KRG will need the sale of Kurdish oil to finance its military and security forces and thus its own political integrity in the face of the Islamic State threat.  After all, the KRG now must maintain a nearly 1000 kilometer border—not with Baghdad but with the Islamic State that now sits between the two, from the Syria border at Rabiah all the way to the east of Baghdad and the Iranian border.  It is interesting to note that the pressure on the KRG was reduced recently when in late August the Kurd Hoshyar Zebari was returned as Foreign Minister in Baghdad in addition to the new President of Iraq Fouad Masoum, a founder of the Patriotic Union of Kurdistan.

Kurdistan’s oilfield and transportation infrastructure trends northwest (through Turkey) and not east (through Iran). To anyone familiar with the atmosphere in Kurdistan, and particularly the culture in Erbil, if the KRG were using Iran to market its oil (through Turkey or otherwise) that fact could not be held secret longer than twenty-four hours.  The claim that Iran is moving Kurdish oil has not been proved.

In Kurdistan the petroleum industry (including some American players) has worked feverishly to expand the flow of oil that connects with the existing Turkish pipeline.  In August, Turkey urged the US government to end its prohibition on the sale of KRG crude oil, and given recent developments it is now possible for the KRG to export 250,000 bpd without fear of reprisal. For that matter, Erbil is planning yet another expansion that will double that figure, and wants to increase oil sales to “around 1 million bpd by the end of 2015.”  This is in addition to the natural gas pipeline paralleling the crude pipeline to Turkey expected to be completed by 2016.

Most importantly, in resource poor Turkey the Kurdistan resource may eventually play a very significant role in the supply of petroleum products to the large Anatolian plateau region of central and eastern Turkey.  Thus, there is no reason, now or in the future, for Ankara to turn a blind eye to the illegal shipments of Islamic State oil, as it is perfectly aware that to do so would further exacerbate relations with the United States and its NATO allies.

In conclusion, the question remains: Will the Islamic State wax rich off the sale of captured oil?  I submit, not likely.