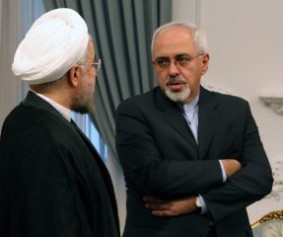 The U.S. resolve to deny Iranian aggression, especially its ongoing nuclear weapons development, is giving the Ayatollah Khamenei and his new government operative, “reformist” Hassan Rowhani, the rope with which to hang the U.S. The more Obama squirms away from the unpleasant reality of Iran, the tighter the noose gets.

Rowhani’s nomination of Hossein Dehghan as defense minister, should have made headlines in the NYT and the WSJ, but it didn’t.  Apparently they’ve forgotten Dehghan’s role in the 1983 Marine Barracks bombing in Lebanon that killed 241 American troops. Instructions from Tehran for the attack were sent to the Iranian ambassador to Syria, who passed them on to the Revolutionary Guards in Lebanon and their Lebanese Shiite allies.  Dehghan was in command of the Revolutionary Guards in Lebanon and saw to it that the actual bombers got the funding and operational training required.

That would seem to be a clear signal from Iran that its foreign policy would henceforth be far from moderate.” However, U.S. media and politicians chose to be distracted, or driven further into denial, by the Rowhani’s latest appointment of yet another “reformist”–Mohammad Javad Zarif as foreign minister.

Led by the usually (comparatively) reliable Reuters, the Zarif nomination has been flashed around the world as “an olive branch to the United States.” The reasons given by the cheerleaders for the new “moderate” Iranian government have to do with Zarif’s fluent English, familiarity with the U.S., a doctorate in international law and policy from Denver University, his wide net of political/social ties in the U.S., and central involvement in an attempt to negotiate a “grand bargain” (with Khamenei’s purported blessing) between Tehran and Washington that began after September 11, 2001, and foundered in mid-2003.

iran’s duplicity, as in previous talk, resulted in another faliure. But this didn’t stop Nicholas Kristof of the New York Times from blaming U.S. neocons, for being in Iraq in the first place. But then, “it was because of Cheney and Rumsfeld” has become scriptural.  The facts that Saddam Hussein was ousted (and no longer a worry to Iran) and that Tehran had never intended to negotiate or give up the development of its nuclear development is not mentioned.

In addition, Zarif’s nomination has been taken as more than just affirmation of Rowhani’s intention to “make a deal” with the U.S.

Zarif has been embraced as the one Iranian official who’s “just like us.” This is due to his long courtship of American contacts.  As Reuter’s put it, Zarif is “Tehran’s leading connoisseur of the U.S. political elite,” and notes that his “contact book” includes the likes of Joe Biden and Chuck Hagel, and assorted congressmen of both parties.  Brent Scowcroft is reported to have called him “reasonable.”

Veteran Middle East negotiator Dennis Ross has been more cautious: “Zarif is not someone who does favours for the United States. He fits the category of a sign or signal until you see Iran actually doing something.” But is Ross cautious enough?

It seems that the U.S. will acknowldge the Iranian deception only when Iran will actually use its first nuclear weapon. And that probably only when it is used against the U.S.

One doesn’t have to be an Iranian affairs expert to understand that Zarif’s nomination is just another of Iran’s ways of stalling while it races toward nuclear capability. Yet, the chorus of “experts” in the U.S. like most other countries seems thrilled with Rohani’s “reformist” choices for his cabinet. Except Israel.  The more wolves in sheep’s clothing it introduces, and the more willful blindness is practiced in Washington, the better for Iran.  Rowhani’s own duplicity in his role as nuclear negotiator back when seems to have also been forgotten.  Similarly, the occasions on which Zarif has shown that he’s no different than Ahmadinejad are being ignored.

While speaking at Columbia University in 2006, Zarif was asked if he personally believed six million Jews died in the Holocaust. His reply was, “Well, I believe a great atrocity was committed in the Second World War. The question that needs to be asked is, What is the crime committed by the Palestinians in that atrocity?”  When pressed to acknowledge the Holocaust, he admitted that, yes, Jews in Europe died, and then said, “But this is the question that you do not want me to answer: What was the role of the Palestinians in that? … Palestinians have been suffering because of that without having any role in it.”  As with Rowhani, there’s no way of seeing this “moderate” as any different than Khamenei or Ahmadinejad. That’s the prerequisite for anyone in government or representing Iran. As for Zarif’s “contact book” in Washington, it would be nice to hear more from and about his U.S. friends, for example, Trita Parsi of the National Iranian American Council (NIAC).

The Progressive Iranian-American Committee’s website has an interesting item on Parsi’s communications with Zarif to push the Iranian agenda and lobby Congress and the administration when he was Ahmadinejad’s ambassador to the United Nations. NIAC also has close ties with the New American Foundation and even with George Soros.

While the international media celebrates the nomination of Zarif, Iran proceeds as usual.  Recent reports detail of Robert Mugabe-controlled mines in Zimbabwe, deal to sell uranium to Iran. (Zimbabwe’s state radio denies this.) The IHS Janes report that Iran has built a previously undisclosed launching site and space center near the Caspian Sea that can be used for testing ballistic missiles. Hamas, which has lost its Egyptian Muslim Brotherhood patron, is requesting greater Iranian supoport (again). This time for its campaign to turn the Sinai Peninsula into a jihadist stronghold. This is all of course in the name of “reform”.

The American media and adminstration are acting as useful idiots by furthering the Iranian “reform” deception. The more adulation in the American press, the more credibility is given Iran’s corruption of the meaning of “reform,” and gives Iran the advantage of tightening its nuclear noose around our neck.