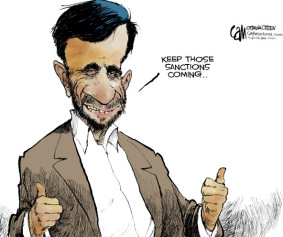 The rugs under President Obama’s vows to stop Iran from developing nuclear weapons are being pulled out constantly. Last Monday, former EU High Representative for Foreign and Security Policy, Javier Solana, pointed out that the negotiations between Iran and the P5+1 group (Britain, China, France, Germany, Russia and the United States), scheduled to begin this week in Almaty, Kazakhstan, are in fact, a waste of time.

The Iranian leadership is facing elections in June and “It will be very difficult to get something going before those elections,” noted Solana. Fully aware of this, the administration will be in Almaty. And if the past is any precedent, further concessions will be made to give Iran more time. After all, Obama had already announced that he had pulled back the red line on Iran’s nuclear weapons development for a year or so.

Meanwhile, the sanctions regime continues to slip. As the past few years have shown, the Iranians are extraordinarily capable of evading the sanctions. Despite the spiraling inflation, and imposed restrictions to acquire the goods in kind, the Mullahs persist.

The Economist recently gave an example of how Iran operates. Iraqi trucks carrying oil for export crossing through Iran, are furnished with a bill of lading. The Iranians copy and reuse the Iraqi documents in order to disguise their own exported oil as Iraqi. An Iranian businessman named Amir told the Economist: “‘The Europeans send our cargoes to Dubai, documented as the final destination. From there we are in charge.’ Amir uses Gulf middlemen to change the documents, for a fee of 3-5%, before the goods are shipped to Bandar Abbas, Iran’s largest port.” The moral of the Economist story is that all illicit goods can be both imported and exported by Iran, for a price.

Here are a few more of the myriad latest examples of sanctions violations.

* Swiss-based Vitol Group, the world’s largest oil trader, has been buying and selling Iranian fuel oil. Last month it bought 2 million barrels and offered it to Chinese traders. Vitol is not obligated to comply with the EU ban imposed last July because Switzerland decided not to match EU and U.S. sanctions against Tehran. In this case, exceptions to sanctions come close to making all the difference.

* In January, Europe’s General Court told EU governments to lift asset freezes on Bank Mellat and Bank Saderate, two of more than a dozen Iranians banks the EU says help finance the nuclear program. The court ruled that the EU failed to provide sufficient evidence the banks were involved in financing the nuclear program. Other banks were “defrosted” earlier and expect more soon, as the Iranians leave no stone useful to evasion left unturned. The Europeans, who reluctantly joined the U.S. sanctions, would happily resume business with Iran.

* After laying off in January out of fear of new U.S. sanctions,Turkey is back busy exporting gold to Iran to pay for natural gas–$120 million worth in February, for example. The fear in January was that the new sanctions would replace the six-month waiver the U.S. had given Turkey on trade with Iran (due to expire this coming July).  Gold exports from the United Arab Emirates, a transit route to Tehran, were at $402 million in February, up from $371 million in January.

* In mid-March, the U.S. blacklisted Greek businessman Dimitris Cambis for using Iranian front companies to purchase 8 old oil tankers that were covertly filled (at sea) with Iranian oil for shipment abroad. Cambis is accused of fronting for the National Iranian Tanker Company. According to our estimates, those 8 tankers taken together could hold $1.6 billion in Iranian crude oil a trip.

* The smuggling of diesel fuel out of Iran and into Pakistan has now become so lucrative that some Baluchis have dropped opium smuggling: “Why smuggle opium when you can earn as much money by smuggling diesel? It’s much safer.”

* The Chinese are increasing their crude oil purchases from Iran. They pay cash, not “in kind”.

Finally, Iran, in cooperation with Pakistan, is building a gas pipeline to export to Pakistan. This will double Iran’s gas export and account for 10% of its oil revenue. The financing of the $7 billion pipeline comes from Iran and China, and the Chinese will help construct the pipeline.

The State Department, in yet another empty gustier, announced today that it will “consider” sanctions against Pakistan. No one takes it seriously, since the U.S. needs Pakistan’s cooperation while withdrawing from Afghanistan.

The Obama administration’s frequent and empty threats have led to diminished credibility. It seems that the administration’s ambition to be ‘just another country’ and downgrade the U.S. status as a superpower, is being fulfilled.

WSJ: Closing U.S. Ports to Iran-Tainted Shipping. States can deny docking privileges to the ships of companies that do business in Iran.

Benjamin Weinthal: Most of Europe reluctant to crack down on Hezbollah despite growing threat

Claudia Rossett: At the U.N., Iran Is a Powerhouse, Not a Pariah
The world’s leading state sponsor of terrorism heads the General Assembly’s second-largest voting bloc.