The Illicit Drug Economy & The Case Against Cornflakes 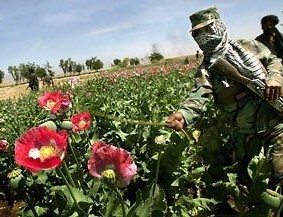 Societies, in general, take a long time to recognize a new problem. They take even longer to acknowledge a problem that has been ignored, denied and excused for a long time, and reluctance to embrace effective solutions prevails. Sometimes reasonable doubts are raised but, most often, objections are promoted by vested interests.

Illegal drug trafficking is not new. Its devastating effects on the individual are sometimes attributed to overindulgence, or illness; and the accumulative harm and cost to society have been ignored for a long time. The different “wars on drugs” have failed for many reasons but, most notably, because they were fought half-heartedly and ineffectively. The enormous sums of money involved in the drug trade, and in fighting it, have always had major influence.

Afghanistan supplies 90% of the opium and heroin global markets.

The Afghan farmer who grows opium poppies could earn as much as $230 for a kilo to opium. Processing the opium into heroin turns it into one of the world’s most profitable commodities, fetching between $175,000 and $850,000 wholesale depending on the level of purity and availability. By the time heroin reaches the user, after the drug’s purity is substantially diluted to about 33% with powdered calcium or other substances, one gram could cost as low as $150 to $250 ($15,000-$25,000 a kilo, and $250 million per ton). An average user consumes 1-2 grams per day. Prices could be much higher in cash-rich places like Dubai and other Gulf states.

So, where does this huge amount of money go?

The U.N. and the U.S. Department of State annual drug reports have persistently underestimated the production of and revenues from opium heroin and hashish (another major Afghan export).

Similarly, Western governments, including the U.S. and international agencies, have for decades ignored and sometimes even denied that terrorist organizations, including Muslim terror groups such as Hezbollah, al Qaeda, the Taliban and their ilk, use the illegal drug trade to fund their activities.

This halfhearted willingness to face reality did not change the prevailing attitude that illicit drug production is force majeure, not a “man-made disaster” that is stoppable and reversible.

Walton Cook, a public policy and security writer, has been studying the economic implications of the international drug economy for decades. Here is the case he made in 2004 for a different approach.

The Case Against Corn Flakes*

There’s a recent TV commercial lampooning how significant strides in technology are often, at least at first, rejected. One shows a man, obviously an inventor, in a 19th Century Victorian setting, a circle of stern-faced businessmen listening to his presentation. He tells them he has found a way to turn corn into a new, highly tasty product in flake form. He has called these flakes, why of course, corn flakes!

He waits for a response….Finally; the assembled Victorians break the eerie silence, erupting into hilarious laughter!  As an aside, one says: “Pretty soon, someone will want to bottle the water.” Their raucous, high-pitched laughter emerges anew.

Flash forward to the present. Plant scientists have developed technology intended to prevent the cultivation of narcotics producing plants, primarily the coca shrub and the opium poppy. They accomplish this by inoculating the soil in advance by aerial seeding-therefore making future plantings of specific plants either impossible or uneconomic. It is important to note that this has been lab and field tested without anticipated harm to non-targeted plants, animals or humans, other than to cut off the monies derived from the cultivation of said plants.

Perhaps one must remind a reader that every committee, commission or expert on criminality and terror is quick to point out that many acts of crime or terror are often financed through the trafficking of narcotics. That judgment includes the 9/11 Commission report. It is probably not necessary to say that we are engaged in a war. It is probably sardonic to suggest that the aim of war is to win, including cutting off an enemy’s sources of financing for its acts and its army.

Nonetheless, we are daily reminded that more attention by far is placed regarding WMD and terrorists we cannot find, than those which we can. Proof of that is simple: every major narcotics cultivation area can be pinpointed precisely on a map, identified by GPS and spectral imaging. Unlike other weapons, those that finance terror are easily found and unambiguously identified. Yet we continue to claim (particularly at the highest political levels) there is nothing we can do.

If we are talking about narcotics use and abuse, it is true that we have not done well in preventing people, even our own citizens, however thoughtlessly, from drug use, supporting the murderous aims of our enemy. Judge Richard A. Posner has made this point in his New York Times book review of the 9/11 Commission Report.  However, even in a rather astute analysis of our war, Judge Posner fails to consider that solving the narcotics/terror problem at the supply end has become as easy in our era of modern genetics and agriculture as was (and is) making corn flakes for Victorians.

Perhaps many can be forgiven for not knowing that, but none should be excused for not taking it into account when it is known. In simple terms, we can control the cultivation of narcotics, and thus a major funding stream of terror–to say nothing of lives lost or harmed. The operative question is whether or not some future Commission should dare conclude that future 9/11 equivalents could not have been prevented, that we just couldn’t connect the dots between the financing source and the ability to commit acts of mass murder?

Even taking narcotics to the level that, just for the sake of argument,  we would reverse the known facts; that narcotics cause human physical damage and societal damage; and to conclude conversely that they were good and nourishing, let’s say like yummy corn flakes, one would still have to reach the same conclusion in a time of war. That is because if it were corn flakes that was financing terror, even if we liked them, they would have to be eliminated. That too, is a fact!

*This was a response to Judge Richard A. Posner comment,The 9/11 Report: A Dissent, which was published by the New York Times in August 2004.